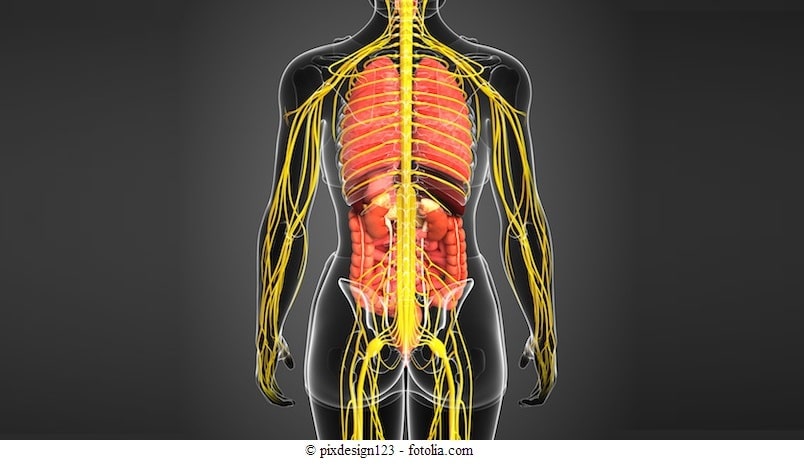 Multiple sclerosis (or encephalomyelitis disseminata) is a degenerative disease that affects the myelin sheaths of the nerves (Weinshenker – 1996).

As a rule, it is a youthful illness, because it mainly affects people between 20 and 40 years of age.

When do you have to worry? First symptoms of multiple sclerosis

The first symptoms are:

blurred vision
Optic neuritis, the inflammation of the ocular nerves, is a common initial symptom.
At the beginning, the patient may have double vision or a cloudy view, usually the problems only show up in one eye.
As the disease progresses, eyesight continues to decrease, but total blindness is rare.

Numbness and ant tingling
You may notice itchy discomfort, a burning sensation on the feet and loss of sensitivity.
The symptoms kick off usually on the lower legs or arms and run along the limbs.
The Lhermitte sign is caused by cervical spine lesions and refers to the feeling of electrical shock that runs along the back and legs. It arises when the cervical spine is prevented.

Muscle weakness and spasms
Patients may experience muscle weakness, as well as heavy and tired legs.
People with multiple sclerosis sometimes limp and have difficulty moving their fingers.
The muscle cramps and stiffness are particularly evident in the legs. Patients have difficulty speaking because the tongue muscles are weakened and have less coordination.

Problems of balance and coordination
The patients show an insecure gait with difficulty walking and balance problems.
Multiple sclerosis sufferers may have difficulty grasping small objects.
These problems can aggravate other symptoms, such as dizziness and tremor. Ataxia (loss of muscular coordination) and tremor affect more than half of the patients.

Bladder and bowel problems
Some patients have difficulty in emptying the bladder (urinary retention) and intestines (constipation) or find that they cannot control them.
Patients with severe incontinence often have to urinate or are unable to get to the toilet quickly enough.
Urinary problems and the use of a bladder catheter in the event of urinary retention can lead to infections (e.g. cystitis).

Pain
Many patients experience punctual pain that can occur continuously or intermittently.
MS complaints also include trigeminal pain (on the face), spasms and severe cramps, feelings of pressure, itching, burning and shooting pain.

mood changes
Depression is widespread and sometimes severe.
This can be caused by physical changes in the brain as well as an emotional reaction on the Life be with this disease.
Psychosis (depression and paranoia) is less common.

How does MS manifest itself in children??

The course of the disease is very variable (Goldenberg – 2012). Some people have a first flare and after that the symptoms do not appear for many years, while in other cases there is a constant deterioration with periods of remission or short stabilizations.

Factors that trigger a surge

Some patients believe that the recurrence of MS (relapses) is triggered by certain factors.
Triggering symptoms include:

Heat and cold
Sudden changes in temperature or humidity can trigger the symptoms.
Many patients with MS have an intolerance to heat and find that heat exacerbates symptoms.

People with multiple sclerosis can develop the following complications:

Effects of pregnancy on MS
Before 1950, all women with MS were advised to avoid pregnancy because they believed it could worsen MS.
Over the next 40 years, many studies were done on hundreds of women with MS, and all of them came to the same conclusion: that pregnancy reduces the likelihood of developing MS, especially in the second and third trimesters.