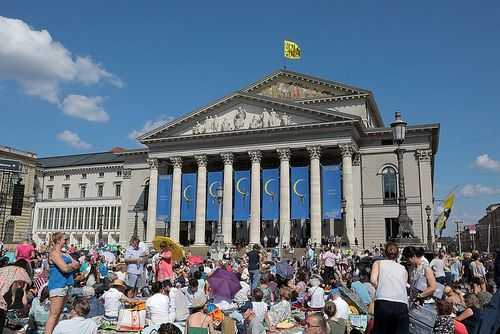 Klaus Schedl, born in Stuttgart and now living in Munich, composed the first part. And who converses with him, does not get the impression, as one of those typical goodwill eco-pathos manifests. “I’m concerned with a fundamental criticism of our attitude towards life,” says the 44-year-old. “That’s going to be quite loud, just because it’s supposed to hurt.” Among other things, four large bass boxes will hammer visitors in the environmental problem in the double sense. Schedl: “I feel hard as an aesthetic possibility – and therefore as beautiful.”

With the composing, designing and writing “Amazon” colleagues, Schedl visited the Yanomami. About “500 square kilometers of purest nature” was amazed, shamans met, and some even for us brutal habits of the tribe heard. And find out how threatened this enclave is. The basic theme of “Amazon” busy Schedl already longer – even if he had not specifically thought of a primeval forest tribe. “The growth problem haunts me. This always-on, this yawing for progress. That does not have to be, shows the life of the Yanomami, where one understands: one does not have to go on and on. “

The three parts of “Amazon” are written from different perspectives. “Tilt” thematizes the view of the conquering Europeans on the South American original culture, “A Queda do Céu” is conceived from the point of view of the Yanomami, the “Amazon Conference” of the third part deals with the future. Three parts, three perspectives, three musical-literary styles. Schedl, who wrote “Tilt”, sees himself as a collector. “I basically work with small garbage piles,” he says with a grin. With sound, sound and sound fragments combined on up to 50 soundtracks simultaneously. Again and again, this material is heard, combined, sorted out, until the finished work equal to a “Auskratzung” (Schedl) arises. “I just want to expose myself to perception. And for that very reason, I am not interested in constructive composition, in excessive structures. Maybe that was a maze of modernity. “

For Schedl’s “Amazon” section, he promises, among other things, “hard-rough vocals” in the style of heavy metal. “I just wanted a very direct, unmistakable musical language.” “Tilt” is based on an expedition report by the Englishman Walter Raleigh (1552-1618). He explored the Orinoco at that time, came to an area near the Yanomami and thought this was the area that the Spaniards called “El Dorado”.

Whether the “Amazon” project, which by the way continues to move to São Paulo, Lisbon and Rotterdam, reaches its ecological goal, perhaps also expanding the interest of the Biennale? “I hope so,” says Schedl. And admits that all this is contradictory. “We project participants also have to be self-critical – after all, we also consume vast amounts of resources and electricity.” And what does nature mean for Klaus Schedl? “Calm, a form of being lifted. It’s schizophrenic to use something aggressive for that kind of sound, right? “

The Munich Biennale sees itself as a testing ground and first music theater podium for composers and was founded by Hans Werner Henze, the doyen of the contemporary masters. In 1988 the first festival took place – with huge success. The works of Adrana Hölszky and Detlef Glanert were often re-enacted: not a matter of course in contemporary music. In the following years, today prominent composers such as Tan Dun, Jan Müller-Wieland and Hans-Jürgen von Bose took part. Since 1996 the composer, conductor and music manager Peter Ruzicka has been conducting the Biennale, which takes place every two years.

Grandiose, threatened landscape: “Amazonas”, the most elaborate project of the Biennale, deals with an Indian tribe that lives on both sides of the river.