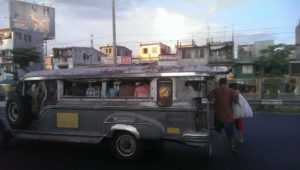 My very first trip to the Philippines – Part 1

Two without a plan in Manila – a travelogue

How it all started is always such a question … But this time I know exactly.

I could call it a lovable disaster too. Today I can laugh about many things.
Even so, even if I had never believed it at the time, this trip was to change my life, I stayed for over a year, and for the rest of my life, I will be connected to the Philippines. Alone through my husband and son.

In October 2012 I happened to have a YouTube V >Manila booked. I had been on vacation in Thailand the year before and made the mistake of assuming that the countries were somehow comparable.
Of course we then made ourselves smart during the travel preparations over the country. (Malaria prophylaxis worried and so on.)

We had to book one night in Manila and the first onward flight to Puerto Princesa before and the rest spontaneously on site. As travel destinations we chose El Nido, Bohol and Siquijor in 4 weeks.

Once in Manila, the first challenge awaited us, behind the wall of heat and humidity leaving the airport, at the taxi stand. Immediately we were talked on from all sides. We actually must have looked helpless because I could swear the taxi drivers had dollar signs in our eyes at our sight.
We quickly decided on a very toothy elderly man who had our suitcases in his car even faster.
When I called Alfredo, our driver the address of my booked hotel, he hesitated. “Maybe not so good” and suggested that he show us other hotels. (My booked hotel was a motel, but we did not realize the exact meaning of the word until later.)
Since I was the one of us two girls from Munich who had ever been to Asia, I took the initiative.
“No, this hotel has good reviews on Agoda (which I did not read) and it only costs 15 Euros the night. We travel as backpackers, but we do not feel like hostels with shared rooms. “In Thailand you can also find decent hotels for 15 euros the night …

Well, we have fixed a fixed price of 1500 pesos for the rather short distance and were relieved that Alfredo apparently did not want to rob us or kill us.
Because of a roadblock, we made a small city tour and kept looking forward to a money changer where, of course, Alfredo’s friend / cousin / nephew / brother-in-law worked.

When we finally reached our hotel I could not see a hotel. “Where?” I asked and Alfredo pointed to a kind of parking garage with underground parking.

While we were digesting the shock, our nice Alfredo quickly wrote his phone number in my guidebook. (Which I had not read so well, Jens Peters, is very fat) If we needed help, because we remind him of his daughters, he said.
The next morning he could take us back to the airport, 1500 pesos.
Ok, we were all right, now only in the bunker. 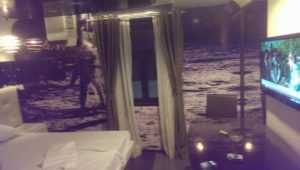 In the parking garage was the “hotel lobby”. The two employees at the “reception” wore uniforms like in a 60s cinema. We were escorted to our room in the basement garage and came to me in the sense that I had chosen this accommodation because of the themed rooms I found cool.

Over an empty parking bay, a steep concrete staircase went up to the side where there was a door. Our room was just above the parking in the underground car park … in the underground car park.
We had the room with the motto “moon landing” caught, was somehow suitable. There was even a small window with a magnificent view of the opposite parking bays. 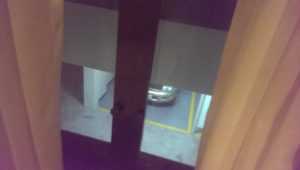 After the “hotelboy” disappeared we wanted to lock the door, which unfortunately did not work. We had no keys or card and we saw no other way to lock the door. At the door hung, however, under the spy a blue-yellow sign with the friendly note: “For your security, View first before you open the door.”

While my girlfriend was on the brink of a hysterical fit, I mocked back to the lobby and described our problem with the key. I received the information you can unfortunately lock the door only from the outside. How convenient! 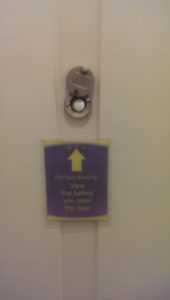 “View first before you open the door”

Back in our moon landing space capsule, we smoked first with half a pack of cigarettes, for the nerves.
In fact, or maybe because we were so tired from the flight, we slept the night quiet and undisturbed afterwards.
Punctually the next morning, Alfredo drove up to take us to the airport for our flight to Puerto Princesa.

We had survived the first night in paradise!