Werdohl – Nurgül Yenigün (36), a native of Werdohl, has published a new book. After her book of poems "Ana" she wrote a novel this time – again in Turkish. In "Yasemin’in Savasi" ("Yasemins fight") she tells about the fate of a young Turkish woman.

Around a year and a half ago, Nurgül Yenigün published a volume of Turkish poetry in which she processed her grief over her mother’s death. Even now, the 36-year-old dares to tackle a difficult topic again: "Yasemin’in Savasi" covers 380 pages on child labor, forced marriage, torture, violence, abuse and incest.

Yenigün describes in great detail exciting, exciting and sometimes heartbreaking moments. According to Yenigün, it is the story of the real life story of a young Turkish woman who lost her mother when she was seven and had to finish school to work at ten. 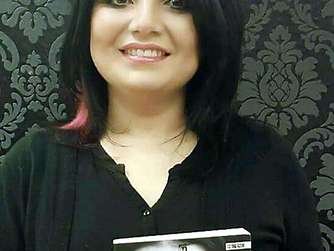 Her stepmother married her to a man at the age of 13. Such a forced marriage is not uncommon in Turkey. According to a study by the women’s rights organization Kamer, which interviewed the 58,000 women in the Kurdish south-east of Turkey, 4,711 women reported being married at the age of 16 or 17. 2217 had even been married by their parents at the age of 13, 14 or 15, although this is officially prohibited in Turkey.

Nurgül Yenigün, who wrote the book under her birth name Sönmez, also knows such numbers. "There are thousands of Yasemins who have been affected, who have had or still have to experience this or a similar fate," says the author.

Yenigün is looking for sponsors for a sequel novel

She was honored to have been able to summarize the life story of Yasemin in this novel. And she has already planned a sequel to be called "Yasemin’in Intikami" ("Yasemins Revenge"). To realize this project can, Yenigün is still looking for sponsors who want to get involved with amounts starting at 250 euros.

Nurgül Yenigün, who attended primary school in Kleinhammer and then the Albert Einstein comprehensive school on Riesei, would like to read her book on Sunday, 6. March, on the occasion of the upcoming International Women’s Day in Werdohl.

From 3 p.m. there will be an author reading in the city library, organized by the Turkish Women’s Association Werdohl. “Werdohl is the city where I was born and grew up. That’s why Werdohl is so special Meaning of me, ”she says. Afterwards there will be reading days in Altena, where Yenigün now lives and works.

Screenplay for her novel is in the works

Incidentally, Nurgül Yenigün, whose parents came to Werdohl as guest workers in 1969, only learned Turkish as a teenager. Today she is one of the best-known writers in Turkey, in April she wants to sign autograph sessions on the Bosphorus and take part in book fairs with her publisher. Even a screenplay for her novel is in the works. By the way, your books can be borrowed from the Werdohler city library.

So far, "Yasemin’in Savasi" is only available in Turkish, but it doesn’t have to stay that way. The author would also like to publish her book in German. "Unfortunately, I don’t have the time to do the translation work myself."