On the threshold: Rembrandt, return of the prodigal son (1636) 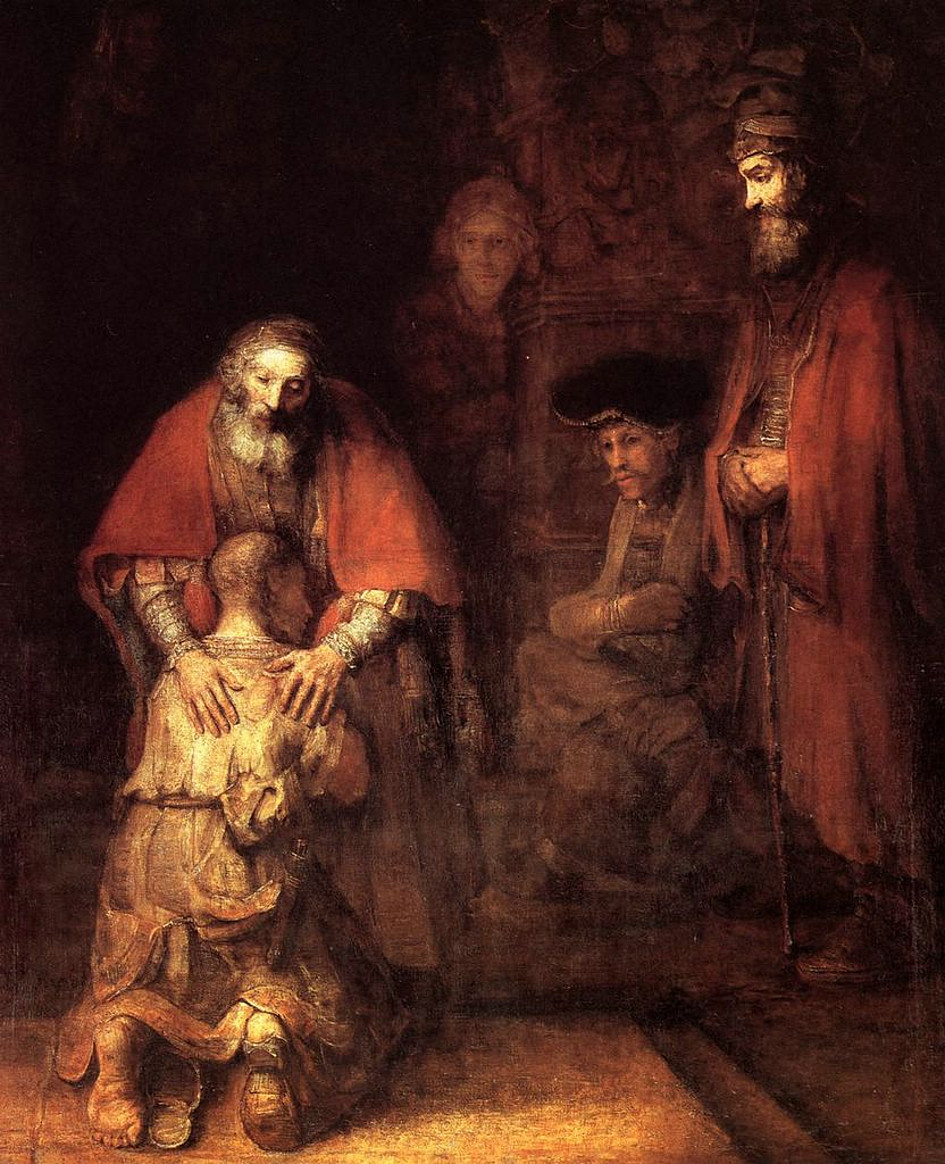 Rembrandt, return of the prodigal son

Rembrandt does not let go of the topic "The Prodigal Son", it remains one of his favorite subjects, which he works on in numerous drawings and etchings. In the year of his “self-portrait” as a “prodigal son” in 1636, Rembrandt also depicts in an etching the “homecoming of the prodigal son”. He lets the encounter between son and father play on the threshold of the house; this is again "against the text" of the gospel, where it says: "The father saw the son come from a distance,. he ran towards the son ”(Luke 15:20).

The threshold is clearly the place between "outside" and "inside", between the "world" and the "father’s house"; the completely dilapidated son kneels exactly on the border, his stick still shows where he comes from. The father’s posture and gestures are touchingly human – the far step shows the hurry, the left one hand supports and wants to help the son, the right one is soothing – tender on his shoulders. At the same time, there is more than “just” humanity: if the bending down father were to stand up, he would be of monumental oversize. And Rembrandt has framed the moving and moving moment of the encounter, “immortalized” through a very strict composition: the father-son group is inscribed in an almost equilateral triangle; this is both the "most stable" geometric figure as well about that also a symbol of the divine.

Our last picture is really a "last picture": In the last months of his life Rembrandt – he died in 1669 – started to paint the "return of the prodigal son" in an unusually large format (262 x 206 cm). He can no longer cope with this, his "last word". This alone is moving and touching: For a whole painter’s life, the artist is occupied with this story, in a sense he identifies with it. And then at the end this conclusion! This unusual biographical seriousness of the work is almost a little awe-inspiring. Here an old man summarizes his life experiences with all ups and downs. And he speaks of his hope beyond this life. This corresponds to the interpretation tradition of the parable; the story of the prodigal son is seen as a picture of the human way of life and the "homecoming" as a homecoming to God at the end of life, interpreted as an entry into "eternal life". A work of art as a personal confession!

The painter says: Death, whose proximity I feel, will be me lead to god, i will experience his love and kindness, he will receive me with all my miserable story. Due to the unusual format, the figures in the picture are almost life-size. The son kneels as a back figure on the left edge of the picture, so that it is easy for the viewer to identify with her, so to speak to slip into it. An image, a story that we can relive, “empathize” with. I think that is the most remarkable thing about this picture: it all comes down to “feeling”. There is nothing to "see" for father and son. The son snuggles into the darkness of the father’s lap, the aged father has lowered his eyelids and looks like a blind man who feels the son. This concentration on touching, feeling and feeling is an unusual thing for a painter, who has had to be concerned with seeing and the visible throughout his life: the insight, so to speak, that there are dimensions and layers of reality that are closed to the eye stay and still are real. Similar to the etching from 1636, there is evidence of "more" in all the "humanity" of the scene. This comes very easily into the son’s almost demonstratively pulled out sandal, which reminds of Ex 3.5 – Moses on the burning thorn bush: “Take off your shoes; because the place where you stand is sacred ground ”. The father with the red cloak appears like a protective mantle; the outline of the mantle is congruent in the composition with the archway in the background. The gesture, which is fleeting in itself, is thereby solidified, given something final, eternal. This is happiness now that fear of loss can no longer be affected. This also corresponds in part to a human experience: that something that has been lost and found again can no longer be lost.

Incidentally, here too – as in the etching from 1636 – the scene plays on the threshold, at the entrance. This signals: The story does not end here, it begins anew here. The best is yet to come: the festival! Will the "big brother" take part in the festival? We have never mentioned him until now, and the artists, like the whole tradition of interpretation, have neglected him very much. The story is told for his sake! Jesus speaks to the "Pharisees and scribes" who cannot understand his attention to "tax collectors and sinners" (cf. Lk 15: 1f.). In the final scene of the parable, the painters often showed the “older brother” how he brusquely turned away from his father and brother. In Rembrandt’s picture we see in the group on the right a thoughtful man who is distinguished by the same red coat as his father. Is that maybe the "older one"? Is he moved Let him be impressed by the love of the father and move to take part in the "Festival of Reconciliation"?

from: Herbert Fendrich, human stories – stories of God. Pictures of the parable of the prodigal son