The team will try to win the fifth World Cup title for Germany at the World Cup in Russia in summer 2018. After the 2014 World Cup in Brazil, there is a lot of pressure on the German national soccer team, because soccer Germany is waiting for the title defense. Since the DFB is apparently superstitious, the supplier adidas has been commissioned to design a new DFB jersey 2018, which reminds of old tournaments and their successes for the DFB national team. The result of the new home jersey 2018 for the World Cup is a retro jersey, which is reminiscent of 1990. The new away jersey is again reminiscent of the late 80s and early 1990s, when the national team was very successful and won the third star in 1990 under team manager Franz Beckenbauer. Now we finally know the design of the new green away jersey 2018. 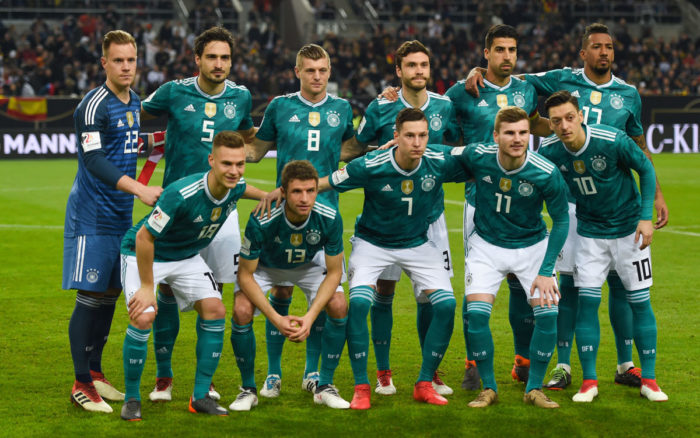 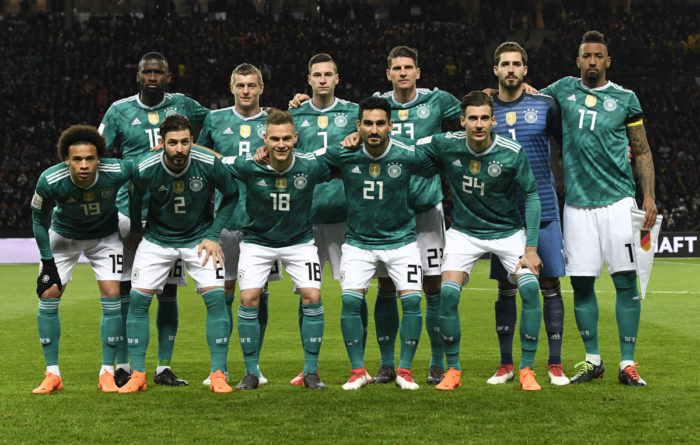 2nd time in the new away jersey: The German starting line-up of Germany against Brazil on March 27, 2018 in Berlin in the new DFB Away jersey (Photo AFP)

Table of contents – you can find it here

What does the new DFB away jersey 2018 look like in green??

There were no official statements from the German Football Association and adidas until March 23, 2018, until the German national team played in the new away shirt for the first time in the friendly against Spain (result 1-1), even though it had been the white home shirt since the middle November 2017.

The national team wear white shorts and green socks for the new DFB Away jersey 2018. On the chest in the middle you will find the golden FIFA badge, on the left the DFB eagle and the four master stars and on the opposite side the adidas logo. The three Adidas stripes can be found on the shoulders, the collar will be white.

So this is what the new green DFB jersey looks like:

The new green DFB jersey in the video 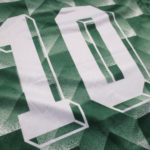 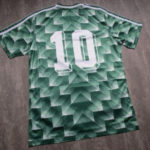 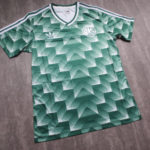 If you look closely at the new away jersey, you can clearly see the retro style: diamonds all over the jersey are incorporated in a dark green with several shades of gray. Apparently the designers at adidas liked this grid because the away shirt from Manchester United also looks enormously similar to the German. 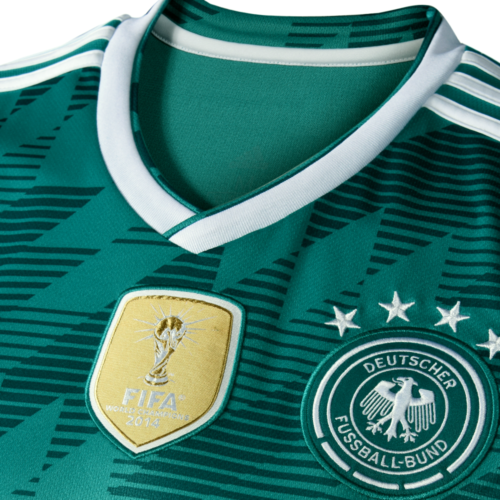 The new DFB away jersey with the golden FIFA badge and the retro design from 1990.

When will the new DFB away jersey 2018 be available?

Sales will start on March 20, 2018, it should cost 89.95 EUR, without flocking the shirt number and the player name. The jersey will be available from specialist retailers from 27.3. sent. While the white home kit has been available since last autumn, manufacturer adidas has officially increased the prices of the World Cup jerseys. The next international matches against Brazil and Spain at the end of March are guaranteed to herald the sales season. The versions for men (sizes S to XXXL) will again be published as replica and authentic jerseys, there is also a version for women (sizes S to XL) with a wide neckline and children’s jerseys. The jerseys for children will be cheaper and will be available in three different versions, which differ in size and features: teenagers, toddlers and babies (mini-kit including pants). 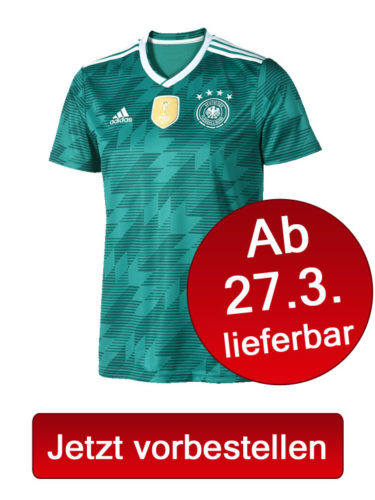 Why is the 2nd jersey also called the away jersey??

Each team must bring two significantly different looking jerseys to the World Cup in Russia. FIFA calls the two jerseys 1st and 2nd Jersey. In German, on the other hand, the two jerseys are called home and away jerseys, which is simply because every soccer team normally has a jersey that is worn in the home stadium. If you play on a foreign pitch, the 2nd shirt is used. However, this is only theory. If the away team’s home jersey looks different in color than the home jersey, then the visiting team can also wear the home jersey. Bayern Munich (red home jerseys) usually play against Borussia Dortmund (yellow home jerseys) in the red jerseys, no matter where you meet.

This is also called Away jersey (which is english) too third kit, which is worn when the opposing jerseys are the same color.

When will the German national team play for the first time with the new DFB away jersey 2018??

The reigning world champion Germany will play the first two international matches against Brazil and Brazil on March 23 Spain at least once the new one DFB away jersey wear. Brazil’s home jersey is yellow, Spain’s home jersey is red, so Germany could actually appear in the new white DFB jerseys 2018. For reasons of marketing and popularity, the DFB will certainly let their team play in the green jerseys.

Often you will new away shirt not see, the current away jersey of the EM 2016 and the Confed Cup 2017 was only worn three times.

What colors were the last German away jerseys from the World Cup?

In the past few years, the away jerseys were mainly black (or gray), red and green.

What is the font for the jersey numbers and the player names?

Adidas has come up with something very special for all World Cup teams: a real retro Russia font that is supposed to be reminiscent of old Soviet times. The square font should make the shirt numbers clearly recognizable from a distance and still look modern.

Shorts and socks in white and green

A jersey set is only complete with pants and socks. The team’s shorts are white again, the socks are green. The short has the DFB emblem with the four stars on the right and green Adidas stripes on the side. The socks are green with light stripes at the knee end, the lettering "DFB" is just about everywhere on the soccer shoes. The socks cost EUR 17.95, the pants cost EUR 39.95. 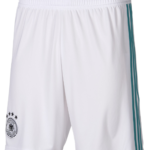 The new DFB Away jersey 2018 for women

Of course, the DFB also thinks of the many female soccer fans in front of the screens and the public viewing places. Because the new DFB Away jersey for women has also been given a wide neckline and a narrower cut in 2018. A real eye-catcher! Because with the golden FIFA World Cup badge the jersey looks really classy!

The new DFB Away jersey 2018 for children, toddlers & Babies

The small children and babies also want to keep their fingers crossed for yogi boys! This works best in the new away jerseys for the kids, which are again available in all sizes. The little ones get the mini kit, which consists entirely of jersey, white shorts and green stockings.

Those were the leaks before the official release on March 20, 2018

The first unofficial photos – so-called leaks – were already illegally published on the Internet in 2017. 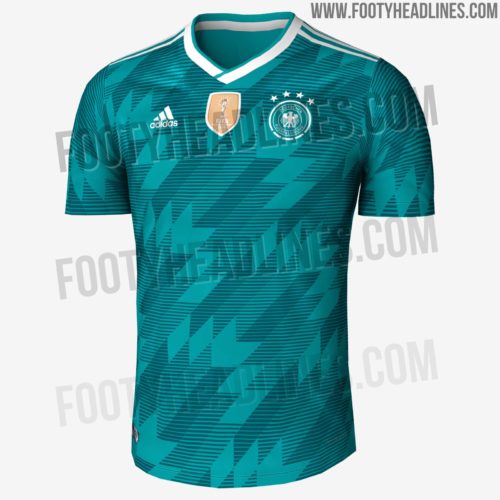 The new DFB away jersey 2018 from adidas will be green again.