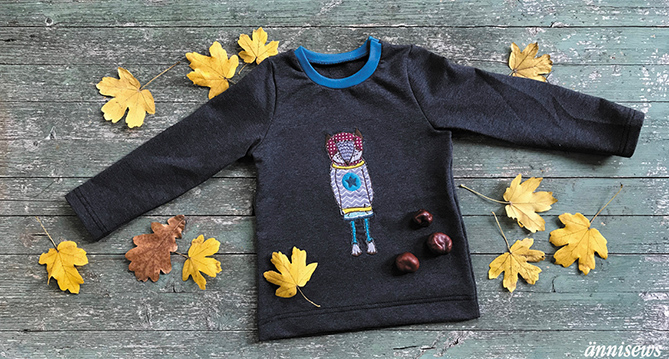 The one with embroidery and I wasn’t really planning it – I thought I would test it a bit and then it would be good again. But as is supposed to be the case with love at second glance, something more solid now seems to be developing.
The embroidery module of the B580 and I are becoming more and more familiar and I find myself choosing fabrics for their embroidery.
One of the few embroidery files for children that I like is Lila Lottas Lothar, which I have already embroidered on towels here. Of course, a Lothar on Kle should also be on the towel test >and without revealing too much: of course it didn’t stay at a Part. It may also be a bit addictive.
Since the thick winter jersey is completely uncomplicated from my floral embroidery experience compared to the fluffy towels or the irregular and very thin jersey, the embroidery also worked better. 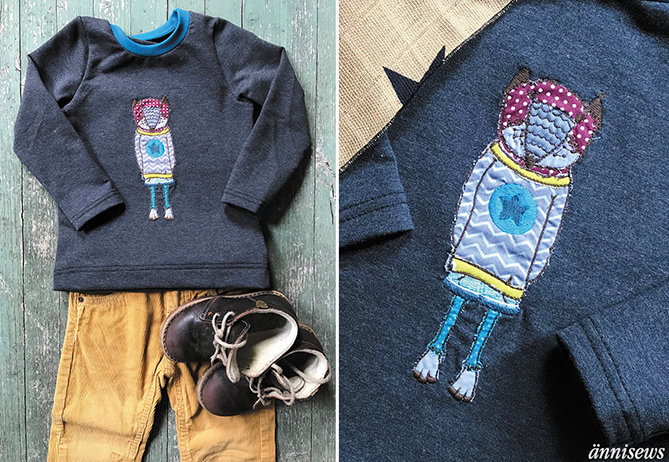 I used the glue stick fleece and the anti-glue needles again, gave the machine enough time and then things went well. What I really need is a fine pair of scissors to cut the fabric clean before embroidering the borders. I simply couldn’t get close enough to the seam with my all-purpose scissors or simply had too much worry of getting too close to the seam. But it’s Christmas soon.
Here I find it really funny that Lothar is dressed a little bit scruffy. His Kle >to-him-in-five years-then-throw away "-Box. Lied, I never had anything until the embroidery machine moved in from the Crate taken, but always filled up. And yes, I could probably embroider for 20 years in a row and there was still material. But I think he’s cute, so in his somewhat run-down look.
At some point I will also embroider a perfect Lothar made of fine fabrics to rehabilitate him. Until then, the good looks just like me at the weekend or in the home office. 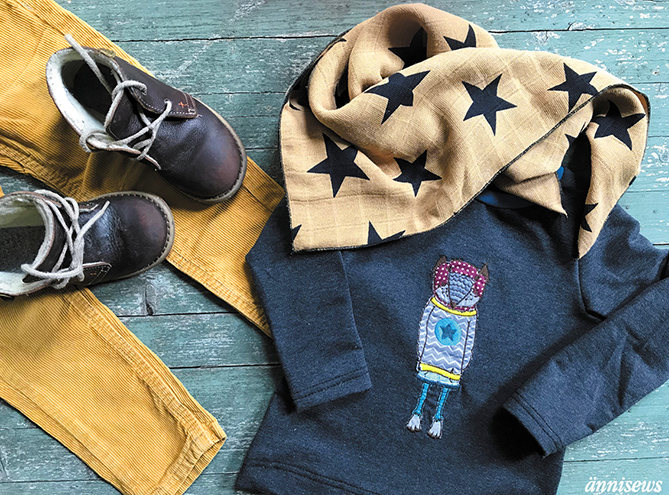 I recently announced that I would be taking children’s clothes without a minimann around the house more often in winter "Leisure stress" to keep something lower. For Lothar, I’m showing a flatlay for the first time "Kombikram".
I have the pants at a children’s club >and not perfectly cleaned. Sorry Only the cloth is also new and of course self-sewn. Here comes my newly discovered love "gerollsäumten" Triangular scarves come into play and so I sewed a double one for the minimann. To do this, do not cut the square apart and overcast it all around, but simply fold it diagonally and sew the short legs together. Apart from the fact that the cloth becomes thicker in winter, this is also a nice way to have no visible back on printed fabrics. And since such a children’s towel is of course smaller, 50 cm of fabric is enough to get two double or four towels with front and back at full width. 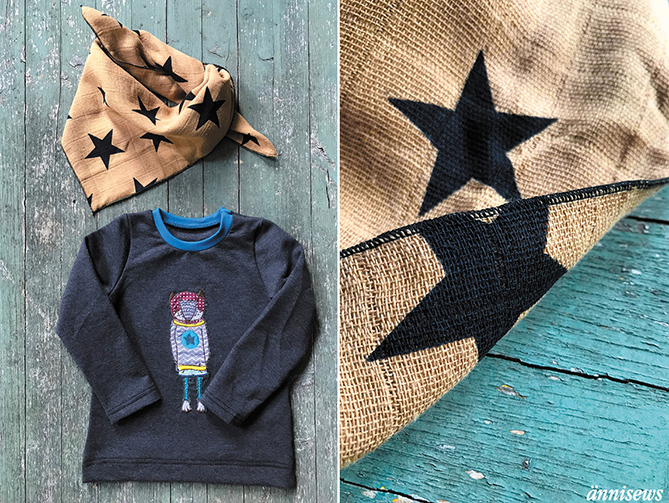 But I also have to warn: it’s best not to start with it, it’s totally fun, incredibly fast and you always need cloths. You become addicted almost immediately. Similar to embroidery. And with that I’ll say goodbye until tomorrow – there’s an embroidered part for me!

The Bernina B580 is made available to me by the Flach sewing world as part of a cooperation. You can take a closer look at the embroidery module for the B560, 570, 580 models here.