More than just a trendy district: The Northern Quarter in Manchester 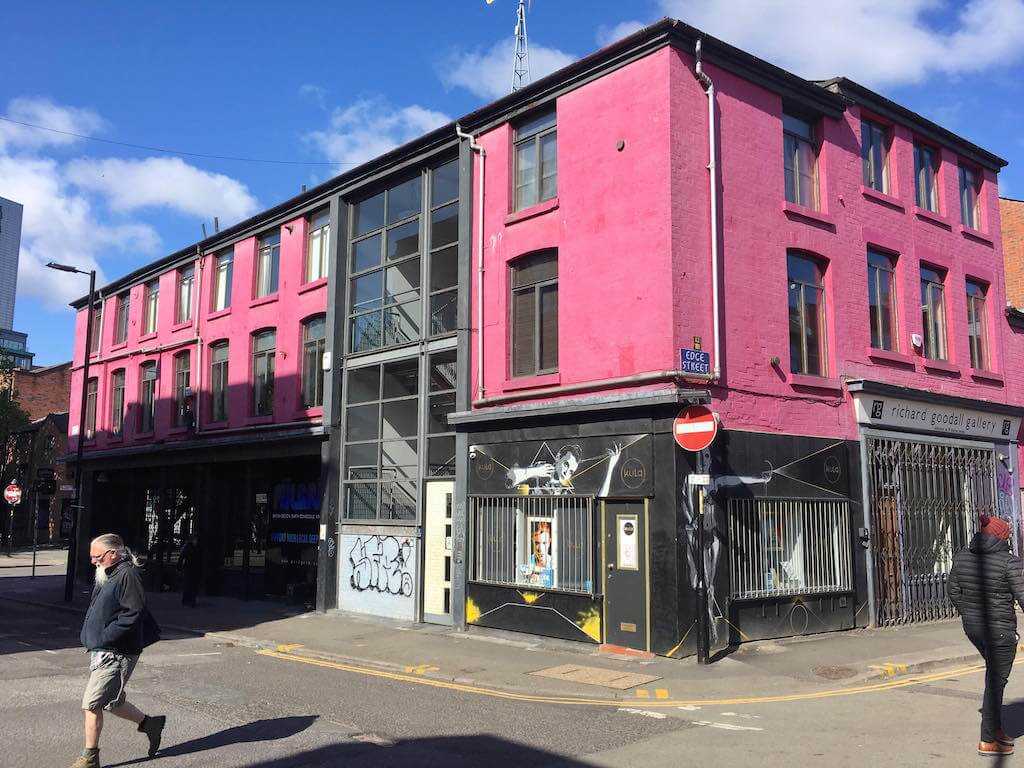 The Northern Quarter was defined and named as such in the 1990’s, and includes several streets where cotton spinning mills and textile factories were located at the time of the Industrial Revolution. Incidentally, the apparent contradiction between rich and poor already existed at that time: while Marx and Engels described entire streets and their buildings as “utterly horrible” and rundown, on the other hand there were shops and apartments for wealthier people. 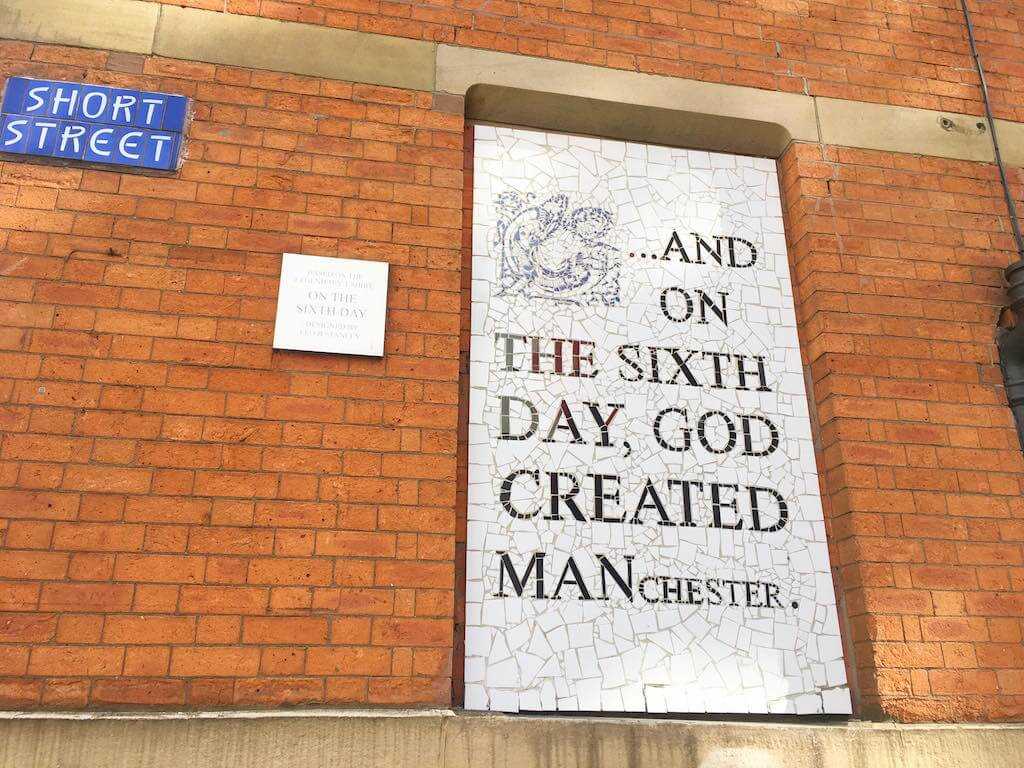 Trendy district in Manchester with a very special flair

The stamp of a mere Hipsterviertels You can not press the Northern Quarter today: of course, the trendy bars and restaurants have gained the upper hand, but you can also find old-established pubs and the rents have remained at least halfway affordable. I love the very special atmosphere in which people stand in line at the comic shop, smoke their cigarettes in small groups in front of the bar and in which you as a tourist or local can spend a good and always inspiring time.

Tea and Coffee in Manchester: The Best Cafes in the Northern Quarter 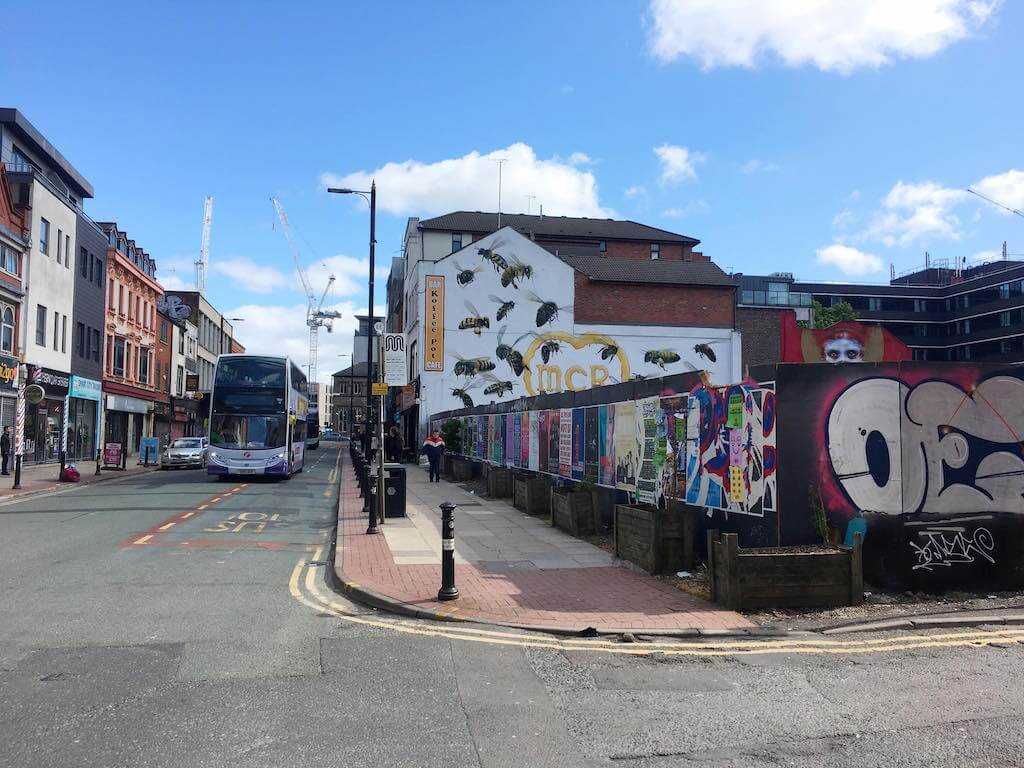 The Koffee Pot is an institution in Manchester’s Northern Quarter, and not just because of the indie band Elbow here especially like depended. Not a hipster cafe, but a typical “Greasy Spoon”, in which there are English breakfasts, sandwiches and of course coffee, and even today quite reasonable prices. Unfortunately, the gentrification was not spared the popular neighborhood café, so it had to give way five years ago from its original location on Stevenson Square. Fortunately, it has since held its old glory just a few meters away on Oldham Street. If you enter Manchester Full English Breakfast want to eat, then necessarily here in Koffee pot.

Breakfast, brunch, sandwiches, cakes: the Teacup Kitchen has already won prizes for his culinary magic, and rightly so. I go here as well as every visit to Manchester, because here for me there is clearly the best tea in Manchester. Granted, not very cheap – let’s go from 4.50 pounds per person, but the tea is loose, in selected quality and is served in the pot for multiple infusion. 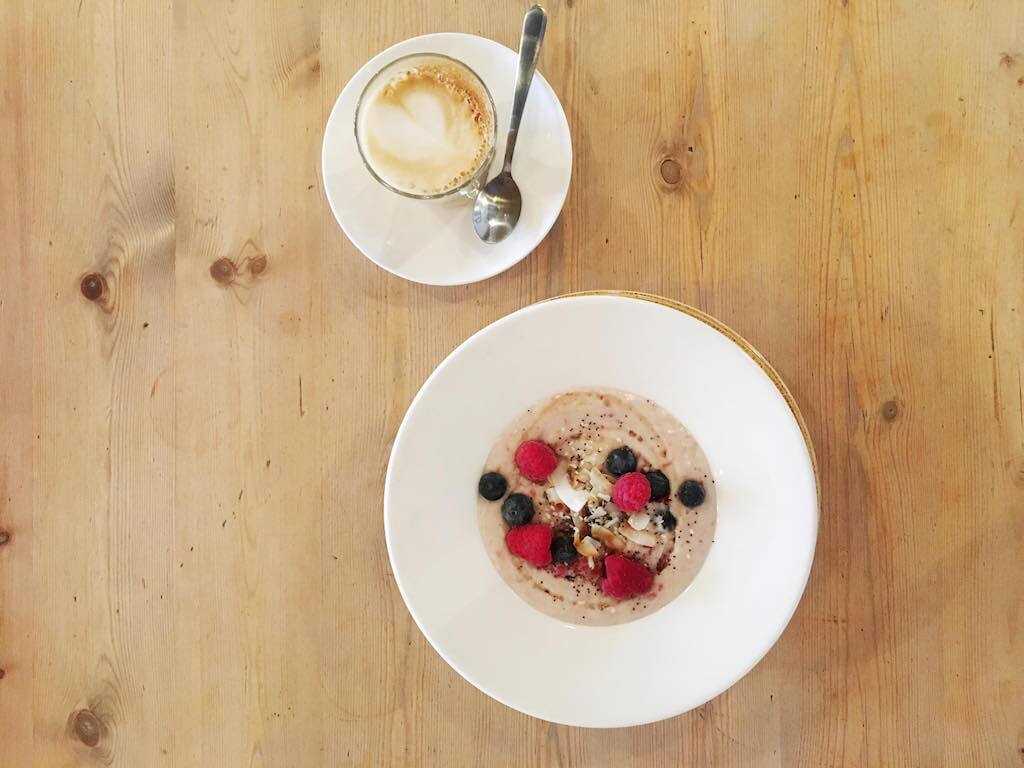 In Teacup Kitchen you get a very, very good porridge

The name is program: Sugar Junction is not necessarily something for people who eat sugar free. My favorite address for a tea time or cream tea. The pastry is just a dream and since it is served on antique flower dishes, it tastes again so good. Very nice: at a later hour will be here too Evening high tea served with vintage cocktails. If you want to go to the Sugar Junction in the evening, be sure to book a table in front of it. 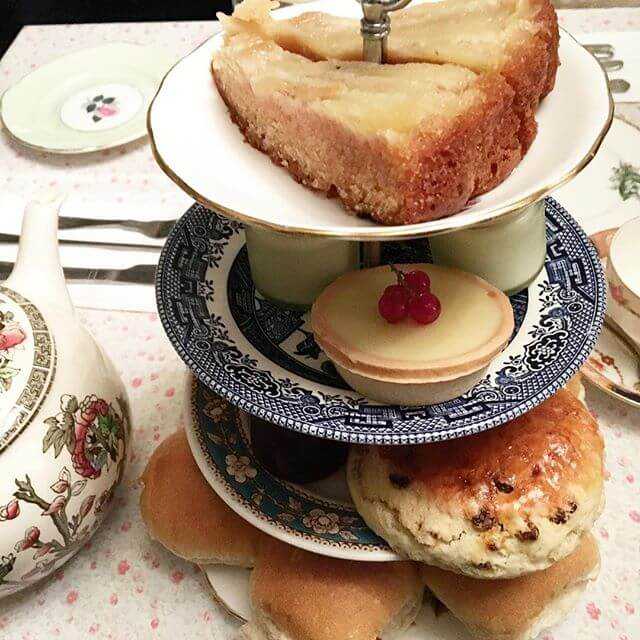 Sugar Junction: the name is program

What’s even hipper than coffee Manchester style? Icelandic coffee sure, of course. He’ll be in the small coffee shop Takk served and to my delight there is also a very decent porridge here. The Takk is a popular spot for working on a laptop, surrounded by like-minded people – in addition very friendly service (which also, after all, we are in the north of England) and a bright, warm atmosphere: it can only be even nicer in Iceland.

Eating in the Northern Quarter: the best restaurants

Eating out in Manchester? Of course, in the Northern Quarter. If you like it unpretentious yet delicious, Manchester’s Northern Quarter has plenty of restaurants to choose from. In the aforementioned cafes you usually get a light lunch, such as a typical English sandwich, a soup or a brunch.

But even if you are after something really heavy, then you have the agony of choice in the Northern Quarter. Whether you’re a juggler at burritos, Indian curries, Asian street food or real Neapolitan pizza, you’ll be guaranteed to satisfy your appetite. By the way: if you are in Eat vegan vegan If you want, you are also in the right place! Here is a selection of my favorite restaurants in the Northern Quarter. 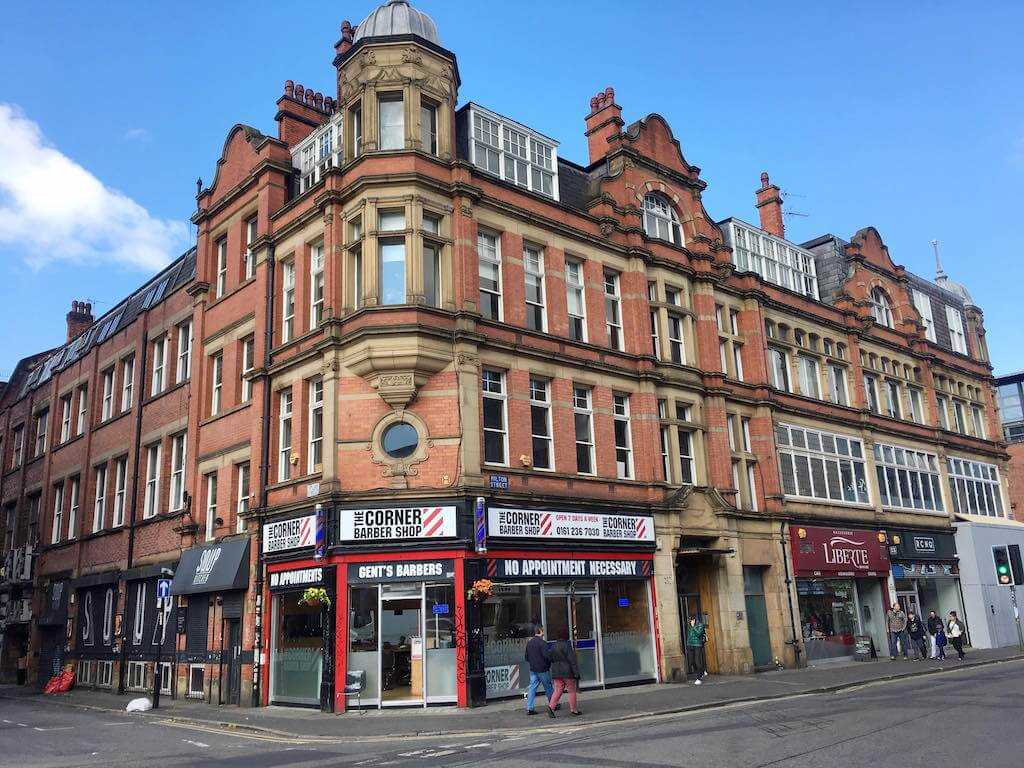 Right on Stevenson Square, this is Soup Kitchen an ideal address for a cheap and at the same time healthy and very good tasting lunch. The name is program: on the regularly changing menu are various soups and stews, but also sandwiches and salads. The food is asian-caribbean fusion food. My tip: no matter which dish you choose – order the incredibly delicious as an extra Halloumi Fries. A snack that is truly deserving of its permanent place on the menu.

In the evening, the kitchen stays cold – then the Sup Kitchen turns into a club with live music, DJs or comedy events.

A mini-room in a dark cellar – I was not so sure where it had moved me. Actually El Capo but a restaurant with really good mexican food. A kind of Mexican tapas bar, in which you put together food from various small dishes – above all, of course, tacos. For the big hunger there are also main courses such as burger, grilled or the “Gigante Burrito”. Especially great: vegans will be very happy with their own vegan menu. Then there are street food dishes that have been vegan, such as Mac’n’Cheese, tortillas, vegan burgers and dessert. Also known is the El Capo for its cocktail menu.

Shopping in the Northern Quarter 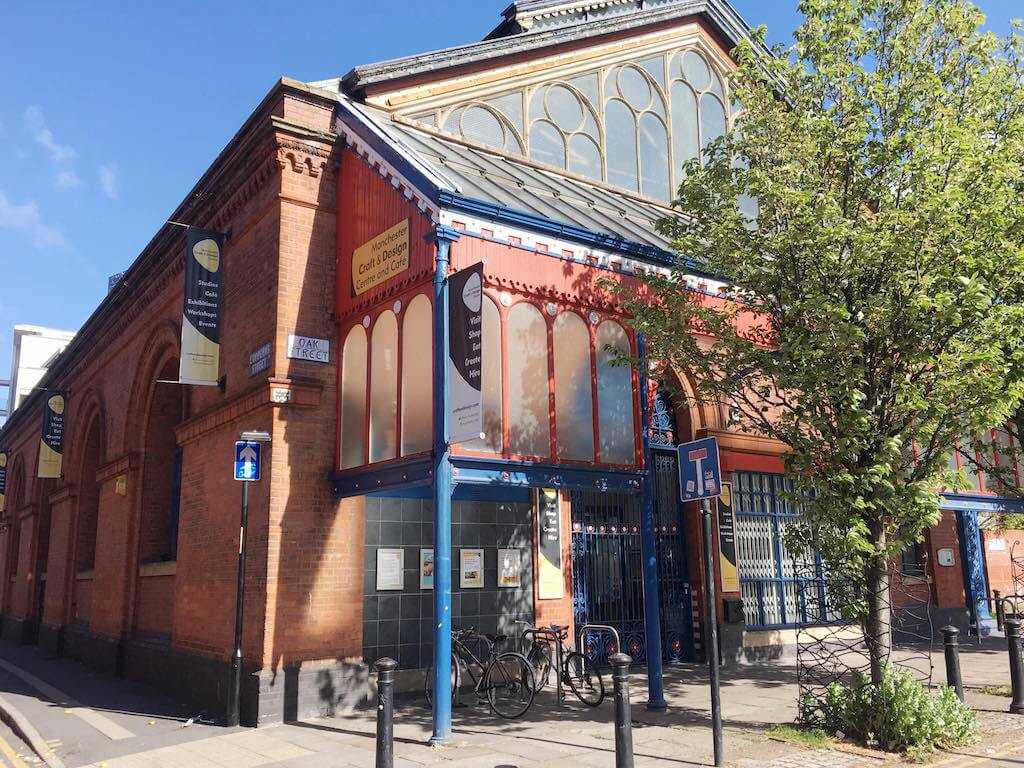 The Craft and Design Center in the Northern Quarter

An alternative neighborhood is not real unless it has at least one cool record shop. Piccadilly Records is one of those – with select vinyls, knowledgeable and passionate staff and probably the coolest soundtrack in the UK. Of course there are many records of famous Manchester bands like Oasis, The Smiths, Human League, Elbow, The Stones Roses and The Chemical Brothers.

The Craft and Design Center Located in a former Victorian fish market, artists and designers do not just sell their works here, they even practice their art here. On two floors, the creative minds of Manchester work and in the associated shops you will find guaranteed unckitige, unique Manchester souvenirs. From clothing to jewelery to home art: I hope you do not just travel with hand luggage! 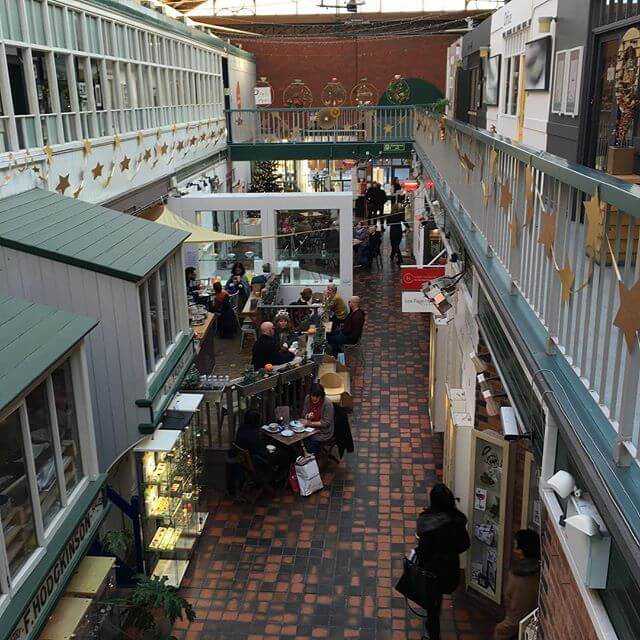 A real institution in the Northern Quarter: the covered clothing and all-purpose market Afflecks. Many small shop-in-shops, second-hand and vintage, clothes of young designers, odds and ends etc. etc. … in afflecks there is almost nothing that does not exist. The Affleck calls itself the “Emporium of Eclecticism” and there is definitely something to it. Be sure to stop by for your shopping spree in Manchester!
Affleck
52 Church St

Nightlife in Manchester: Cocktail Bars and Craft Beer in the Northern Quarter

So! Lots! Bars! From the stylish cocktail bar over the Tap Room with a variety of craft beer from the toothpick to the traditional English pub: in the Northern Quarter your thirst quenches. My selection of bars and pubs only covers a small part of the many options for having a drink in the Northern Quarter – the best you can do is simply drifting through the streets because if a bar or a pub is there every few meters. 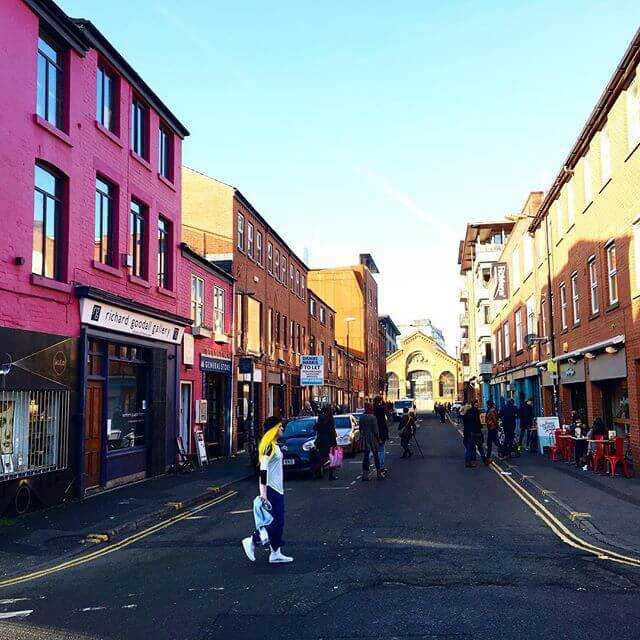 Looks like a “Pawn Shop”, but a pawnbroker, but is a really funky bar. A smorgasbord of aussortiteren radios, TVs, turntables, musical instruments and other odds and ends. From the outside you would probably walk past it, if you did not know that there is a bar here. At Dusk Til Pawn, there are extremely good cocktails, and not just those on the menu. Mixology is not just a term here, but the high art of preparing quality drinks and cocktails. My # 1 recommendation for a Gimlet in Manchester!

Manchester has a very large selection of craft beer bars, most of them in the Northern Quarter. The Beatnikz is one of those temples dedicated to artisan brews, and it’s just so cool here. This begins with the situation under the railway arches and does not stop with the selection of beer: 14 barrels, including specially brewed and guest beers. Anyone who would like to approve a bit more high-proof beer will also be happy in the Beatnikz Republic: they have specialized in bourbon, tequila, mezqual and gin.
Beatnikz Republic
35 Dale St.

You go to Walrus, if you want to drink cocktails in a relaxed atmosphere. The menu is small, in addition to drinks, there are also a few dishes with small appetizers and snacks, so you do not immediately hackedicht. Because, it is drunk neat, which is certainly also on offers such as “Bottomless beer” – “all you can drink” beer for 20 British pounds. There is always something going on in Walrus, be it a pub quiz, live music or open-mic events, where you can also play the stage yourself.

“Painfully cool,” my Manchester insider Josh would say. Industrial design, people who could also walk on the Dsquared catwalk and noble distillates: The Cane and Grain is very, very trendy and for a good reason. Two floors dedicated to the food and drink culture: in one part you get barbecue ribs with rum and bourbon, in the other noble cocktails. And there’s a tiki bar on top of that!

Yes, they still exist, the traditional English pubs in the Northern Quarter, though unfortunately this heritage is gradually dying out across the UK and being taken over by big chains. In the gentrified Northern Quarter, The Millstone is brave – a classic pub for people who just like to drink a good beer. If it was the one or the other sip more, then you may even dare to the microphone, because Tuesday is always karaoke in the Millstone. 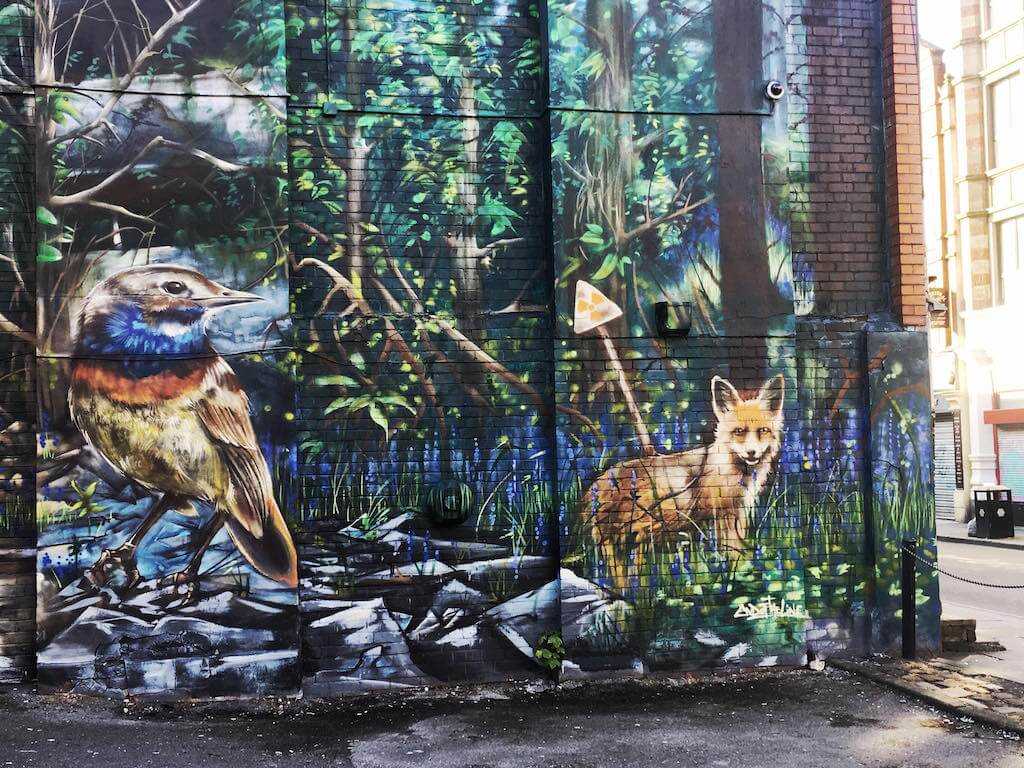 Actually an ad for a new Netflix series, but it’s not just beautiful?

Street Art in the Northern Quarter

The Northern Quarter is full of colorful street art. Best known is Stevenson Square, where Street Artis Outhouse regularly paints over its own works of art. It’s always exciting what he has conjured this time – he especially likes to paint actors and singers as in the past David Bowie and Anthony Hopkins – and most recently Arya Stark alias Maisie Williams (as of May 2019). Street Art meets you everywhere in the Northern Quarter – just walk the streets and let it surprise you! There’s a lot more street art to see in Manchester – read more about that in my blogpost Street Art in Manchester (online from mid-May 2019).

And if you want to know why a visit to Manchester is a good idea in particular, you will find out in my blog post about the Christmas season in Manchester.