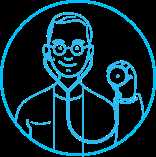 Ofloxacin is an antibiotic from the group of fluoroquinolones. It has a bactericidal effect and can therefore kill bacteria. Therefore, the antibiotic is prescribed for bacterial infections such as urinary or respiratory tract infections. Here you can find out everything you need to know about the use, effects and side effects of Ofloxacin.

This is how Ofloxacin works

Ofloxacin inhibits two vital enzymes of bacteria: topoisomerase II (gyrase) and topoisomerase IV. The genetic material of the bacteria, DNA, is a rope-shaped molecule that is strongly wound up and twisted in the cell nucleus for space reasons. In order to be able to read genetic information, the twisting of the DNA must be dissolved in places. Afterwards, the DNA strand has to twist again at this point. Bacteria need these enzymes for this breaking up and new twisting. However, ofloxacin inhibits these enzymes, so that the DNA cannot be read – the cell dies.

Absorption, degradation and excretion of ofloxacin

Ofloxacin is very well absorbed into the blood. When taken orally (via the mouth), the highest blood levels are reached after 30 to 60 minutes. Ofloxacin is hardly metabolized and is excreted mainly via the kidneys in the urine. About six hours after ingestion, half of the active substance has left the body again (half-life).

When is Ofloxacin used?

Ofloxacin helps with bacterial infections of the respiratory and urinary tract, bones, soft tissues and anterior eye segments as well as with bacterial pancreatitis. A prerequisite is that the respective pathogens react sensitively to ofloxacin.

How Ofloxacin is used

Ofloxacin is available in the form of tablets, eye drops and eye ointments. In the case of severe infections, the antibiotic can also be administered as an infusion because its effect occurs more quickly.

The dosage depends primarily on the type and severity of the disease, but also on individual factors such as the age of the patient and kidney function. For example, adults with uncomplicated urinary tract infections are usually prescribed a daily dose of 200 milligrams (mg) divided into two individual doses. It is usually taken over three days. In the case of kidney weakness, the doctor must reduce the dose. For more severe infections, the doctor prescribes a higher dose up to 400 milligrams of ofloxacin twice a day.

In the case of eye infections, one drop is usually given to the affected eye four times a day. When Ofloxacin is used as an eye ointment, patients usually have to apply a one centimetre long ointment strand to the corner of the eye three times a day. The maximum duration of the treatment is 14 days.

What are the side effects of Ofloxacin?

If you suffer from severe side effects or unspecified complaints, please consult a doctor immediately.

What should I bear in mind when using Ofloxacin?

Ofloxacin must not be used in the following cases:

interactions with other medicines

The antibiotic should not be taken together with any medicine or food containing aluminium, magnesium, calcium, iron or zinc as these may interfere with the absorption of of ofloxacin. The antibiotic should be taken at least two hours before and at the earliest three hours after such medications or foods.

If the antibiotic is taken together with medications that also lower the seizure threshold, the risk of seizures increases. Such medicines include theophylline (for asthma) and non-steroidal anti-inflammatory drugs (NSAIDs) such as acetylsalicylic acid, ibuprofen or diclofenac.

Ofloxacin can increase the effect of coumarins (anticoagulants) and glibenclamide (antidiabetic agent). Other drug interactions are also possible, for example with Probenecid (gout agent), cimetidine (for heartburn and stomach ulcers), furosemide (diuretic agent) and methotrexate (for cancer and autoimmune diseases).

Women should not use Ofloxacin during pregnancy and lactation. Instead, penicillins should be given for antibiotic therapy.

During treatment, patients should ensure that they have a sufficient supply of fluids, otherwise crystals may form in the urine (crystalluria).

If signs of tendinitis appear, treatment should be stopped immediately.