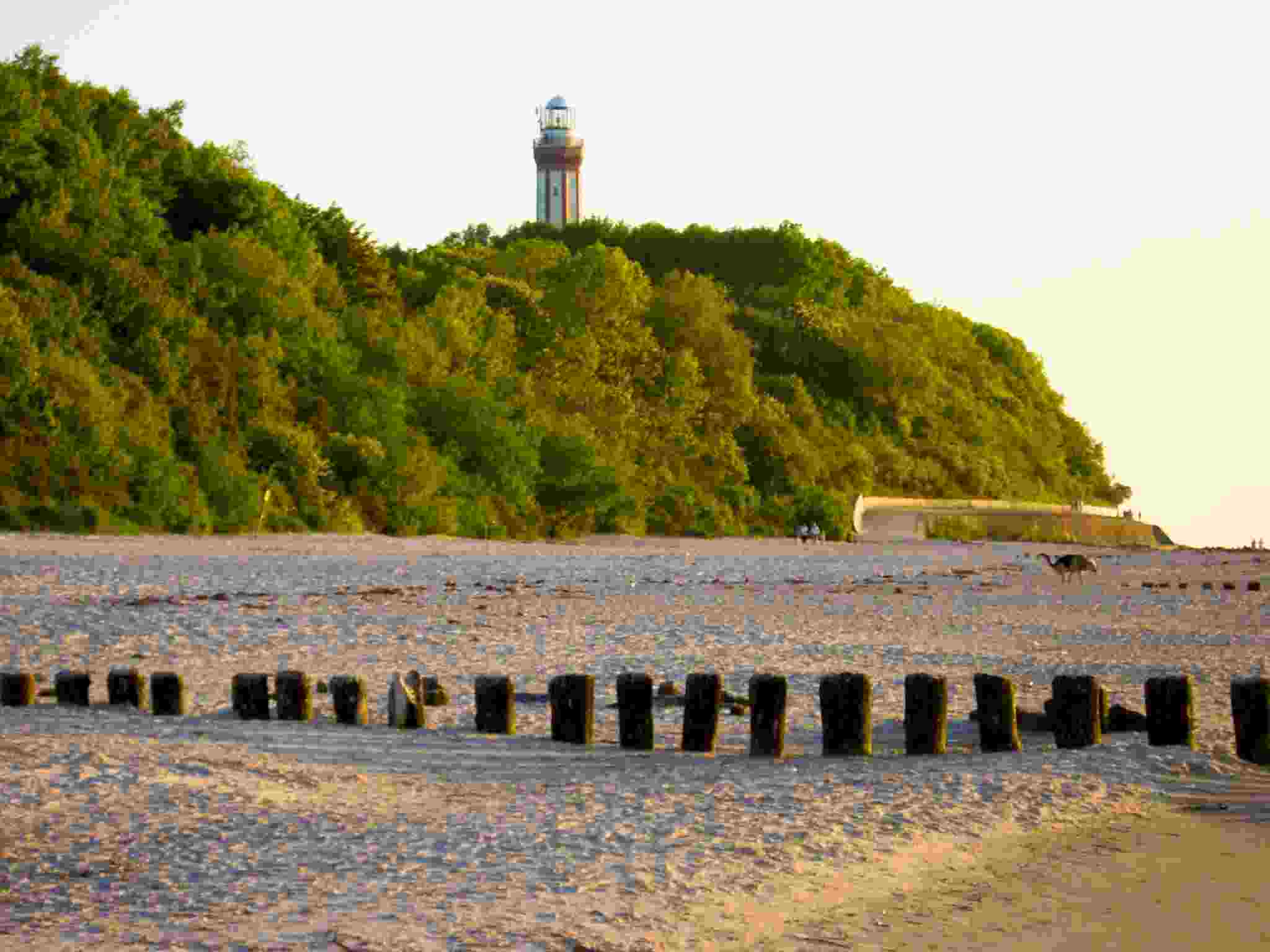 The seaside Niechorze on the Polish Baltic coast is located in the Polish administrative region West Pomeranian (Zachodniopomorskie), a still diverse natural varied moraine landscape, with many rivers, with many lakes and the Niechorzer lake Liwia Luza, with rivers, an interesting Baltic Sea coast between the cliffs and flat dunes changes and the tourists for miles golden yellow and flat sandy beaches offers, in West Pomerania almost 200km beaches. Here you will find large and small forest areas, fields and meadows, bogs and dune landscapes and a diverse cultural offer with many sightseeing destinations of the former German West Pomeranian region, where you will always encounter history and the present.

Do you dream of a nice beach vacation? Do you need rest and relaxation? Do you want to discover untouched landscapes by bike? Do you want to bring home unforgettable holiday impressions and interesting holiday photos? Then you should definitely visit our beach hotel on the Polish Baltic coast.

With the turning point in Poland at the end of the eighties one strives to build on the old seaside resort times again. Since then, many new hotels have emerged and old hotels have been renovated and renewed. Unfortunately, you have in many renewals German minimum standards such as the sound insulation not observed and it can happen to other hotels, they wake up in the morning from the showers and toilet flushes from the neighboring rooms. The Villa del Mar is almost the only Baltic Sea hotel in the region, which was built to German standards and even has soundproof windows. So if a stressed vacationer disturbs the actually pleasant noise of the sea, he can close the windows and has his perfect peace. Due to its location in a cul-de-sac that ends at the beach, there is no through traffic. As administrative headquarters, the municipality Rewal has been determined. The tourist center of the Baltic Sea holiday region has always been the old seaside resort Niechorze (Ostseebad Horst). The seaside resort has been running here since 1860 and it was the first town in the region to receive the recognition as a seaside resort, a quality seal that set the quality standards for a seaside resort even before the turn of the century. Rewal also received the status of a seaside resort.

The Baltic Sea resort Niechorze is qualitatively the main town of this Baltic Sea holiday region. The houses are all freshly renovated, only a few buildings that are not yet present in new splendor, the streets were re-fortified, the roads to the Baltic Sea usually as attractive pedestrian streets calmed pedestrian.

The community has greatly expanded the sports offer. The Baltic Sea vacationers can rent a football pitch, a sports hall with courts for indoor football, volleyball, basketball, badminton, tennis courts, etc. Almost everything is within a few minutes walk from the beach hotel Villa del Mar. For skaters, there is a skater place at the sports center with many handicaps. More information about sports and leisure in the seaside resort Niechorze can be found under the menu item "Sports & leisure"

During the high season and the adjacent time there is plenty of entertainment. The holiday in the Baltic Sea during the holidays is traditionally the main holiday in Poland, often even with the complete family including mother, father and also grandma and grandpa in the Baltic Sea holiday. Several fairgrounds with Karrussels and interesting rides are set up, many restaurants offer live music, there are several disco’s for the night owls, go-cart rentals, Quad rentals and quad tours, the beach hotel about 200 meters away through the whole place pulling main street with many restaurants, many small shops where everything the tourist could possibly need to buy and eat is offered.

Particularly popular among the Eastern holidaymakers here is the very cheap amber jewelry, which is here in fascinating workmanship and with the most diverse shades of color here. Amber is even here in Poland in many beach areas even commercially exploited. After the beach stay, the tourists stroll and stroll on the shopping street in the evening. The Villa del Mar is close, but is not affected by the hype of the season.

The Baltic Sea holiday as an additional holiday and as a wellness holiday, usually in the period from November to April has already become an integral part of the quality of life in Germany. While in the summer months, especially during the holidays, the Polish holidaymakers are in the majority, you will find many German tourists here in the fall to relax, hike, relax, ride a bike, walk or jog on the huge wide beach, fly kites or take her dog for a walk.

Much of the hotels and guesthouses are only open during the summer season and close in the winter. Shops for daily needs, textiles, etc. are also available in winter. But the shopping bustle of the summer is spared you at this time of year. Those who value shopping should go to Szczecin, Kołobrzeg or Koszalin in the winter, all destinations that can be reached quickly by car.

There are several riding stables in the holiday region, some of which are open all year. Anglers can buy day tickets for fishing at the post office, then your hobby is legal. A number of destinations are available to the tourist. The historic narrow-gauge railway runs only in the summer months. The landmark of Niechorze, the lighthouse built by Schinkel in 1860, is open all year round for viewing. The most beautiful view of the Baltic Sea, the green town of Niechorze, which conveys the impression of a park through the many trees from above, and the huge inland lake, a bird sanctuary behind it, you have of course from the viewing platform on the lighthouse.

A few meters from the lighthouse, the Lighthouse Miniatures Park Niechorze reopened in 2012. A surprisingly interesting Auflugsziel. With the circular route you have the form of the Polish Ostseeksüte from Gdansk to Świnoujście realized and all on the Polish Baltic coast existing lighthouses in the scale 1:10 faithfully reproduced and built. The tour is included in the entrance fee and is also conducted in German. You will be amazed at everything there is to say about this topic.

Lighthouses as dominant landmarks in the landscape have always enjoyed a special fascination. Although their importance for shipping in times of GPS has also decreased significantly, today they are still important and in an emergency even the last aid for navigation. Schinkel had built the well-known lighthouse on Rügen in 1827, a beautiful brick tower which unfortunately was replaced by a concrete tower as a new building and is now only to be used as a monument. Based on his experience Schinkel was commissioned with the planning and construction of the lighthouse in the former seaside resort Hort (now Polish: Niecorze). The realization took place only in 1864, long after Schinkel’s death. The lighthouse was completed in 1866 after only 3 years of construction. Unlike the tower on Rügen the lighthouse is not alone here but is part of a complex of buildings with a beautiful architecture.

A brick building with arched windows, colored shutters in front of the windows, a majestic entrance area with a bow crowned, large windows with 20 fields, dominantly perched on a hill and visible from afar. The lower 20m are a square brick building, then it goes into an octagonal tower, nicely decorated with red bricks in the corners and yellow brick on the sides to the observation deck in about 37m above the then the dome of the lighthouse located. The total height is 45m from the terrain or 63m from the sea level. The building complex originally housed 4 apartments for the lighthouse keeper families and barn. 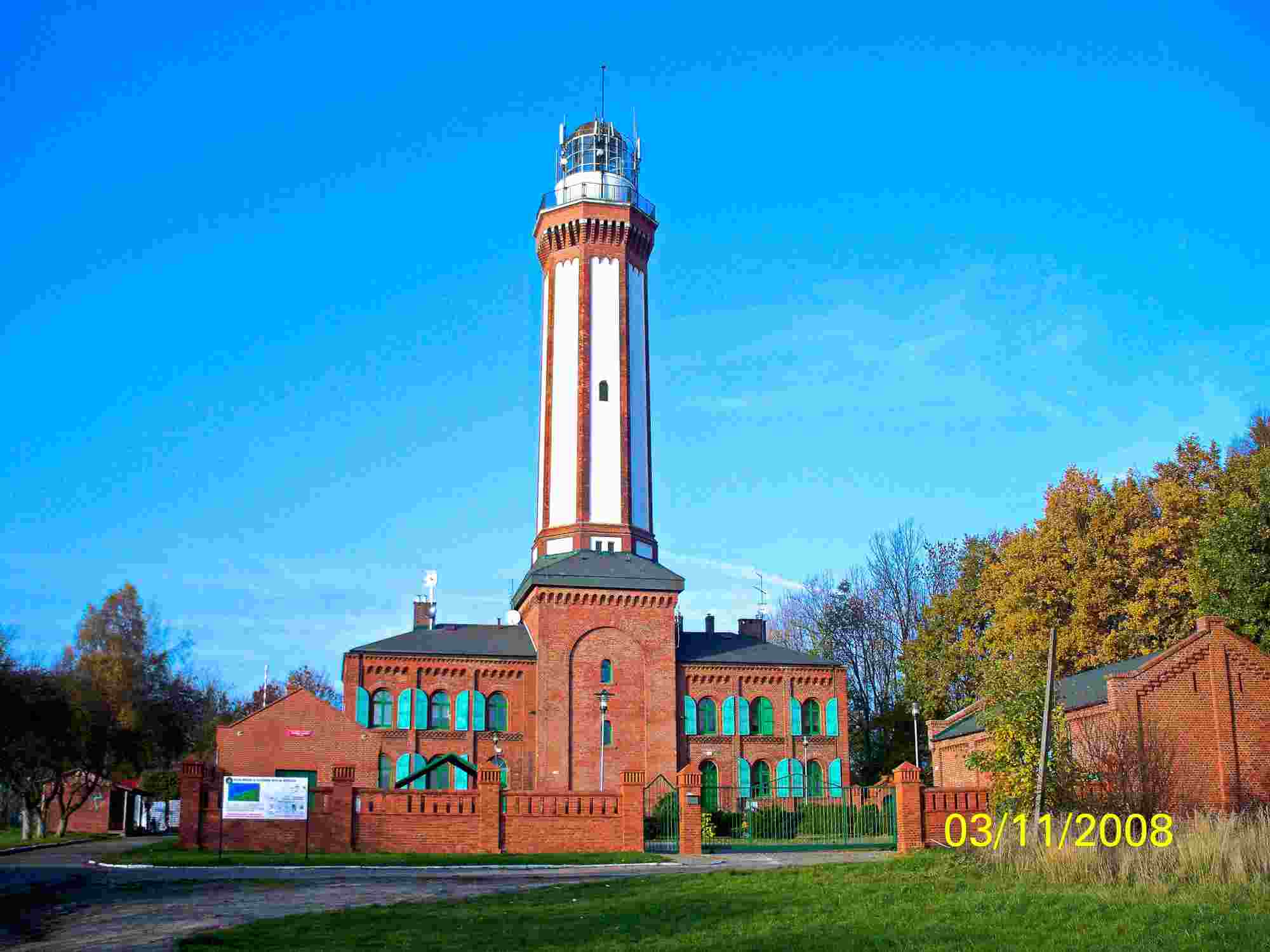 From the beach you walk once about 90 steps up to the foot of the lighthouse, unless you start at the back with the car. Then you climb in the tower inside a spiral staircase with over 200 steps and then reached the platform with a wonderful view of the Baltic Sea, the place Niechorze and the lake lying behind Liwia Luza, a nature reserve and in Poland known bird sanctuary with some rare species of birds. 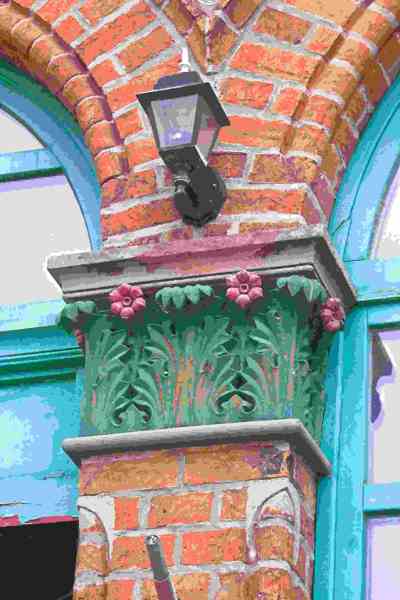 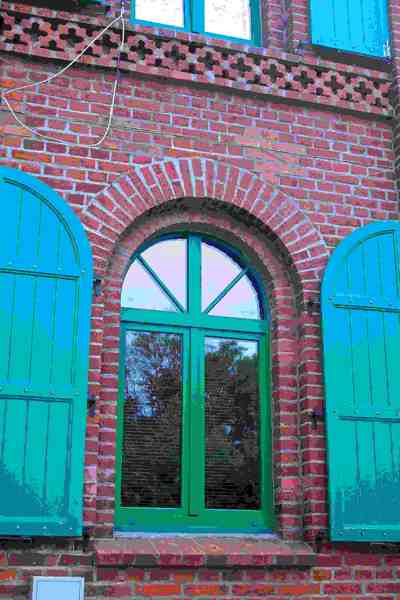 During World War II, the spire was unfortunately destroyed by an artillery shell. During the reconstruction, the bright brick segments in the tower were replaced by plaster and an electric light source with a swivel optics from Sweden was replaced. 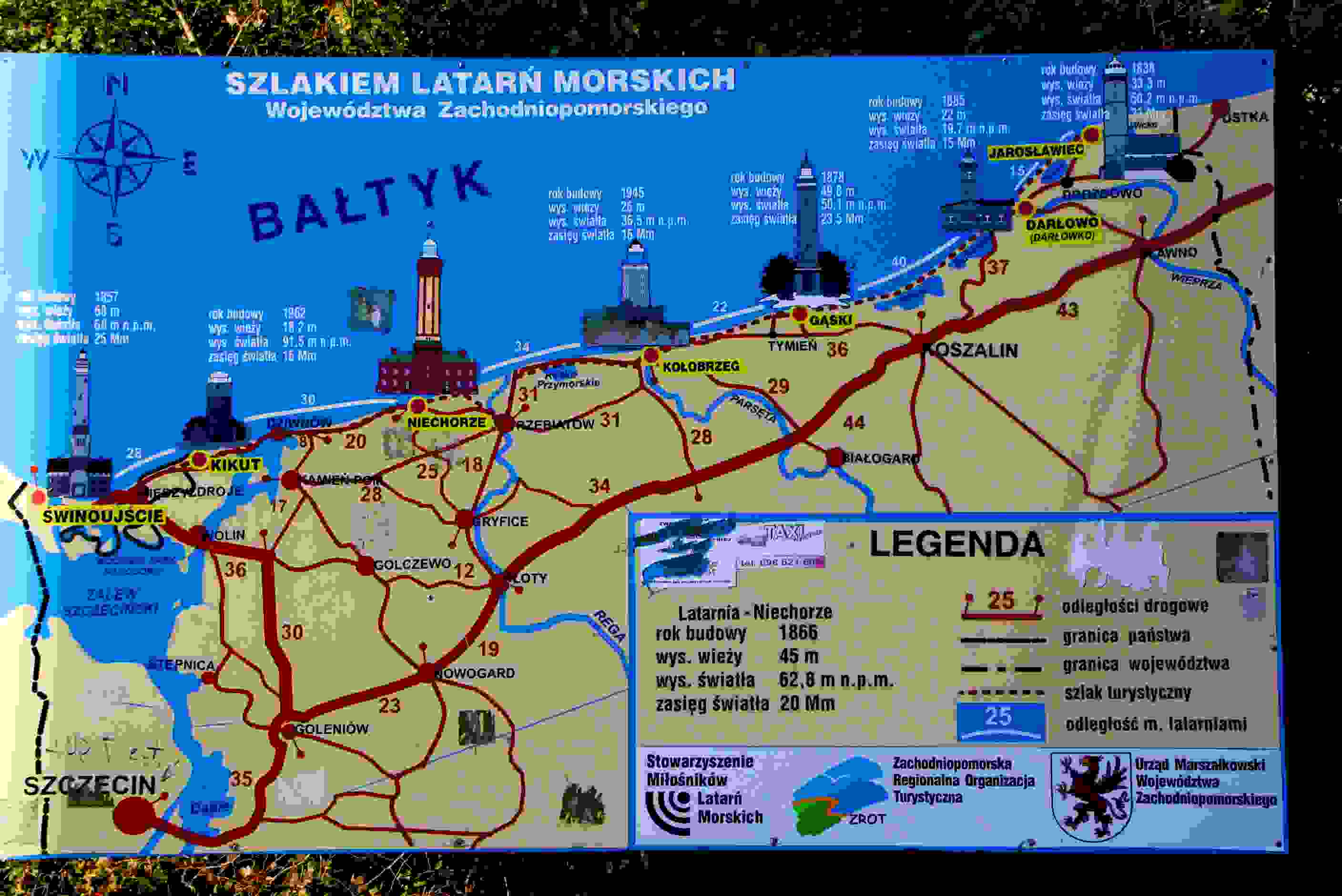 The lighthouse with the building complex is now a listed building and is still largely in the original, only the old inventory house has been demolished in the meantime because of dilapidated. The building complex has been renovated and refurbished in accordance with the preservation order, as well as lighting technology has improved over the years and the 1000-watt bulb is now electronically controlled and operates around the clock.

The lighthouse can be visited and climbed daily for a small fee and in any weather a popular and definitely worthwhile destination. 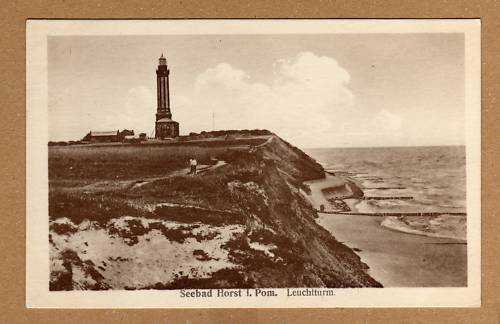 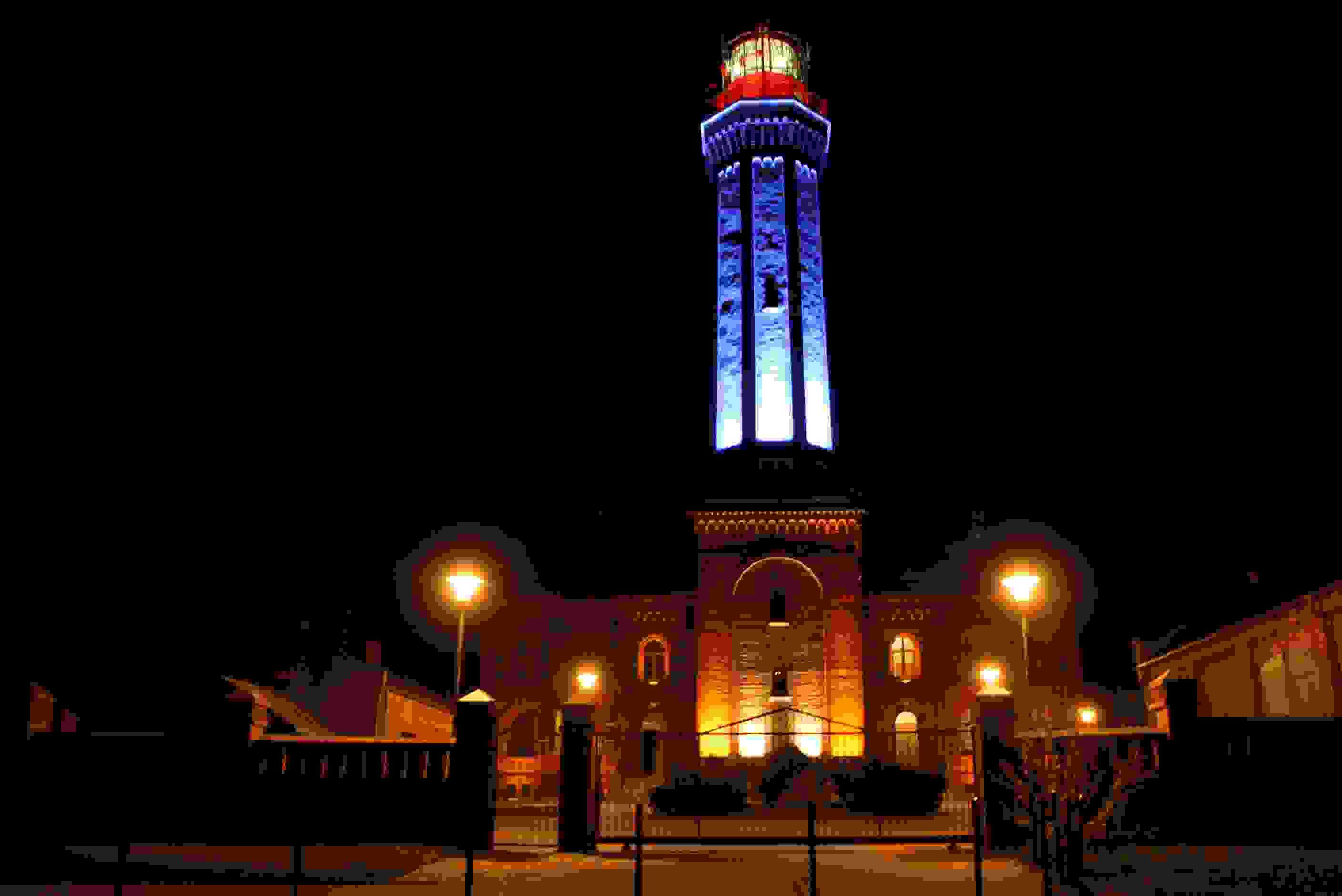