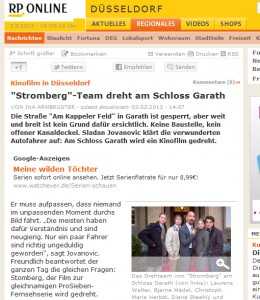 Düsseldorf is becoming more and more known worldwide. Not only that Christoph Waltz as Dr. King Schultz in “Django Unchained” (two Oscars) relentlessly points to the Altbier metropolis with the outrageous Grinse-D logo *): No, now the country’s much more famous Stromberg – aka Christoph Maria Herbst – is also shooting at Schloss Garath in Berlin Dusseldorf.

RP Online was at the press conference, which turned out to be a short photo shoot after endless waiting, accompanied by arrogant slogans of the film crew waiting. 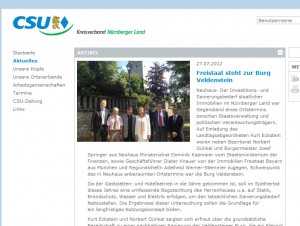 Parties and castles: That’s one thing. With the high symbolic value of old walls you can do great politics. Photos of grinning MPs who emphasize the importance of historic sites and celebrate the transfer of mini-amounts of taxpayers are what fill the Gazettes. As soon as the photographers have left, the thoroughbred politician is already on the way to the next image maintenance appointment and forgetting the preservation of the castle.

Especially embarrassing is the theater that drives the CSU on the state-Bavarian castles so (campaign with the Nuremberg Castle, flag fight). Already the announcement of the examination of the installation of a power connection is the party-owned court reporting a long article on the beneficial activities of the “political leaders” worth the obligatory group photo.

Also with the FDP one knows, how one can profile oneself with symbolic financial expenditure as castle friend. The liberal Saxon state parliament member Holger Zastrow managed to be honored in the Saxon newspaper for having turned on the new nocturnal castle lighting at Burg Mildenstein.

Background: The party-based association “FDP hilft”, whose chairman is Zastrow, donated the project proud 660 euros (in Saxony, by the way, elected next year). Zastrow’s performance is likely to annoy the Saxon state CDU, who likes to meet in the Knights‘ Hall of the castle. 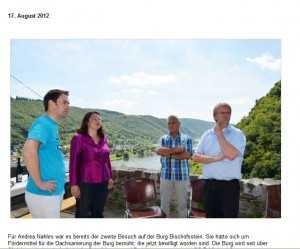 SPD General Secretary Andrea Nahles shows how to do effective press work with castles in the background. On her “summer trip 2012” she visited two castles: Bischofstein (Mosel) and Olbrück.

In front of photographers and a running camera, the members of the Bundestag were happy to see that the funds they required for the renovation of the roof of Burg Bischofstein now flow. The Friends of Burg Olbrück gave the high guest a fine drop. Report and photos on the page of Andrea Nahles. It will be interesting to see if Ms. Nahles will also be involved in the upcoming, further elaborate redevelopment measures.

Conclusion: Engagegment, even by federal politicians is in itself a good thing, but may not be purely a public relations meeting and exhaust in the castle photo and the letter to the competent Minister. It is important to have continuous support and backing for the owners, operators and patrons of the historic buildings. These are the people who, with far too little money, are involved in the endless work of preserving the burgerbe – and to ensure that even CSU ministers can hold swanky receptions on “their” castles.

Addendum: At the castle Veldenstein, to their rehabilitation, the state government in July 2012 “basically known” had (see photo above), it came on the night of May 28 to a heavy rock fall. Parts of the castle wall and 300 tons of scree crashed onto a street. A house was damaged.

A crisp cold winter with permafrost and lots of snow at least ensures that the Münsterland moated castles look even more picturesque than they already are. A particularly large and nevertheless elegant plant is the baroque lock Lembeck south of Dorsten – today as hotel used.
Wasserschloss Lembeck: Built on artificial islands read on → 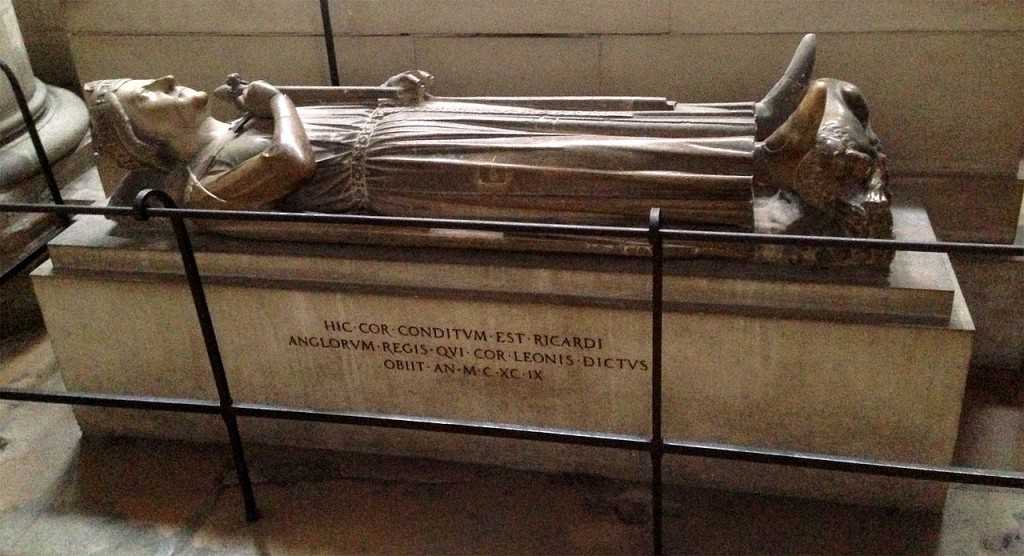 The tomb with the heart of Richard the Lionheart in the Cathedral of Rouen. Photo (and picture above): public domain

What stories can tell the heart of Richard the Lionheart? The French medical archeo-anthropologist Philippe Charlier has tried to find out with forensic methods.

He had begged for two grams of dust from a lead box discovered in 1838 during excavations at Rouen Cathedral. It bears the inscription “HIC IACET COR RICARDI REGIS ANGLORUM” (“Here rests the heart of Richard, King of England”). 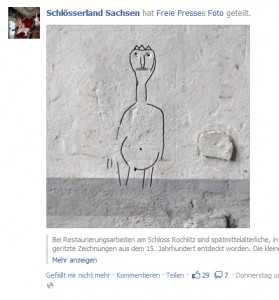 In the restoration of the (rather impressive) Saxon castle Rochlitz wall drawings have been discovered. In the second half of the 15th century, castle dwellers carved “comics” into the plaster of three window niches. This reports the Central German Broadcasting.

You can see, among other things, the rather awkward drawing of a (naked) king, a mounted man and cannons. In the castle at that time princes of the Wettin were instructed.

The MDR is one – maybe after the experience with Prince Harry? – convinced that only young blue-blooded animals are eligible for graffiti. In this case, the carvings would be a historical mischief unique in Germany, which can certainly be best marketed as a visitor magnet.
Graffiti of little princes discovered at Rochlitz Castle read on →