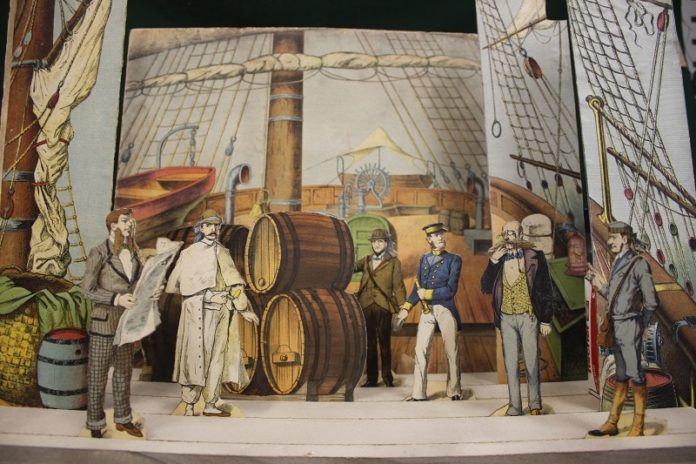 Grimma. The Grimma District Museum is showing an exhibition until 30 July with the Title "Paper Theater – Great Theater in Miniature".

You can see a large number of small paper theater stages that were built around 1900. A second focus of the exhibition is on fairy tales. Various classic fairy tales by the Brothers Grimm and Hans Christian Andersen are shown. There is a task for the children: they should find out which fairy tales are distributed around the house. Each child receives a questionnaire. If all fairy tales have been recognized correctly, the questionnaire will be entered into a raffle. The winners can expect a fairytale gift on July 31 at 3 p.m. The Augsburg engraver Martin Engelbrecht (1684-1756) is considered one of the inventors of the paper theater. He initially produced large-format peep-box pictures for professional peep-show walkers. Then he came up with the idea of ​​reducing the size of the pictures and offering them to private customers. These miniature "dioramas" offered in cardboard folders are considered the earliest examples of paper theater. The paper theater was created in parallel to the development of the theater as a miniature version of the large stage and was produced and published as a cutting sheet in Germany and England from 1810 at the same time. In the Biedermeier era, these cut-out sheets were part of the so-called “picture sheet culture”. They could not be missing in any middle-class household.

In the second half of the 19th century, the paper theater changed to a children’s theater, in which fairy tales were increasingly performed. It was played in the family setting in front of maybe 10 people in the living room. In the finished size, the theater is about the size of a medium-sized television. All parts such as stage front (proscenium), curtain and side scenes, the figures and set pieces first had to be cut out, then folded according to specifications and erected with guide rods or holders. Back then, candles often took on this not entirely safe task as lighting. The picture sheets were mainly bought and used by middle classes to build, entertain and educate the children. Paper theater was a symbol and a medium of identification for the enthusiasm for theater of the citizens, the the Opera and drama discovered for themselves in the first half of the 19th century. After 1918, also with the development of Radio and television, paper theater was increasingly forgotten as a communication tool for education. However, it has recently been experiencing a renaissance.