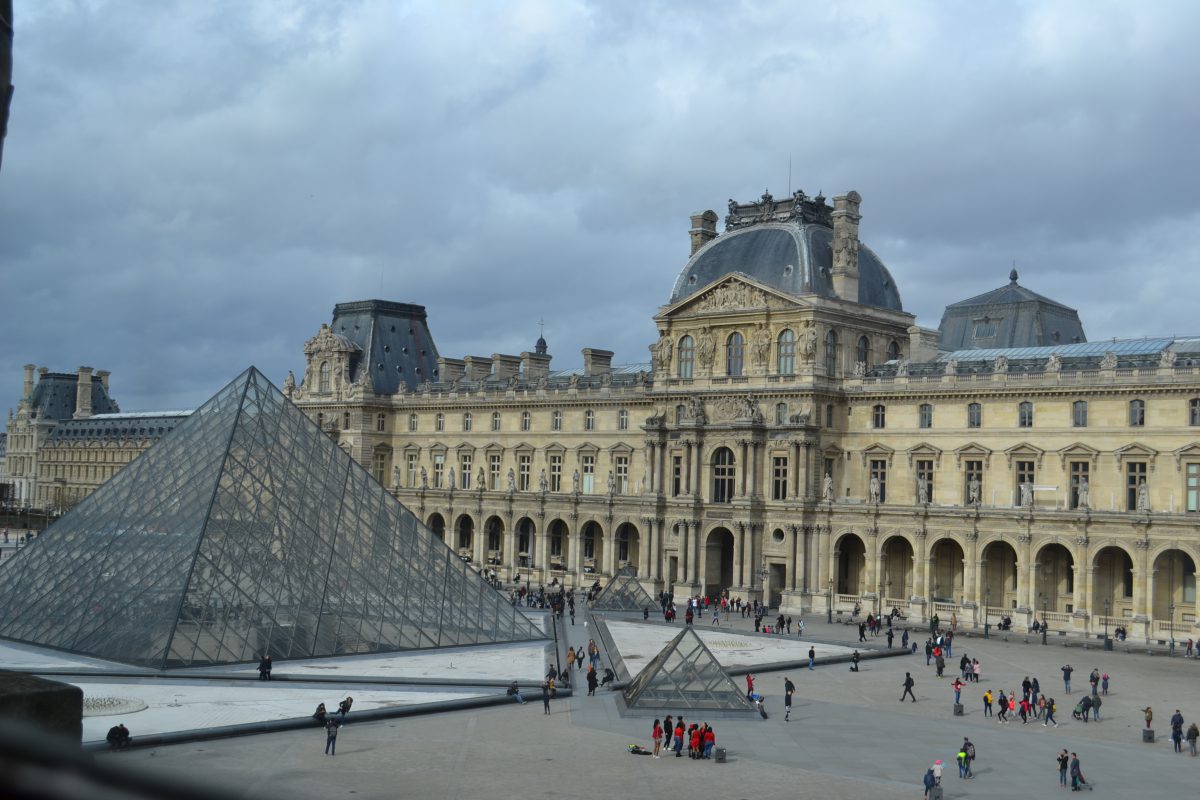 Advertising without order * We have just returned from Paris. After not being in Paris for almost 20 years, I went straight to the French metropolis with all three children. Before I was not so enthusiastic and happy, but the children were even more so. They love big cities, the bigger the better, London is always a highlight. So now we went to Paris for 4 nights. Friday the big ones had a carnival party at school and the little one and I were at the Gruffalo in the Odysseum.

Flying is not optimal and expensive for the environment, traveling by train was not flexible enough in terms of time and also not cheap. Therefore, the most sensible option for us was the arrival by car, there are five of us, so the car is fully occupied and we are not bound by time. 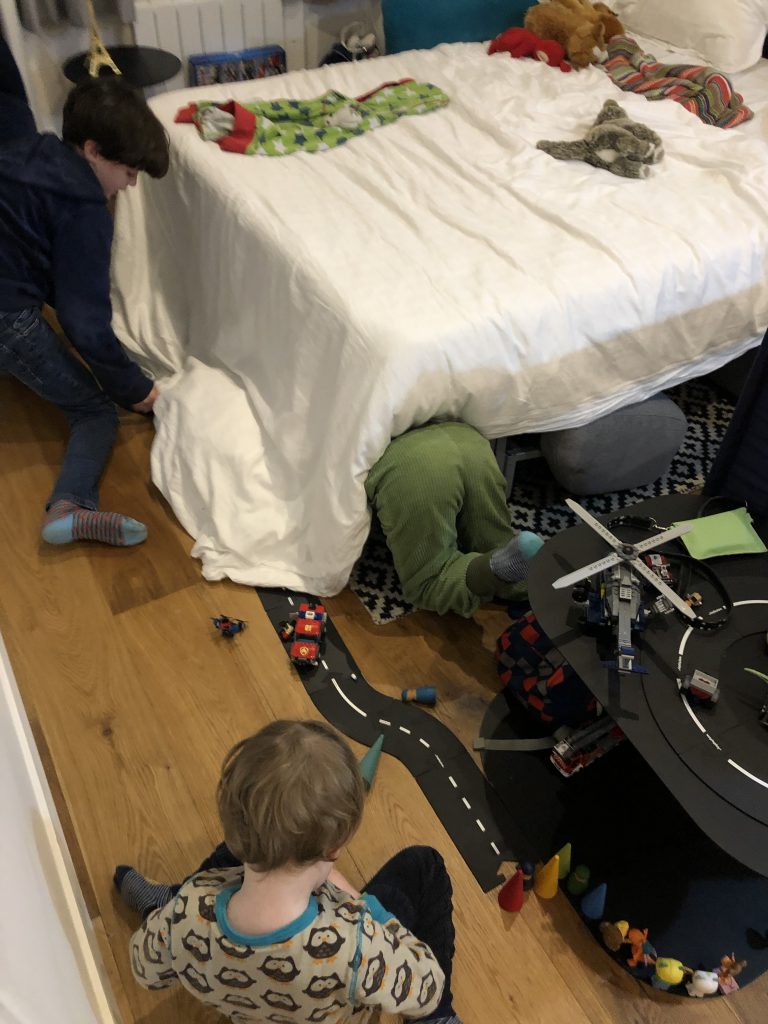 This is how it looks in the apartment, the children are playing. Since we were traveling by car, luggage was not a problem

Find accommodation with children in Paris

Hotels often automatically disappear as a family with three children. There are not always family rooms, often only up to two children, in normal rooms you can place a maximum of one extra bed. Our children are too young to have their own room, we have it all in one small, Made us a familiar hotel (with a baby monitor for the big ones) and it gets incredibly expensive right away. For us, airbnb is now mostly the best option for city trips. The house in London was also booked through it. 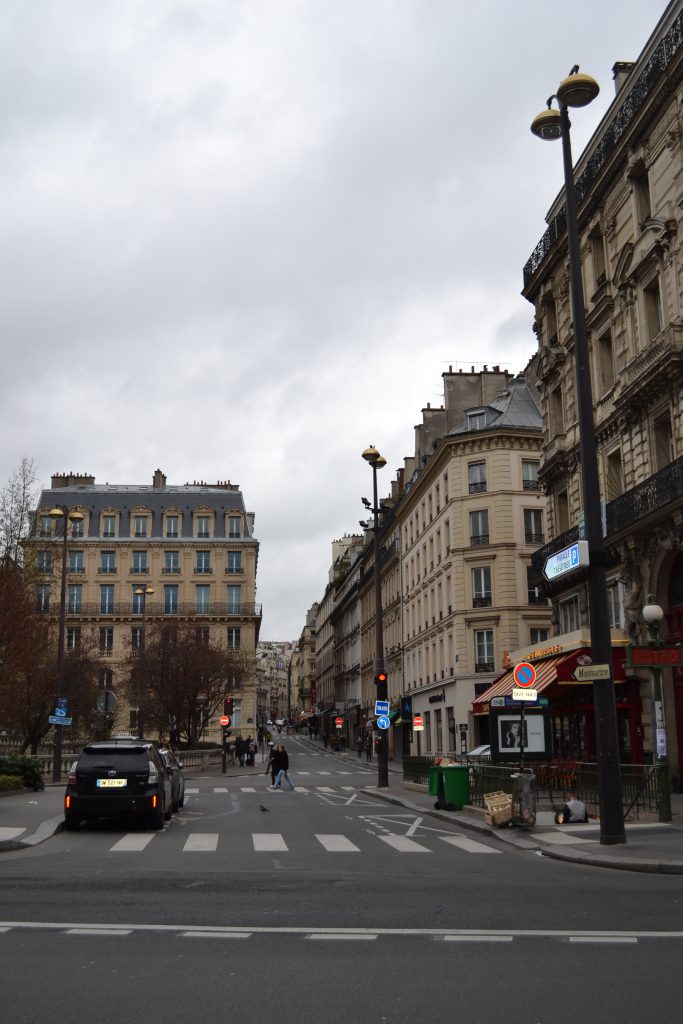 View of Rue Blanche in Paris – we lived in the corner

We always make sure that we book with superhosts or professionals, and we read the reviews and conditions carefully. My nightmare would be to get a cancellation 2 days before arrival and find a new suitable accommodation with children. The location is also important to us, central, but reasonably quiet and everything important within walking distance. The five of us usually take apartments with one bedroom and a sofa bed in the living room. It usually remains affordable and we parents have at least a small retreat. 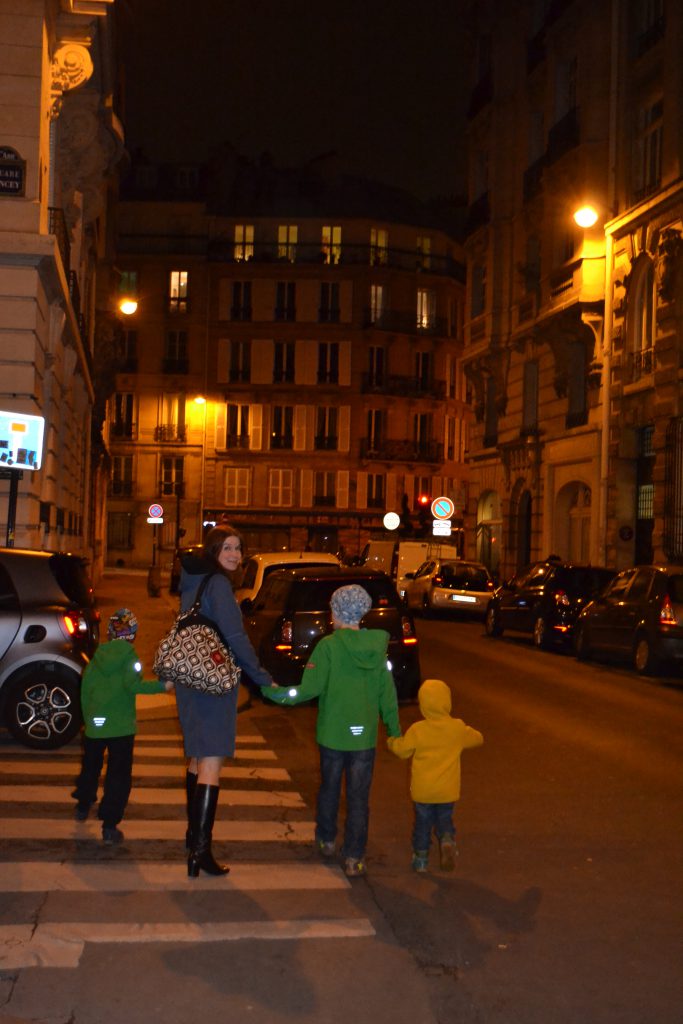 Fortunately, we only had a few traffic jams, although it was Friday. We quickly checked in at the apartment, which was on the 1st floor and really looked as described. Then we went to Wagamama, which was around the corner. It was brand new and accordingly it was a fun experience. There were no udon noodles, nor was my husband’s wish, but the menu was anyway smaller than in England. In addition a few small mistakes, but they are new and at least it tasted good as usual. Because of the chaos, there was more ice cream than there was for the children’s menu after it was too little. Then we all went to bed, we were exhausted from the day.

We look at Paris

We started the day relaxed on Saturday. Of course there was pain au chocolait and croissants for the children for breakfast. Since the apartment had a Nespresso machine, I was also taken care of. Then we started walking and just strolled through Paris. On the Montmatre up to Sacre Coeur, from where the middle man drove with Papa Funiculaire, the great experience for him. The big one preferred to finally choose a chain of lights for his room. 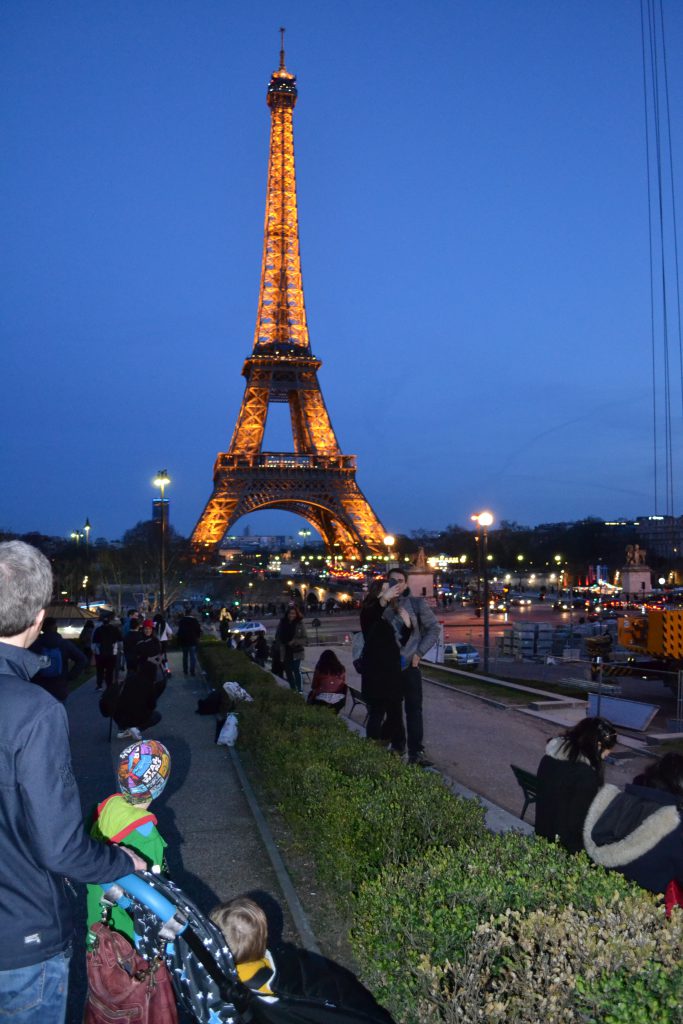 The children are impressed by the Eiffel Tower

Sundays in the Louvre with children

We also started Sunday quite calmly. I had looked before, tickets for the Louvre could be booked online, but I was only shown an option with printouts. So we were lucky to walk to the Louvre. 20 years ago, hell was going on at the Louvre itself at 8:30 a.m. and at 9:00 p.m. the queue was halfway there. We were there shortly before 1, stood in line in the really manageable queue (my estimate was 15 minutes), to be picked up directly by a friendly staff, like everyone with a buggy or wheelchair, and we were able to go through security immediately. The ticket purchase (adults € 15, children under 18 free) went really quickly thanks to the machines and good organization. We were pleasantly surprised. When we got the plan, the children got “Louvre Passports”, small passports with stickers and pages, where they could stick in all the artworks they saw. Therefore, first conclusion: the Louvre is extremely child-friendly!

We started with “poor Lisa” (quote from the middle one). In the meantime, the Mona Lisa has its own huge hall, of course, where crowds of people were queuing, but you still came close to the factory. Next we are through the picture galleries, which the children found more exciting than expected. The grown-ups really stopped and looked at pictures. However, they found the Egyptian area and various artifacts even more exciting. The Venus de Milo was named “it is broken! It has no head! Why does nobody fix it ?? ”commented. In the end, we were in the basement, where you walk through the former moat and learn about the history of the Louvre as a building, which the children naturally found totally cool. In total we were in the Louvre for 2.5 hours. I think the time with children is really good. 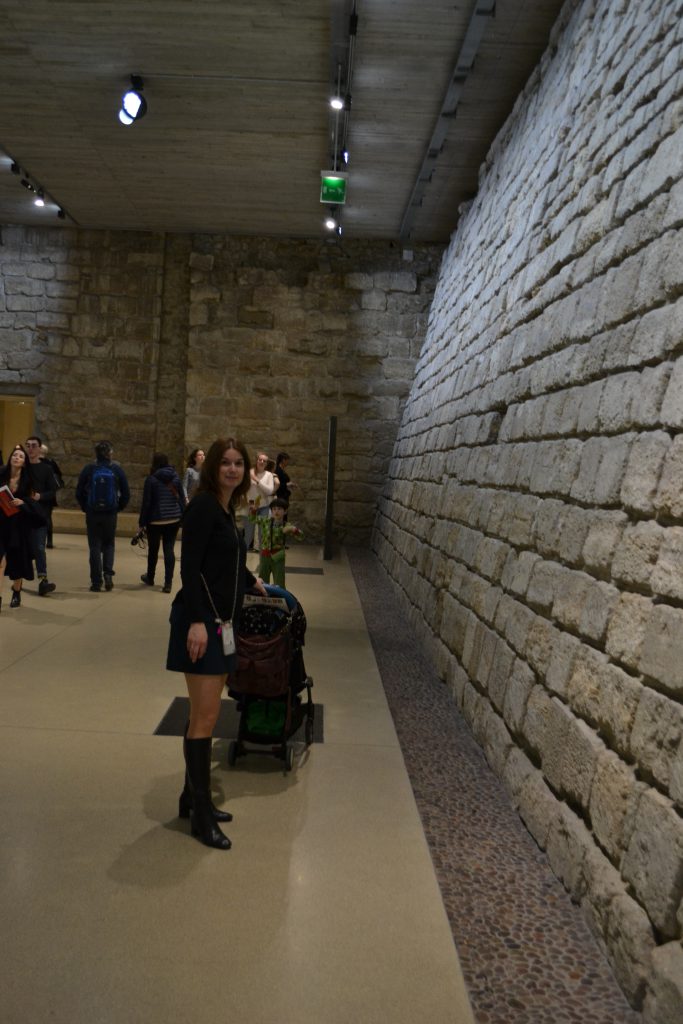 Under the Louvre – old walls

We stroll through Paris

After the Louvre, we listened to street musicians in a square, a big big band that spread a great atmosphere. From there we are then through the Marais district, where the children were happy about the rainbow flag at the zebra crossing past the Center Pompidou. There would be free admission on the 1st Sunday of the month, the queue was long enough so we didn’t go in. Instead, we preferred eating tartlets and waffles at Pomme de Pain. In Les Halles we accidentally discovered the Lego store and, from the boys’ perspective, ticked off Notre Dame. Then it rained heavily again and we went back to the apartment. In the evening, dad took a short evening walk with the two little ones.

On Mondays we got off in the morning and actually wanted to go to the Champs Elysees. Unfortunately it was raining really hard, ice cold and windy. So we were only up to Place de la Concorde and would rather go back to the apartment with slowly soaking jackets. Since the dad was working, the boys were not really motivated to leave the house and played happily. In general, playtime is important for our children, no matter where you are. So you played, I read and watched the April weather outside in March. In the early evening they let themselves go for a very short lap and we got a tiny little sun. 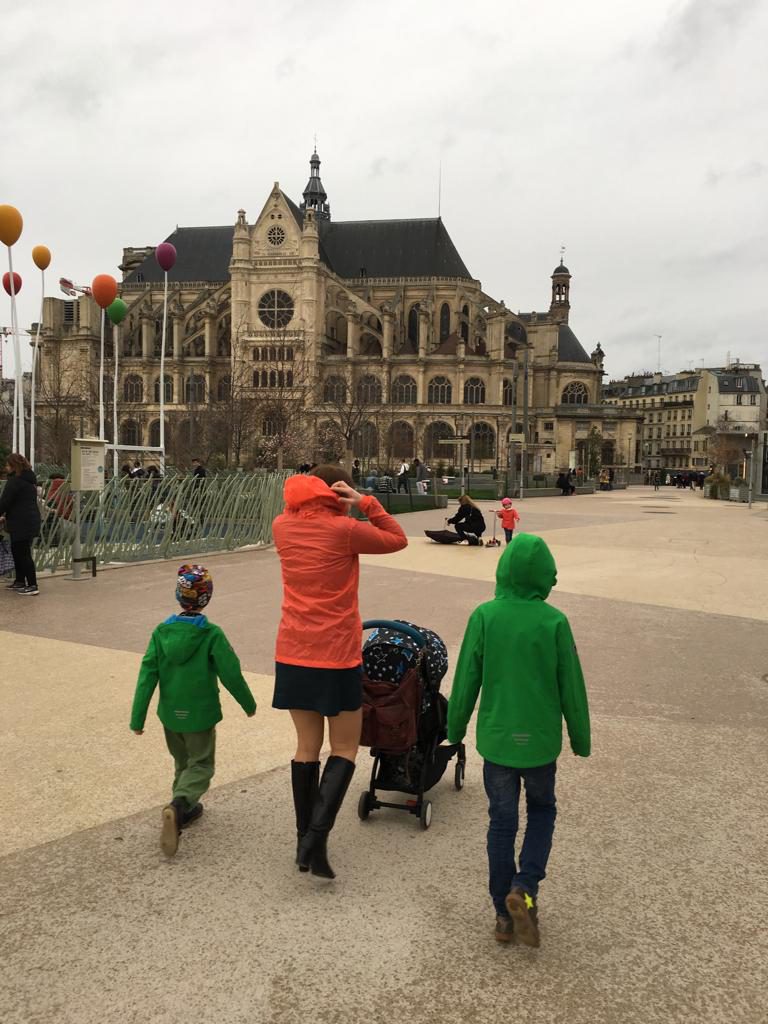 The rain catches up with us, rainy day in Paris

I described Tuesday in detail at #wmdedgt, we had to be out of the apartment at 11, so I packed in the morning and the boys had to pack their things first and then were allowed to watch TV. After we were at Papa’s hotel for a short while, we went again, a new attempt to go to the Champs Elysees (is it really "the" or "the"?). It started to rain again, at first only moderately, then more. But we saw the triumphal arch, at least from a distance, I didn’t want to carry the buggy wet the stairs. Then we walked down the Champs Elysees through the various passages. When the rain got too heavy, I made my children very happy: we went to McDonald’s and everyone got a happy meal. After that, it was almost time to go back to the Hotel des Papas and drive home from there. 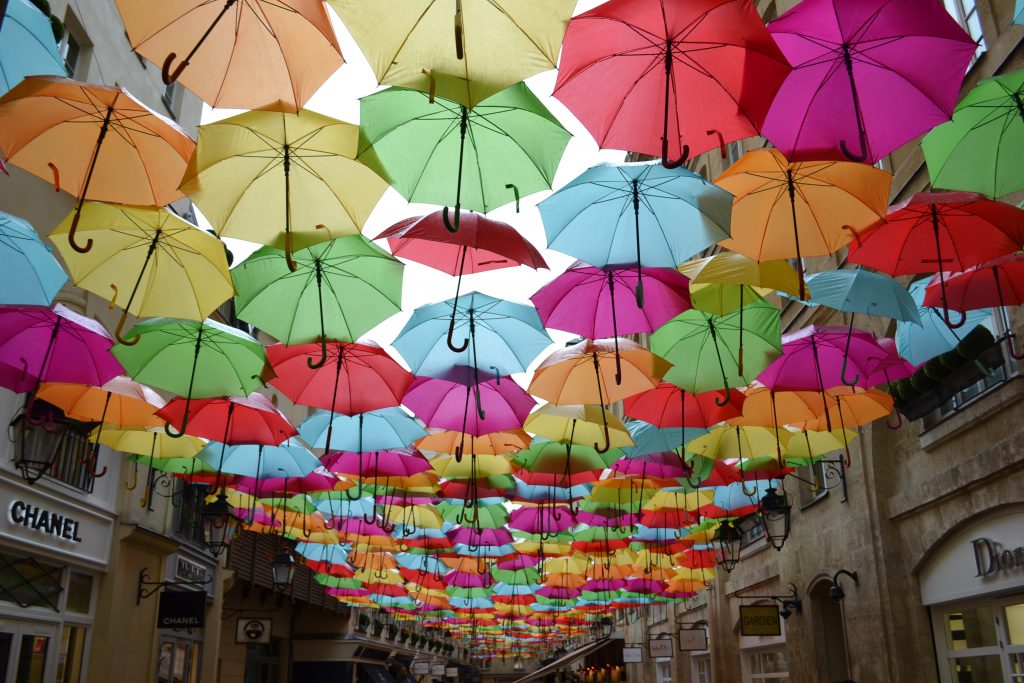 Umbrellas in Paris (I admit that in Liverpool I found cooler)

The children were thrilled, they found Paris wonderful and exciting. However, they are also big city kids and the bustle and size do not cause them any problems. They found the high police force particularly great. We only drove the Metro once, I found it extremely tight and difficult with the children, as nobody took any account. 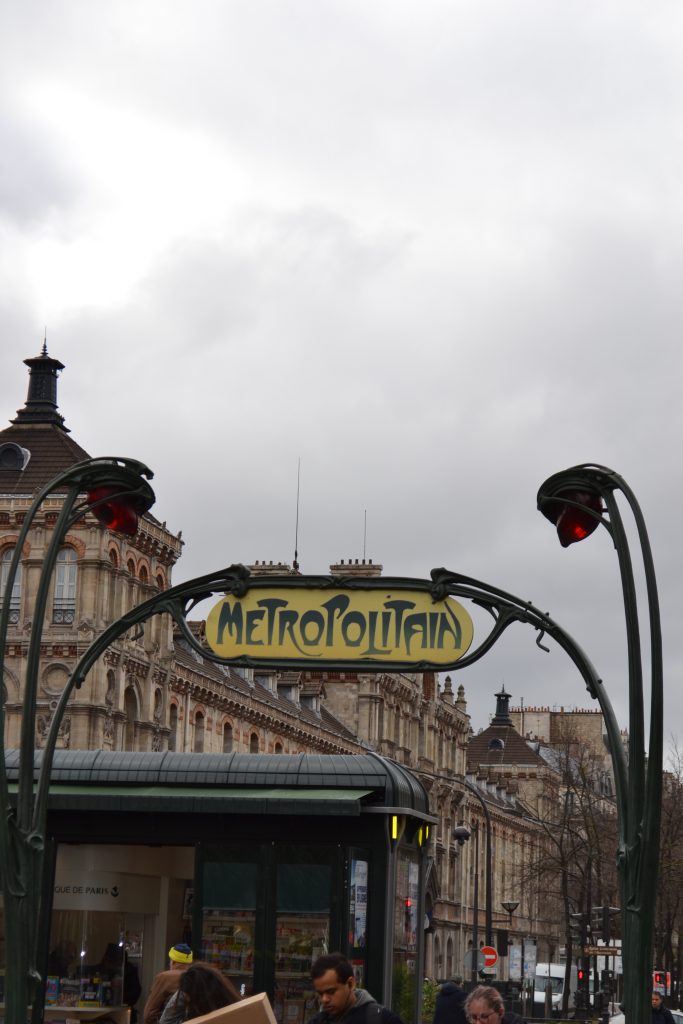 I’m not a fan of France, either own Inadequacy, I speak very little French. You couldn’t get along with English at all. Also, maybe nobody speaks French very slowly and easily to me, so that I have the chance to understand something. Even at Wagamama, the young staff didn’t speak English and the menu was only available in French. It has happened to me a few times that things have appeared on bills that I have not bought or received, for example a shopping bag for € 4 or the associated dessert for the children at Happy Meal. In the supermarket I had a shopping bag myself and pulled it out of my pocket in front of the cashier, it was probably not an accident. Therefore, I would recommend a trip, especially with children, if at least one family member speaks French well. My experience in other countries is that you make an effort to communicate, people use their three chunks of German for the children and at least you can get by with English. Of course it’s not representative, it’s my subjective experience. Overall, I found Paris clear more beautiful than in my memory and we had an exciting time and saw a lot. 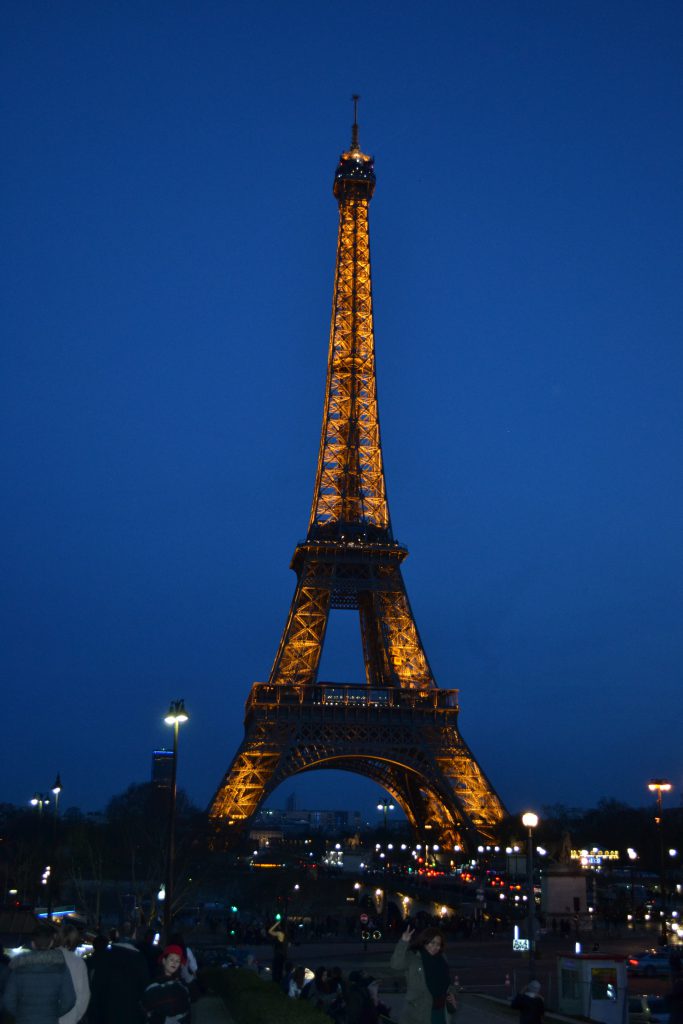 Light on the Eiffel Tower

And, fitting to my blog topic: we had the Babyzen Yoyo + with us and found in Paris that 60% of all buggies in downtown Paris are Babyzen Yoyos.

* unpaid, unsolicited advertising. Brands are called descriptive. We are not sponsored or influenced and paid for the trip ourselves.