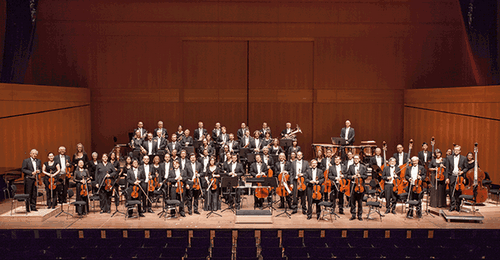 When the Reutlinger Bürgerschaft founded a professional orchestra after the Second World War in 1945, the birth of today’s Württembergische Philharmonie Reutlingen (WPR) struck. The orchestra has long since developed into an internationally active symphony orchestra with members from approximately fifteen nations, which performs well over a hundred concerts a year and performs the duties of a national orchestra.

The two focal points – regional anchoring on the one hand and internationality and cosmopolitanism on the other – are key features of the WPR. At the same time, it has a deep impact on society in its region, by explicitly addressing different audiences with its multi-facetted, lively program design and continually reaching new target groups through its innovative spirit. This comes from the awareness of social relevance of culture and the commitment to the city of Reutlingen and the state of Baden Württemberg. In their guest performances on the international stage represented in a nearly three-week tour of Japan in 2006 officially the cultural life of the state. But also in all other tours and guest concerts, whether in the Vienna Musikverein, the Berlin and Cologne Philharmonic, the Concertgebouw Amsterdam, the Konzerthaus Dortmund, the KKL Lucerne and the Tonhalle Zurich, whether in festival houses such as Salzburg and Baden-Baden or at festivals such in Ravello, Warsaw (Beethoven Festival), Toblach (Gustav Mahler Music Weeks) or Besançon (Festival international de musique), the WPR sees itself as an ambassador.

She works with artists such as Lang Lang or Thomas Hampson, with Sabine Meyer and Frank Peter Zimmermann, Christoph Poppen and Fazil Say as well as with artists of other genres and music styles: After the WPR in Reutlingen has its own, successful for decades Kaleidoskop series For programs beyond the great classical-romantic orchestral literature, she is regularly asked to perform with artists from such areas as jazz (James Morrison, Till Brönner, Klaus Doldinger, Ute Lemper or China Moses), world music (Natasha Atlas, Yasmin Levy , Burhan Öcal) or musical, Latin, hip-hop, chanson (Dominique Horwitz) or pop (Max Mutzke) to make music. In special FOKUS events, the orchestra has dedicated itself to the music of Turkey (2013) and the Jewish Diaspora (2016).

The WPR is intensively involved with the next generation of listeners and reaches more than 8,000 young listeners in Reutlingen with more than 25 children’s and family concerts each year. She was awarded the “Innovative Orchestra 2019” prize by the Deutsche Orchester Foundation for her nationwide unique interactive streaming streaming format NETZ-WERK-ORCHESTER, which she uses to reach people in rural areas.

In 2009, she received the first BKM Federal Prize for Cultural Education for a project with mentally disabled artists. The WPR 2014 was again nominated for the same prize, then for a music theater project with 250 participating (including composing) children in the context of the 62nd German Mozart Festival (2013). In 2015, the WPR also organized a concert series for people with dementia in cooperation with the Alzheimer’s Society. In 2016/17, FUGATO was followed by an intercultural music theater project with refugees, which was continued in 2018 due to the great response.

Numerous CD and radio recordings document the artistic work of the WPR, including world premiere recordings. Chief conductor of the WPR is since the season 2017/18, the American conductor Fawzi Haimor.

It has long since developed into an internationally acclaimed symphony orchestra with members representing around 15 different nationalities. Performing well over a hundred concerts per year, the WPR serves as an ambassador for the federal state of Baden-Wuerttemberg.

The WPR outlook is double: regional anchoring, on the one hand and openness to the world and diversity, on the other – both key features of this ensemble. At the same time, it has become a major player in its home region. This is driven by the orchestra’s awareness of how relevant culture is for society as well as its commitment to the city of Reutlingen and the state of Baden-Wuerttemberg. During its guest appearances on the international stage, the WPR officially represents the state’s cultural life like it did, for example, on its three-week tour through Japan in 2006. But on all its other tours and guest concerts too, whether at the Vienna Musikverein, the Berlin and Cologne Philharmonic Hall, the Amsterdam Concertgebouw, the Dortmund Concert Hall, the Lucerne Culture and Congress Center or the Zurich Tonhalle, whether in Salzburg or Baden-Baden or at festivals like Ravello, Warsaw (Beethoven Festival), Dobbiaco (Gustav Mahler Music Weeks) or Besançon (International Music Festival), the WPR itself as an ambassador.

The WPR performs with artists such as Lang Lang and Thomas Hampson, Sabine Meyer and Frank Peter Zimmermann, Christoph Poppen and Fazil Say as well as with other genres and musical styles. Since it has established its own kaleidoscope series in Reutlingen, which has been popular for decades and is dedicated to programs beyond the classical-romantic orchestra literature, it has frequently been invited to perform with artists from different genres such as jazz (James Morrison, Till Brönner , Klaus Doldinger, Ute Lemper or China Moses), world music (Natasha Atlas, Yasmin Levy, Burhan Ocal) or musical, Latin, hip hop, chanson (Dominique Horwitz) or pop (Max Mutzke). During special FOKUS events, the orchestra (2013) and of the Jewish Diaspora (2016) before taking up Arabic music in 2019.

The WPR is intensely committed to its future audiences and reaches more than 8,000 young listeners by giving over twenty five children and family concerts in Reutlingen every year. First offered in 2009, the "Federal Prize for Cultural Education" What awarded to the WPR for its project featuring artists with disabilities. In 2014, the ensemble was again nominated for this award for a large-scale musical theater project brought to the stage with a performing and composing cast of 250 children at the 62nd German Mozart Festival (2013). In 2015, the WPR established a concert series for people with dementia in cooperation with the Alzheimer Society. In 2016 and 2017, this was followed by FUGATO, an intercultural project involving refugees, which was extended to 2018 due to popular demand. Since 2018, it has been attracting attention by offering an interactive live streaming format (NETWORK ORCHESTRA) which is unique in Germany and accessible to rural audiences.

The WPR’s artistic work has been documented by a variety of CDs and radio productions, among them several world premiere recordings. Since the 2017-2018 season, Fawzi Haimor has been Music Director of the WPR.