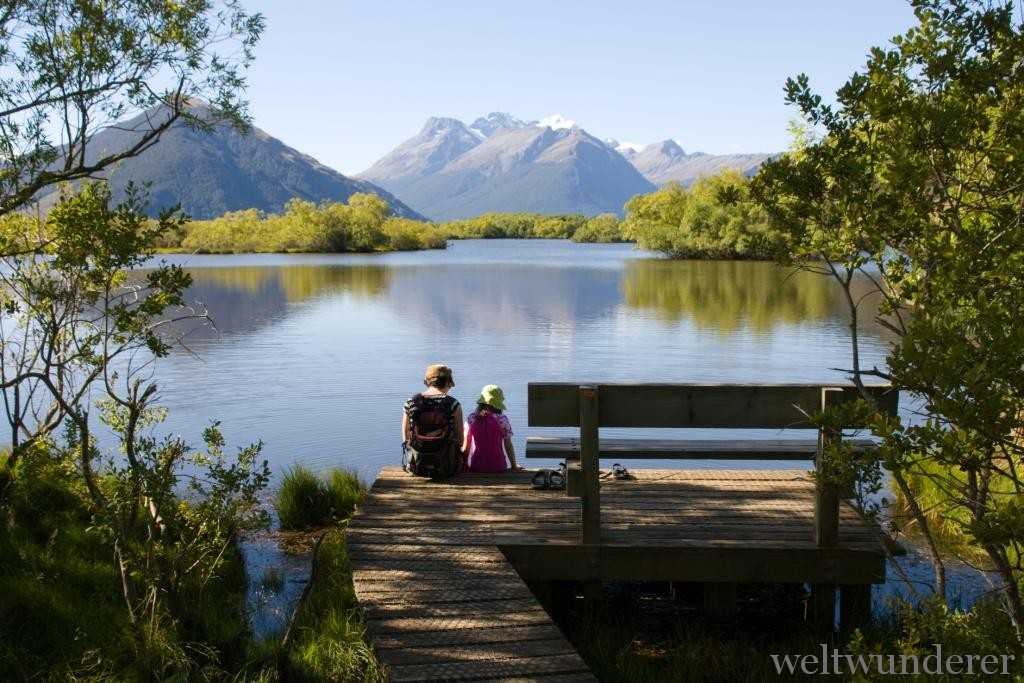 Photo show: You should see these lakes in New Zealand

New Zealand has wild coasts and idyllic beaches, inland lapping volcanoes, snow-capped glaciers and mystical rainforests. For a little peace and relaxation from the grandeur of the landscape care many small and large lakes. Some are nice for a break in between, others so breathtakingly beautiful that it would be a shame to miss them.

On our journey through New Zealand, we have often stopped at various lakeshores. Lakes had some very practical advantages, especially with children, we found: they have no wild, dangerous surf or steep cliffs to fall from. As they are mostly between mountains, lakes are often less rough and windy. That’s why it camps safer and more comfortable on its shore.

Ducks and geese, which can be found cute and feed at the campers’ breakfast, prefer to live on lakes rather than on the sea – a big advantage from the point of view of our animal-loving children. And, not to be underestimated: For a spontaneous bath one hopes much better in fresh water, which gets warm in nice weather, at least in the shallow-water-plunge area.

After all, almost all the lakes in New Zealand are simply beautiful photo opportunities; whether black swans frolic on it or picturesque footbridges in front, reflect snow-capped mountains in it or primeval forests line the banks, the water looks dark blue, milky white or squeaky green, does not really matter.

The lakes we present to you are just a tiny, totally inadequate selection from the more than 4,000 lakes that New Zealand has to offer – hence the name of the country?? 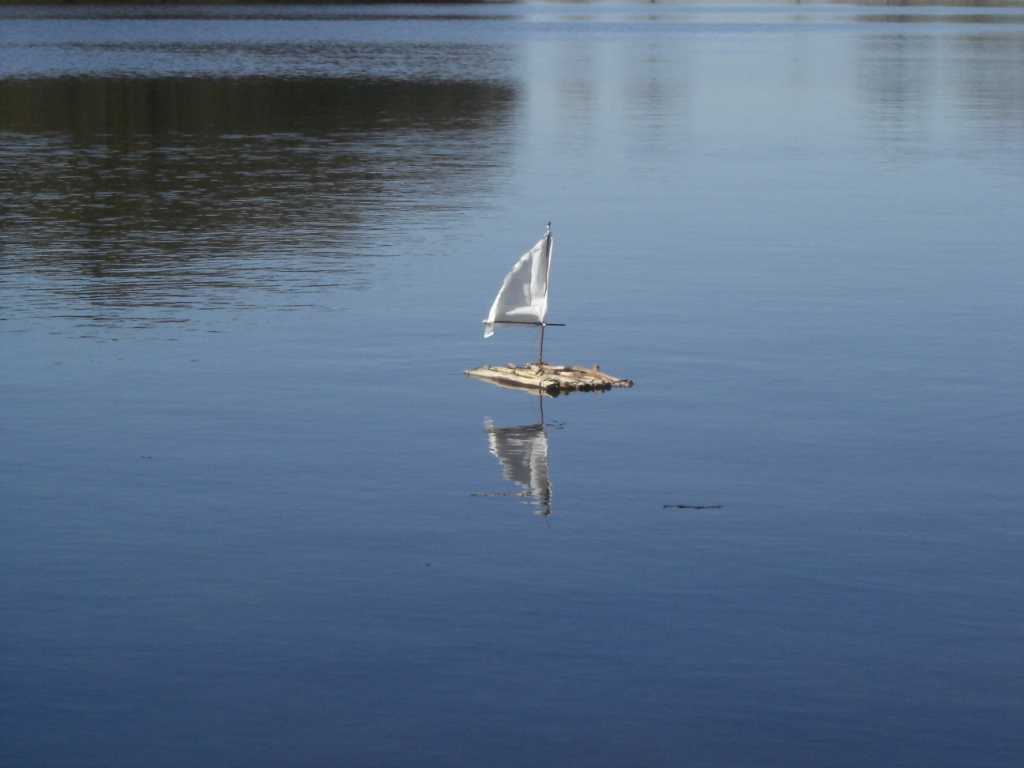 The most beautiful lakes on the South Island

Most of the lakes found on the South Island are ancient – remnants of the mighty glaciers that once covered the entire mainland and created deep valleys. Deep and surrounded by high, snow-capped mountains are the most, which often provides splendid reflections. The largest lake on the South Island is Lake Te Anau, while Lake Manapouri is often considered the most beautiful – we personally do not find it now, but hey. 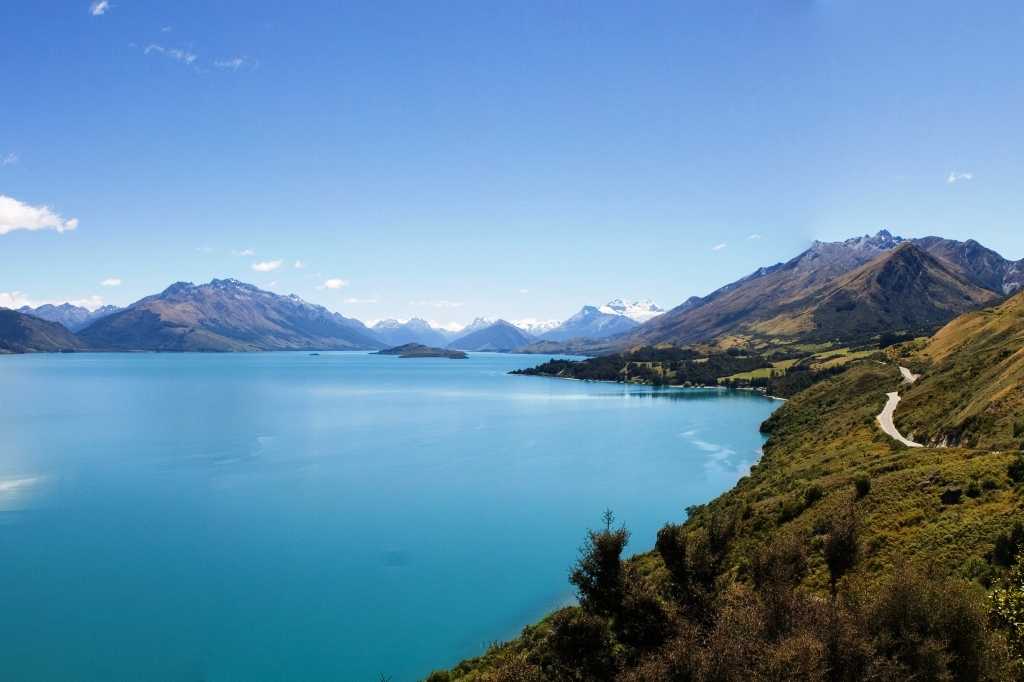 Queenstown’s pride and joy is this squeaky-blue, long-drawn lake. The panorama while driving to Glenorchy is really a feast for the eyes. If you like kitsch, you can sail across the lake in a traditional paddle steamer. And the sandy lakeshore at Glenorchy not only looks idyllic, our children splashed here in the super-flat water that was quite warm at the southern island. 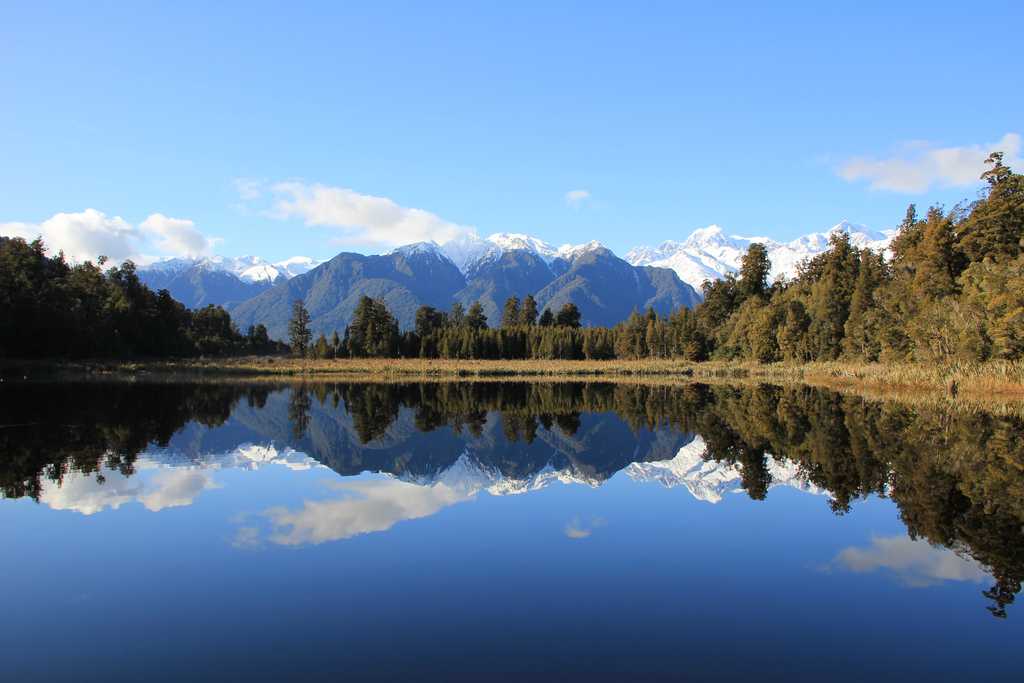 Postcard motif complacent? The Lake Matheson, conveniently located on the way to Fox Glacier delivers reliable, even if you have no professional camera with you. By the way, the peaks of Mount Tasman and Mount Cook / Aoraki – breathtaking – are reflected in the clear water! Every tourist drives past here, and at the relevant points on their banks, it sometimes happens like in a dovecote. Nevertheless, these two lakes are not for nothing “Must dos” on the New Zealand list. Do not miss it! A lake full of ice cubes, you could say. But most people do not say anything at the sight of this glacier lake. The walk is absolutely worth it, and if you have some time, book a boat tour on the lake at the i-site in Mount Cook Village. You do not spontaneously get a place in a dinghy at the pier. We are still annoyed today … 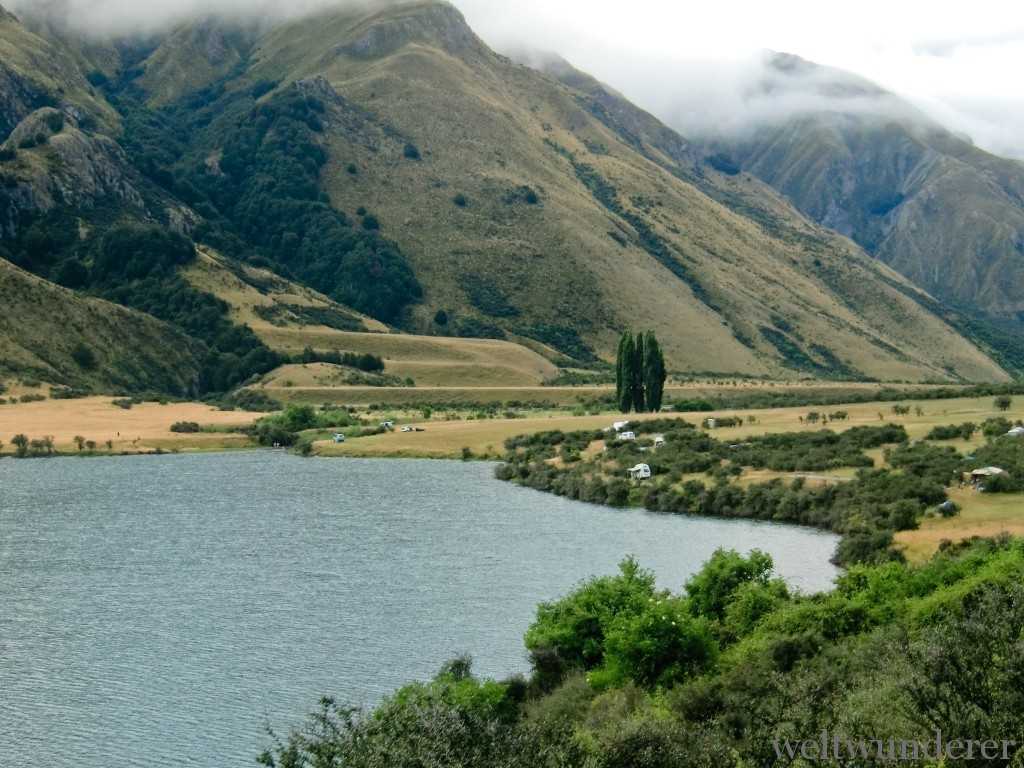 Moke Lake at Queenstown – the heart of silence

Here we lost our hearts – do I have to say more? This lake breathes such a tremendous calm and grandeur that you feel very small. And never want to leave, even if the water is pretty fresh for bathing. 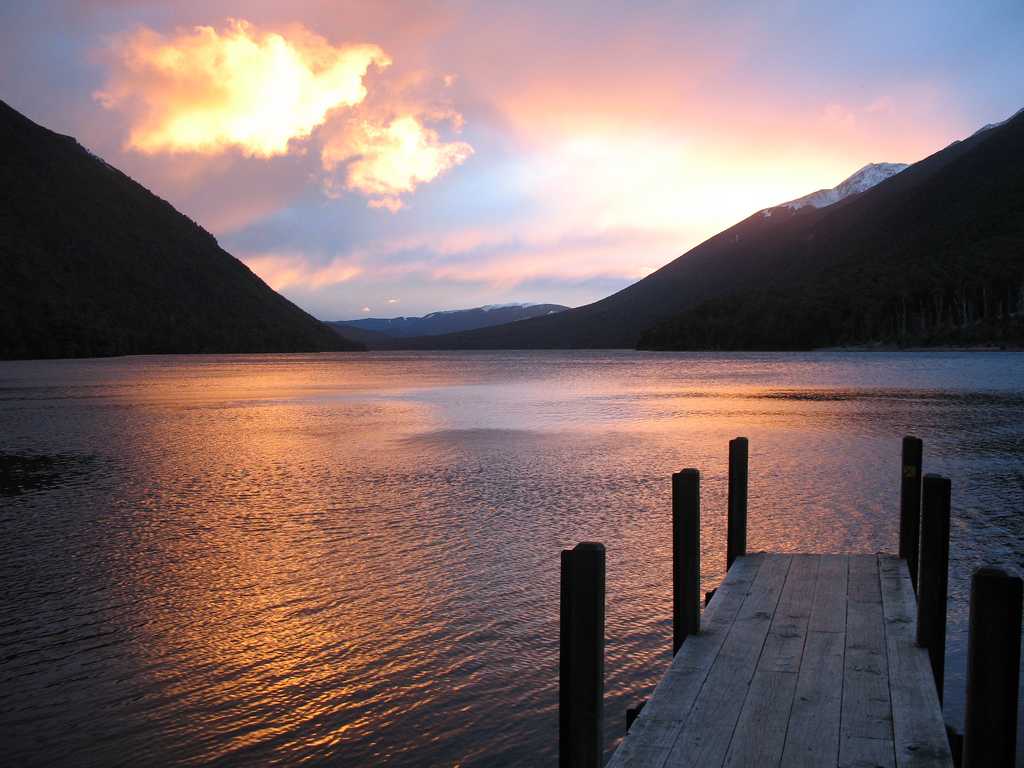 Clear case of photo-cheating here. Yes, the lake looks really idyllic with its jetty and the high mountains behind it. But what you do not see in the photos are the hordes of sandflies lurking on the shore. We took some pictures and drove on. A pity! A lake is blue, clear. This one is very blue, which is due to some algae. Otherwise, the waters of Blue Lake at Nelson Lakes National Park, which is only accessible by foot via the Travers-Sabine Circuit, are mostly transparent. And it is as clear as no other lake in the world, with visibility of up to 80 meters. Even distilled water is not clearer. Unfortunately, bathing is strictly prohibited here, not for water conservation reasons, but because Blue Lake aka “Rotomairewhenua” is sacred to the local Maori.

The most beautiful lakes on the North Island

There are fewer glaciers on the North Island and the mountains are less spectacular – at least at first sight. However, many lakes in the center of the North Island are the result of volcanic eruptions, and the history of Lake Rotomahana quickly teaches Naserümpfer that it is spectacular from time to time. New Zealand’s largest lake, the mighty Lake Taupo, was born on New Zealand’s largest volcanic eruption – and we’re keeping our fingers crossed that one does not repeat itself!

Bathing in a volcanic crater – check!

As the largest lake in the country and even across Oceania (660 square kilometers!) You can hardly miss it, the main highways run along its shore. Even if you do not steer a motorboat out onto the lake or drop you off an airplane high above the lake – stop at least once and marvel at the gigantic expanse of water. We also marveled at the many white pumice stones that lay on the shore and had a lot of fun with these “weightless” stones floating on the water. 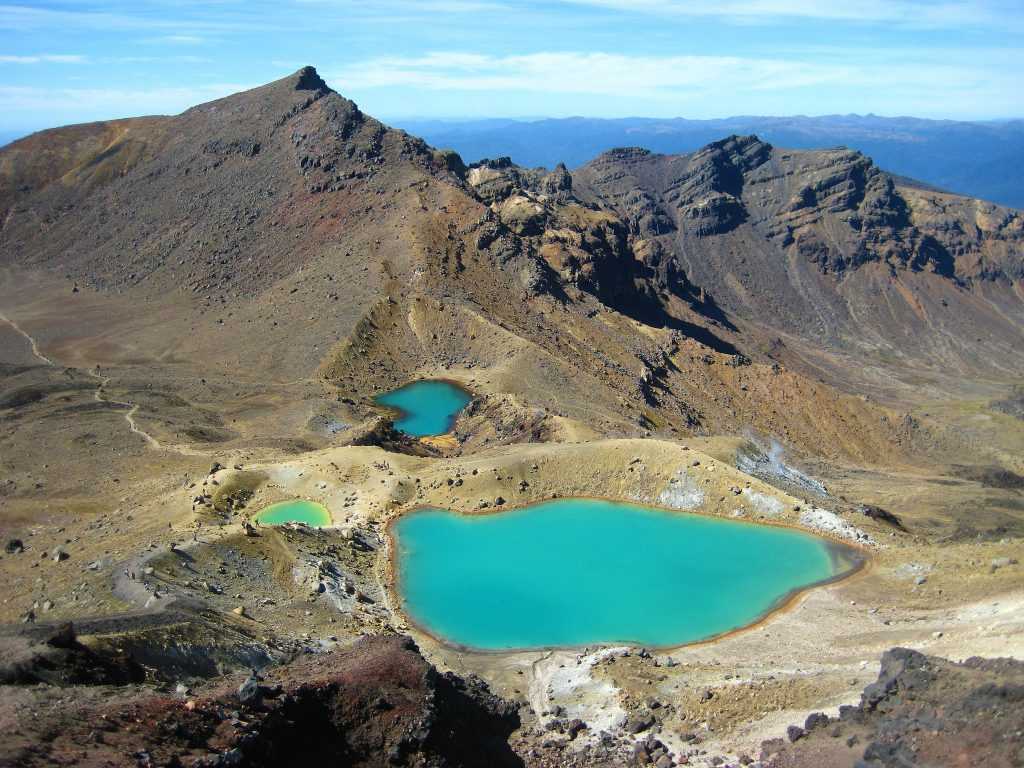 The “Emerald Lakes” are in the truest sense of the word jewels: strung on the crater rim of Mount Tongariro, they pass on the Tongariro Alpine Crossing. By the way, bathing is not allowed here because some harmful minerals are dissolved in the water (hence the nice color). 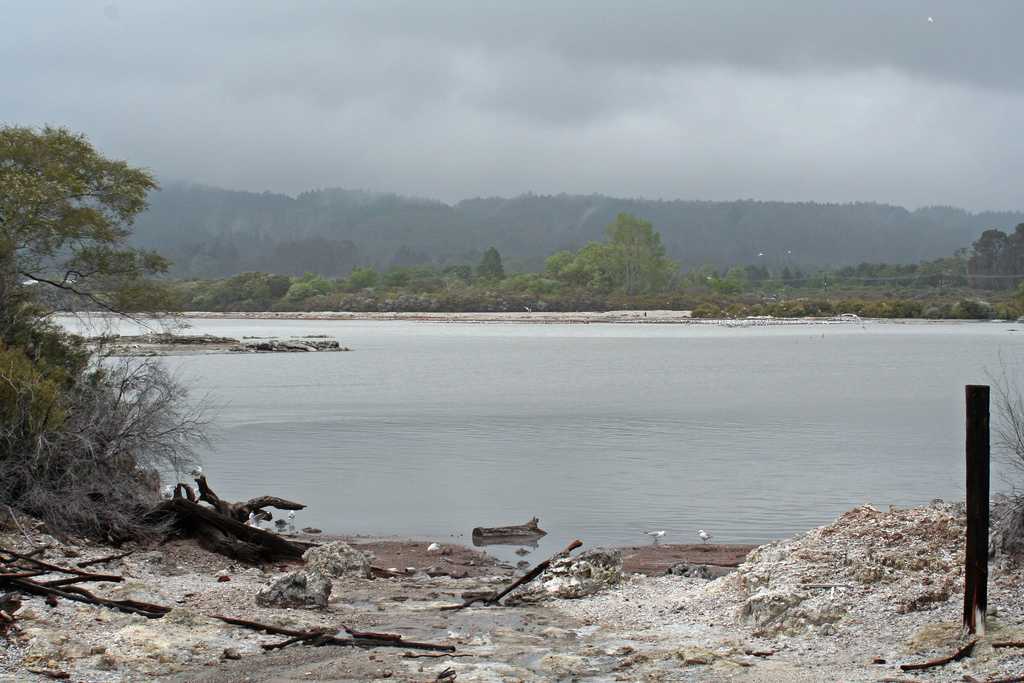 Lake Rotorua from its scary side © FlickR / Ruth Hartnup

How you experience this lake depends entirely on where you go to its shore. Right in the city center of Rotorua, on the Sulfur Bay, it looks a bit spooky at times – just the thermal area. Here are also like dead birds around, allegedly smothered. This is not idyllic, but very exciting! There are a lot of other great things to do around Lake Rotorua. As I said before, this lake is a reminder of the tremendous power that slumbers under the North Island and supposedly should break out at any time. It’s also beautiful because of its steaming bank rocks and the many black swans that always make you melancholy … Is not it nice? Taranaki at Lake Mangamahoe © FlickR / Phil Whitehouse

Kitsch Alert If you could not see Lake Matheson and its mirror surface, then spare at the feet of Mount Taranaki. In the water of Lake Mangamahoe, the volcanic dome, which was already allowed to do doubling of Fuji-san, is perfectly reflected in calm weather. Dune lakes are another interesting thing that you will encounter more often on the North Island. And the three Kai Iwi Lakes are their finest representatives: white-sanded, with gently sloping shores, always a little warmer than the sea and full of camping kiwis (ie, the lakeshore). The perfect rest after too much spectacular New Zealand scenery.

Which are your favorite lakes in New Zealand – and why? We appreciate your tips and are happy to add your photos to our list!