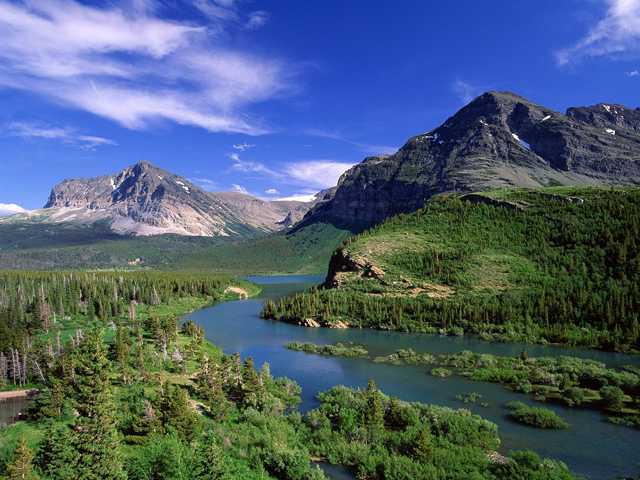 The Pocono Mountains in northeastern Pennsylvania, part of the Allegheny Plateau, are a contiguous natural and cultural region spanning more than 6,000 square kilometers. Because of their versatile habitats and the numerous recreational opportunities, they are a popular destination and recreation area in all seasons, which is why there are also many accommodation and catering options in the small villages of the region. A total of about 340,000 people live in the region, but especially during the summer months are still many thousands, especially from the northeastern states added to have their summer home here.

The Pocono Mountains are criss-crossed by the Delaware River. In essence, the area consists of wooded hills and mountains with lakes in between. The highest point in the mountain range is Camelback Mountain, which is only 650 meters high, but soaring above the adjacent valleys, which can be viewed from the summit on clear days to New Jersey and New York. At Camelback Mountain is the largest of the numerous ski areas of the Poconos with many trails and runs and 16 lifts. For the summer months has been provided, the ski resort is also the location of a water park with no less than 37 water slides. Also on the mountain is the Big Pocono State Park (access via Tannersville, park closed from mid-December to early spring), which has a network of trails for hiking, horseback riding and cycling. Tannersville has an outlet shopping center.

From Interstate I-80, the main traffic artery in the Pocono Mountains, you can get to Stroudsburg in a few minutes from Tannersville. The small town with about 6000 inhabitants has a worth seeing center with restaurants, small shops and art galleries on tree-lined streets. Stroudsburg is considered the tourist hub of the area, with many hotels to choose from, and just minutes to the Delaware Water Gap, the breakthrough valley of the Delaware River that marks the Pennsylvania-New Jersey border. This valley. The National Recreation Area is another popular recreation area with rock climbing, skiing, hiking, fishing and canoeing opportunities. Stroudsburg itself has a number of attractions, including the historic Monroe County Courthouse dating back to 1890 (Monroe Street) and a remarkable collection of 180 turn-of-the-century homes in the Academy Hill Historic District.

About half an hour’s drive north of Stroudsburg, past the small town of Mount Pocono with its casino hotel, opened in 2007, one of two in Pennsylvania, leads to Tobyhanna. Previously, you pass Stillwater Lake, a 127-acre reservoir that was one of the places where ice was cut and sold before the age of the freezer. With just over 6,000 inhabitants, Tobyhanna is one of the larger resorts in the Poconos. From here it is only a few minutes to two other state parks. Tobyhanna State Park, located on the site of a former military training facility, has several hiking trails, camping and picnic areas and a beautiful lake for swimming, fishing and boating. In winter, ice fishing and ice skating are popular, and there is a designated track for snowmobiles. Next door is Gouldsboro State Park. Again, there is a – but smaller – lake, where boats are also allowed. For the warm months there is even a small beach, in winter you go to ice fishing on the lake. Also in Gouldsboro State Park there are some trails and trails for use with the mountain bike. To the east of Tobyhanna is Canadensis, a place called the “Heart of the Ponocos” and where there are numerous accommodation options.

On the northern edge of the low mountain region lies the small town of Hawley. The town is located at the northern end of the third largest lake in Pennsylvania, Lake Wallenpaupack. The elongated, narrow lake is up to 21 kilometers long and is a magnet for many day trippers and vacationers from the major cities of the East Coast. In summer you can swim here, boating and fishing, in winter, the ice skaters meet here. A special feature is the annual ice golf tournament on the frozen lake.

The Pocono Mountains have other state parks in addition to the listed ones, offering visitors plenty of opportunities for recreation, leisure activities and outdoor experiences. The Hickory Run State Park is one of the largest and here also include hiking and cycling on a more than 70 kilometer long network of trails to the main leisure activities. In this way, for example, waterfalls or discover the sand Spring Lake, where a beach is available from May to September. The main attraction within the state park is Boulder Field. It is a large field of boulders and boulders that have been formed in geological processes over thousands of years since the last ice age. Campsites are available at Hickory Run State Park.

The Poconos also regularly register thousands of visitors who are less interested in the scenic attractions of the region. Also known as the Tricky Triangle, the Pocono Raceway is a high-speed racetrack that holds acclaimed races of various series every year. Opened in 1971, the 4-kilometer-long stadium holds more than 76,000 spectators and is located in the sparsely populated area of ​​Long Pond.