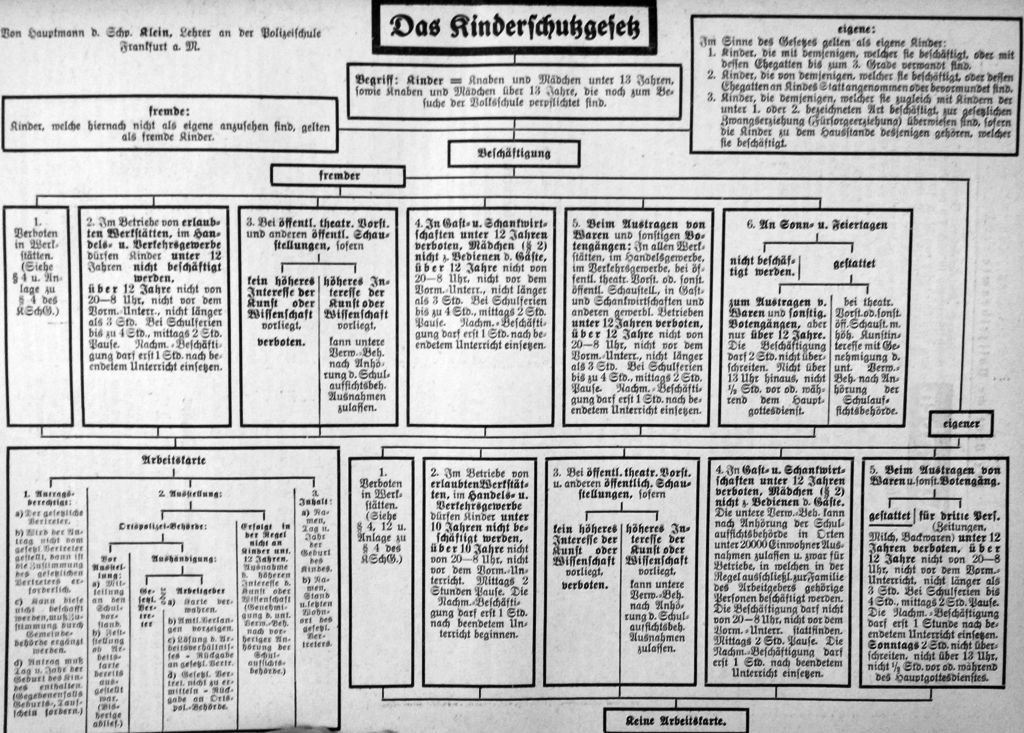 The youth protection law in the Third Reich was truly National Socialist and represents a change in all social and professional youth work in the German fatherland. The law ends a century-long struggle which was fought for effective youth protection. A reactionary state leadership, a wrong youth education – arose from a wrong attitude towards youth -, the tornness of the German people in classes and parties and the purely materialistic thinking in economy and work prevented the protection of minors from being achieved until then. Just as the National Socialist idea and revolution in other areas of life removed these obstacles and obstacles and replaced them with the laws of life of the national community, so it also has this struggle for the protection of minors by promulgating the “Law on Child Labor and Working Hours of Young People of April 30th 1938 (Youth Protection Act) “ended.

It had become clear at the beginning of the 19th century that economic protection of minors could only be achieved by law. After all, it took many years before the "Prussian regulation on the saturation of young workers in factories" was adopted on March 9, 1839. It was a start. However, it could mean little from a technical point of view, because on the one hand there was no state labor inspection, which would have caused the entrepreneurs to comply with the regulations, and on the other hand, due to the fact that they were limited to factories, it did not take into account the fact that considerable parts of the young people were employed in handicraft businesses and in the home industry, branches of industry – to which the regulations did not apply. These land laws had mainly come about because the army had determined that the industrial areas with their contingent to replace the army were lagging behind the purely rural areas, and that this impairment of young recruits was caused by the excessive working hours and night work.

The regulations prohibited children’s factory work before the age of 9. It was forbidden for young people who have not yet turned 16 to be employed for more than 10 hours a day. The employment of such "young people" was prohibited between 9:00 a.m. and 5:00 a.m. Work performance by young people on Sundays and public holidays was completely prohibited. Improvement of this provision is then contained in the "Law concerning some amendments to the regulations of March 9, 1839 on the employment of youth workers in factories of May 16, 1853":

The age of protection for the young factory workers was increased from 9 to 12 years – the working hours of the children between 12 and 14 years were only 6 hours – night work was prohibited between 8:30 p.m. and 5:30 a.m. – from a quarter of an hour in the morning and in the afternoon to "allowance" of the young workers increased to half an hour. It was the first time that the youth had to keep a workbook.

In the course of the following years, similar regulations introduced youth protection for non-Prussian states. Almost unchanged, the provision of the protection of minors in Prussia was adopted in the North German Confederation’s 1869 trade regulations. An amendment to these trade regulations, published on July 17, 1878, prohibited any employment for children under the age of 12 unlimited employment of children under the age of 14 to 4 hours a day.

The amendment of 1891, the so-called Labor Protection Act, brought a further substantial increase in the protection of minors. Here, for all companies with generally at least 10 jobs, any work by children under the age of 12 who were still obliged to attend elementary school was prohibited; the night’s sleep was fixed between 8:00 p.m. and 6:00 a.m. the Federal Council was authorized "to prohibit the use of young workers for certain branches of industry which are associated with particular risks to health and morality" or to make them dependent on special conditions; night work by women was prohibited and commercial enterprises were finally obliged to enable young people under the age of 18 to attend a further education school. After the turn of the nineteenth century, a few novellas on trade regulations were published. One from 1908 must be mentioned, since it stipulated the provision on the employment of young workers on all companies (not only on the factories, but also on the workshops), in which 10 workers were usually employed and as a result, the circle of young people affected by the increased protection of minors was significantly expanded. The development was completed with the "Child Labor Law in Commercial Enterprises" on March 30, 1903 (Child Protection Act); contain the regulation of the protection of own and foreign children under 13 years. After the end of the First World War, various working time orders were issued. In addition to these working time regulations, the Child Protection Act remained in force.

The National Socialist government reserved the right, in the interest of the state and the community of the German people, to conclude a centuries-long struggle on this section of social policy for young people in working life through the "Law on Child Labor and Working Time of Young People of April 30, 1938".

“Protection of minors is national protection.

Raising all young people to healthy people, both physically and mentally, is an ethnic necessity and a duty of the National Socialists.

It is the will of the Reich government to provide protection and support to German youth and thus to increase their performance. "

If the law was carried by such a National Socialist spirit and carries such enormous responsibility, it would be wrong to force enforcement by means of police or even police. That would not speak of National Socialist action either. The head of the organization of the Reich and head of the German Labor Front / DAF Dr. Ley had thereby conveyed that even in the area of ​​work and business, truly National Socialist achievement can only be accomplished if this achievement is borne by the community spirit. According to these principles established by the head of the DAF, this law can now also be implemented and applied.

The individual provisions of the law

The individual provisions of the law were held in such a way that they can be carried by the weakest company. The law came into force with regard to its vacation provisions when it was announced (April 30, 1938); in the other provisions mentioned below, it became fully applicable on January 1, 1939. Contrary to the previous protection of minors, which limited the age of protection to the age of 16, all young people up to the age of 18 are now covered; it was the same for all young people, regardless of the activity or professional group they were in – with a few exceptions for housekeeping, agriculture, shipping and fishing. The youth protection law with its provisions now provided the basis for maintaining health and, above all, for the suitability of German youth. Various circles repeatedly referred to the "social burdens" and the "monetary expenses" that resulted from the fulfillment of the youth protection regulations, but these circles were clearly proven that the National Socialist economic and economic policy was not determined by capital or by material production methods, but exclusively by the NSDAP in recognition of the need for performance and the protection necessary for the attitude of the national community. From this knowledge follows the fact that the implementation of the youth protection regulations was not charity and alms for the youth but is only a prerequisite for the increase in performance. The capital thus used pays off in many ways. If only through the protection of minors has it been possible to increase the creativity of people in old age by months, then the realization of this success will dispel any debate about the profitability of the protection of minors. The Reich Government also emphasized the basic principles of the law in the foreword:

The leisure time necessary for further professional training, physical training, shaping the personality and for political education is guaranteed.

The vacation of the young people and their sensible use are guaranteed. "

The long-standing demand is at the center of all protection provisions for young people after this sufficient vacation.

This special meaning of vacation was also taken into account by the provision of the law that already brought this paragraph into force on April 30, 1938. No law is able to make regulations that consistently represent the salvation for the last company, and the Youth Protection Act in particular leaves this structure in practice even the widest space and still appeals to the moral obligation for voluntary social responsibility of the German company leadership. The law could only create a minimum requirement for vacation and left it to National Socialism outside in the economic life of the people, depending on their ability, to go beyond this minimum requirement and to meet every requirement that the youth leader of the German Reich and the head of the DAF have always advocated for youth vacations. Thus it could be expected that in the Reich’s company regulations and collective bargaining regulations, every known holiday regulation for young people was used, which had already become a reality in a large part of the companies before the youth protection law was passed and reads as follows:

and with at least ten days of participation in a camp or trip run by the Hitler Youth, basically 18 days of vacation. "

Another fundamental sentence of the Youth Protection Act lies in the basic prohibition of child labor and this in turn fulfills an essential point of the National Socialist party program that this requirement raised in point 21. Child labor – all boys and girls under the age of 14 were considered to be a child – was fundamentally prohibited and only a few small handouts for sports and similar things were exceptionally permitted after fulfilling special requirements. The law also brought such a series of new provisions that an enumeration would go far in this regard. In the following, only the points should be pointed out, which mostly mean a complete new regulation contrary to the previous provisions.
The regular working hours; vocational school instruction; Preliminary and final work; Maximum working hours; Night rest and non-working time; Rest breaks; Ban on Sunday work.
These points briefly show the most important provisions of the Youth Protection Act – again emphasized – insofar as they meant a real redesign of youth law. The law provided for certain transitional provisions for individual points, with the sense and purpose of carrying out the changes in the factories required by the reorganization slowly and in accordance with the operational conditions, but with the aim of the law. The NSDAP departments had to ensure the successful development of youth protection; They had been granted the right to lodge a complaint by law (§ 25, 3) that the head of the German Labor Front, head of the organization of the Reich, Dr. Ley, transferred to the head of the youth welfare office of the DAF. 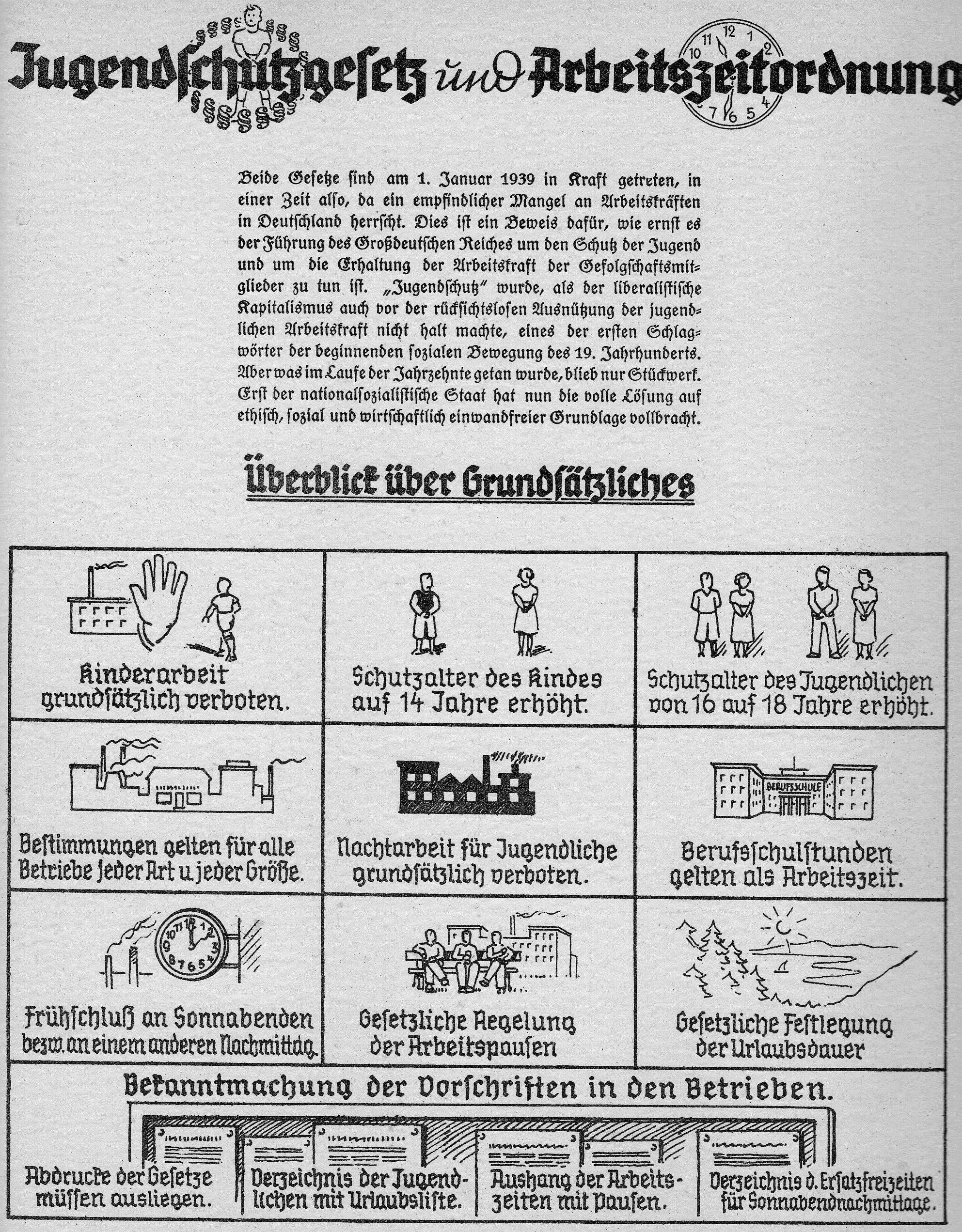