The basket is full – many puzzles with resolutions have been set here. So scroll around and choose, easy and difficult, funny and logical …

And here is something to tinker with, a game based on the Monopoly pattern, which is about interest instead of real estate. Check it out! 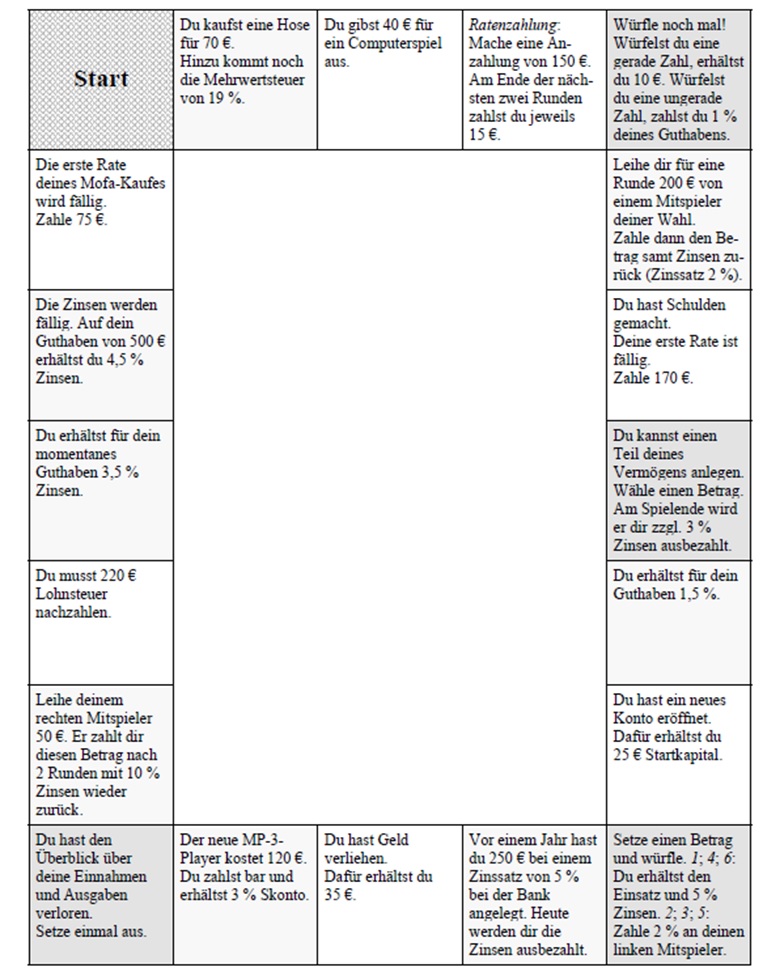 Solutions to the December puzzles 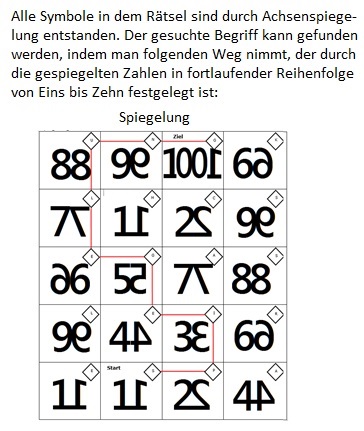 To the hidden object game 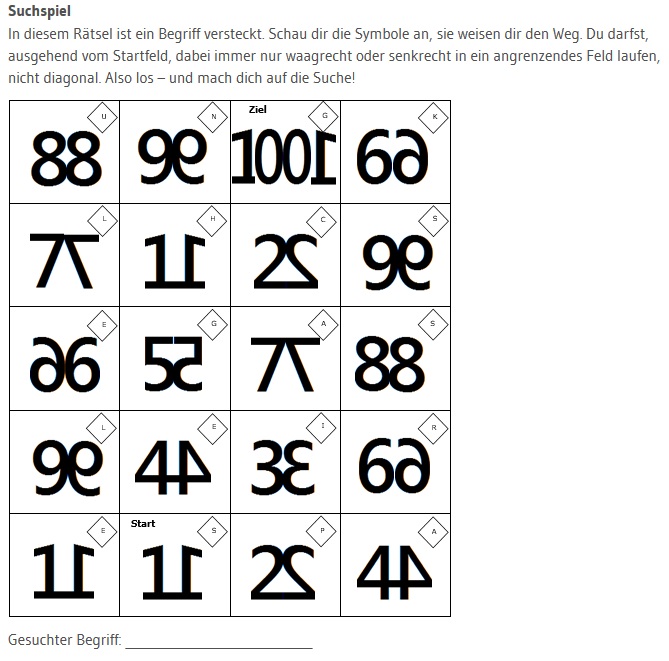 And then a "classic" problem – have fun! 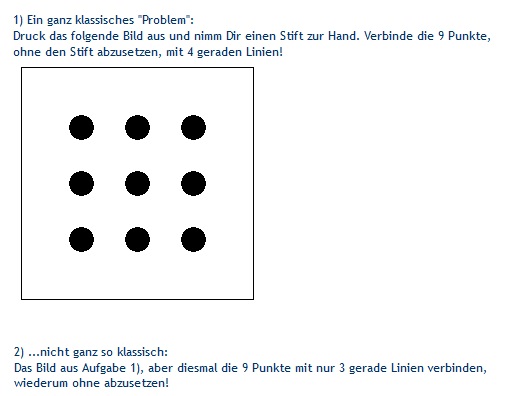 Solutions to the last tasks:

Who threw the ball?

The last tasks were:

1. To get used to it again, a ‘simple’ question: pheasants, rabbits and deer

A pheasant costs CHF 0.50, a rabbit CHF 3 and a deer CHF 7.
How many animals are to be taken from each animal type if 100 animals cost CHF 100 and at least one animal from each type?

2. Who of you four threw the ball into my window??

If only one of the four lied, who threw the ball?
If only one was telling the truth, who was the culprit?

3. For proficient mathematicians: How far is it from "lion" to "bear"

(The task is not easy. It leads to an equation system of 4 equations with 4 unknowns!)

After a cup in the “Löwen”, Mr. Bieri (at a constant speed) sets off for the “Bären”. At the same time, Mr. Weinhold leaves the “bear” towards the “lion”. Mr. Bieri covered 200 meters more than Mr. Weinhold to the meeting point. After a conversation they go on, but only at half speed due to contemplating the chance meeting. Mr. Bieri still needs 8 minutes to reach the “bear”, Mr. Weinhold another 18 minutes to the “lion”. Calculate the distance from the "lion" to the "bear".

Question 1: Is it true that either door 1 leads to freedom or the answer to this question is a lie?

Question 2: Is it true that either door 2 leads to freedom or the answer to this question is a lie?

Question 3: Is it true that either door 3 leads to freedom or the answer to this question is a lie?

If the answer is yes, we can ask directly for two of the doors. The answers will be lies. If the answer is no, the answer to questions 2 and 3 will be true and false once and we will ask our second question:

Question 2: Would my third question "Do door 1 lead to freedom" be answered with "yes"??

If this question is answered truthfully, question 3 must be answered incorrectly and vice versa. However, the answer to question 2 must be "no" if door 1 leads to freedom.

If the supervisor answers "yes", we ask a third question:

Question 3: Would my question "Do door 2 lead to freedom" be answered with "yes"??

The prisoner and the doors

The CBCACBC train sequence always leads to the goal.

Case 1a: R1 and R3 are on the same side. Then we are released after pressing C once.

Case 1b: The bars that are on the same side are cyclically adjacent. (“Cyclical” means that R1 and R4 are also adjacent.) After C, this is still the case. B now results in either the release position or the situation described under 1a; after the next C at the latest we are free.

Case 2: 3 bars are on one side, 1 on the other. According to CBC, this is still the case (since B, C preserve parity). A either brings us to liberation or in case 1. There are we exempted after another CBC at the latest.

At least 3 inscriptions are wrong – solution for original task

The picture is in box 3.

Here are three tasks that can be solved with logical thinking – quite tricky, isn’t it? (Source: http://www.janko.at/Raetsel/)

You are in a large room, the three exits of which are guarded by an attendant. You don’t know how and why you are here, but ultimately it doesn’t matter. However, remember that you have a rendezvous with your girlfriend tonight that you definitely don’t want to miss. – You speak to the overseer, who answers: “One of the three doors leads to freedom, the other two leads to death. You can ask three questions that I will answer with ‘yes’ or ‘no’. But be warned, I will tell the truth exactly once and the other two times lie. ”- What questions do you have to ask in order to be able to keep up with your girlfriend?

2. The prisoner and the doors 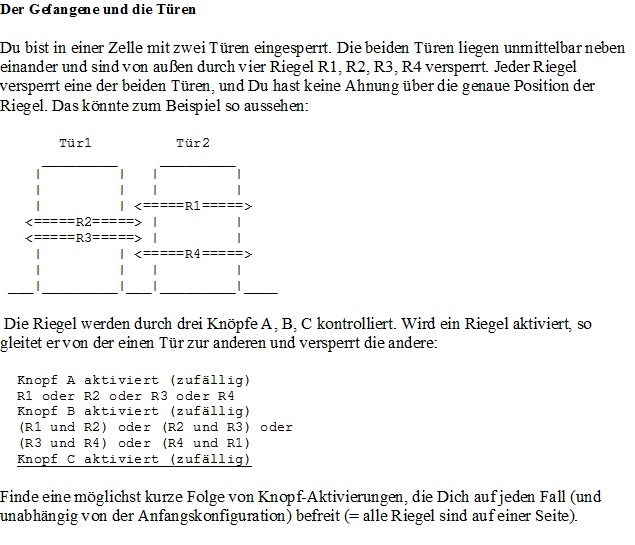 Porcia, the rich young nobleman from Shakespeare The merchant of Venice has four boxes; Porcia’s picture is hidden in one of them. There is a sign on each box, the inscription of which is either true or false. A client had to find out which box Porcia’s picture was in. If he succeeded, he could marry Porcia; otherwise, he had to remain married for the rest of his life.

At least 3 inscriptions are wrong.

What is the profit? – I get 2 marks. But read this discussion, which goes on further – sometimes funny – considerations:

The beggar and the farmer –

2, 2 and 9 years are the right answer. How the beggar knows the house number remains a secret. However, there are two combinations where the product is 36 and the sum of them is equal (1, 6, 6 = 13 and 2, 2, 9 = 13). For this reason, the house number alone did not help. Only the hint that there is an eldest son leads to the solution.

What is the profit?

A dealer bought a commodity for seven marks, sold it for eight marks, bought it back for nine marks, and sold it again for ten marks. How much did he earn??

We are looking for an eight-digit number that contains 2 1s, 2 2s, 2 3s and 2 4s. The ones in this number are separated by a number, the two by two digits, the three by three and the four by four digits. What is the number?

The beggar and the farmer (Warning! Logical, but around the corner)

A beggar wants to know from a farmer how old his sons are. The following dialogue takes place between the two:
Beggar: "How old are your three sons?"
Bauer: “If you multiply their ages together, 36 comes out. If you add their ages, this gives our house number. "
Beggar: "Now I know your house number, but …"
Bauer: "Just hear how well our elder plays the violin!"
Beggar: "Thank you for the information – now I know the solution."
How old are the farmer’s sons?? 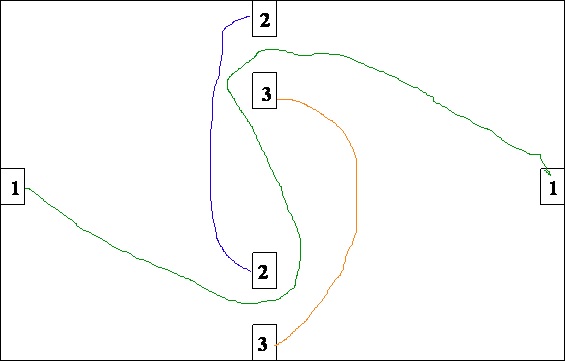 The color can only be determined from C. If C’s brand had been red, then B would have known that his brand wasn’t red:

“If my brand were red, A would see two red brands and know that its brand is not red. But A doesn’t know that his badge is not red. That’s why my brand can’t be red. "

It follows that if C’s brand had been red, B would have known that its brand is not red. But B didn’t know his brand wasn’t red, so C’s brand couldn’t have been red.

If you replace the word "red" with "yellow", the same reasoning shows that C’s brand wasn’t yellow either. That’s why C’s brand has to be green.

The man lives exactly on the North Pole. If he goes 1 km south he is logically exactly 1 km from his house. Now he can go as far west or east without moving further from his house than 1 km. As soon as he goes north again, he always runs in the direction of his house. So the bear is a polar bear and white. 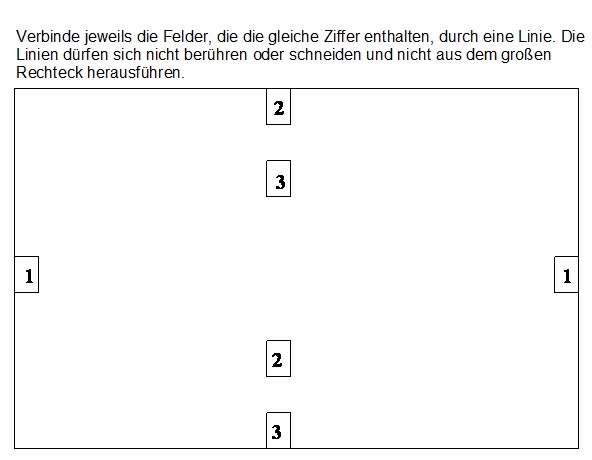 Three people – A, B and C – were all perfect logicians. Everyone could immediately deduce all the conclusions from any number of requirements. Everyone was also aware that each of the other two mastered logical thinking perfectly. The three were shown seven tokens: two red, two yellow and three green. Then they closed their eyes and put a badge on everyone’s forehead. The remaining brands came in a drawer. After the blindfolds were removed, A was asked: "Do you know a color that you definitely don’t have?" "No", answered A. – Then you asked B the same question and he said: "No".

Is it possible to deduce from this information the color of the brand that A, B and C wore on the forehead?

In an unspecified political assembly, one hundred politicians debated. Each of them was either corruptible or incorruptible. We are aware of the following facts:

a At least one of the politicians was incorruptible.

b At least one of every two politicians was bribed.

It can be concluded from these two facts how many of the politicians were corrupt and how many were incorruptible? 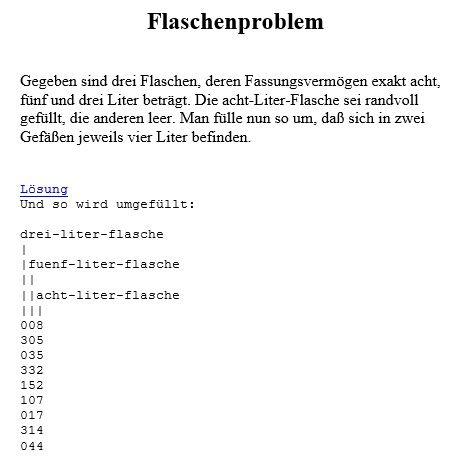 The new tasks for April – Have fun!

Bottles problem: There are three bottles with a capacity of exactly eight, five and three liters. The eight-liter bottle was filled to the brim, the others were empty. Now fill in such a way that there are four liters each in two vessels.

How high is the house?? And here is a story that you should only copy if you are sure that you can do as much as the hero of this story.

In memoriam: No – at least it was not set up in 1933, because the division into World War I and World War II did not take place until after World War II instead of. 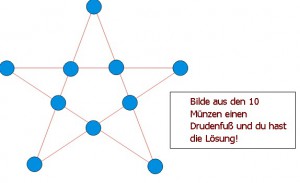 In memoriam "In true memory of the men who sacrificed their lives for us in the First World War." At least that is what the local chronicle claims, because the memorial stone is considered lost. Has it ever existed??

Coins task You have 10 coins. You should arrange them so that they form 5 straight lines, each with 4 coins.

Match task You have 6 matches. You should arrange them so that they form 4 equilateral triangles. The woods must not cross and of course you must not break them. 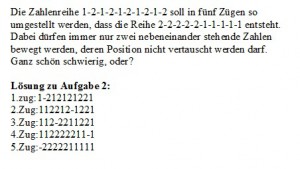 D. asks: How does 1 get to the last position or a 21 instead of a 12 on the first move? Here is an overview of the first train:

When we checked that, the hyphen irritated us about the solutions. He leads to incorrect assumptions, namely that only the 1 was moved. According to the rule, however, this is not possible. We cannot understand the meaning of the hyphen. Think it away!

Answer: 87 Know how the car is parked. You can see the cars from the back of the parking lot. Rotate the picture 180 degrees. Now the solution is clear to you.

On a particular lake, water lilies double their surface area every 24 hours. It takes 60 days from the day when the first water lily appears until the lake is completely covered. – On what day is the lake half covered??

Four injured Indians have to cross a suspension bridge. The four take 5, 10, 20 and 25 minutes each to cross the bridge (from side to side). Since it is already dark, you have to take the lamp that is on the bridge with you every time you cross. The bridge is so rotten that it only carries two Indians at the same time. That means: two always go over, then one has to go back with the lamp. Find a way so that all four (and the lamp) are over there after 60 minutes.

And here are the solutions for the September tasks! 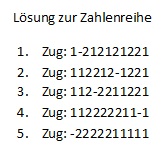 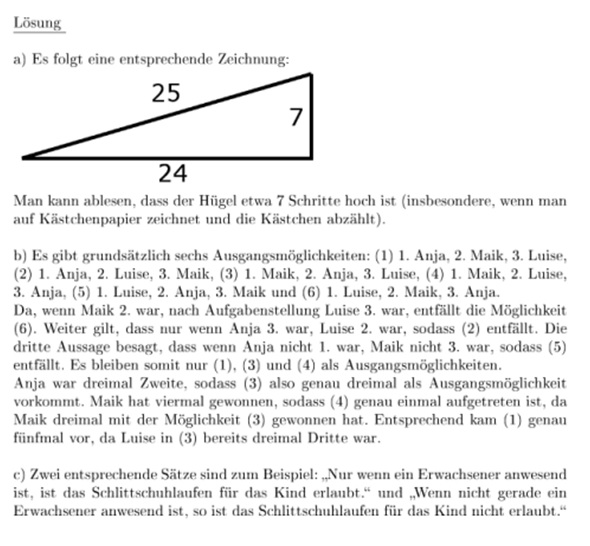 Solution "Who can snack on the apple" – well, you have found out for yourself!