The Rastiland family park in Salzhemmendorf near Hameln offers lots of water fun and unusual attractions. 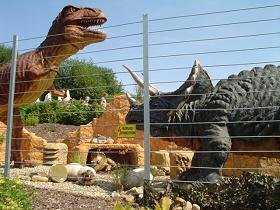 In the newly constructed water battle, young and old visitors sit at a water spray and wait on a quiet ride for the right opportunity to attack. Meeting the dinosaurs is a first challenge, but it is even more fun to catch the riders on other boats or even the whitewater rafting boats.

It goes without saying that you won’t get away dry yourself.

So it is advisable to go straight on to the rafting boats.

The Triceratops female tries to protect her just hatching young from the attacking Tyrannosaurus Rex – the fight of the giants, impressively staged with animated life-size dinosaurs, lets the visitors stay already at the entrance of this attraction. Just a few steps further, you escape the erupting T-Rex at the last second before boarding the supposedly safe rafting boat, which falls into the depth of a funnel on the 500 m long stretch sucked by a vortex of water and spits the guests out again after a rapid ride through a 12 m long tunnel and past a dangerous dinosaur in the idyllic valley of the Brachiosaurus.

This fast ride, which is permitted for children from 110 cm upwards, is only one of the unusual offers to be found in Rastiland near Salzhemmendorf. What distinguishes Rastiland from other amusement parks are the unusual attractions, which also offer experienced amusement park fans a lot of variety.

In many places children can become active themselves. In addition to the playgrounds, you can, for example, ride on a wave track with rustic companions or pull a bob up the mountain to whiz down the other side again. 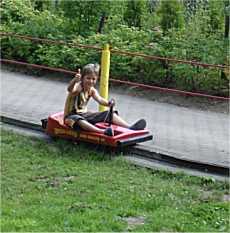 But Rastiland also has breathtaking attractions to offer.

Shooting on freewheeling rubber rollers in the bobkart track at up to 40 km/h through a steel ice channel and determining the speed yourself in two roundabouts, several ascents and descents is an unforgettable experience not only for the older children. By the way, smaller children can enjoy the ride on mum’s or dad’s lap, which can hardly meet the children’s speed requirements.

The next adrenaline rush is already waiting for the whole family. The decision is hard to make when you race in rubber boats from a height of 12 metres over the waterways into the depths. First the wave slide and then the tube slide? Or do you want to go straight for the breathtaking steep slide? Here, too, smaller children with mum or dad can take part in the fun, only the steep slide is reserved for people aged 12 and over.

Parents can then relax for a while on the benches under shady trees, while the children let off steam on the beautifully laid out playgrounds, use the ride attractions on the lovingly designed historical fair, ride on the children’s motorway or with the oldtimers, conquer the air with the bumper boats in the small lake or with the balloon carousel and much more. 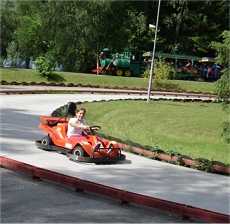 At many cosy places restaurants with pleasantly favourable prices wait for the hungry and thirsty visitors. Freshly fortified, Papa can then pursue his Formula 1 inclinations and whiz across the track with his offspring at his side in a two-seater go-kart while Mum proves her driving skills on the jeep track. Older children from the age of 12 are allowed to ride on their own. And in contrast to many other parks where you pay extra for karting, these are all included in the price.

The giant ship swing also promises a dull feeling in your stomach and right next door you can set off on the pirate trip to the domicile of the rough-legged sailors. Only those who survive collapsing ceiling beams, crocodiles, a wild shooting and more will see daylight again at the end to discover the many other attractions in Rasti-Land.

Rasti-Land was opened more than 30 years ago with a western track, vintage cars, a boat trip and a go-kart track. New and, as described above, very unusual attractions were added regularly, so that today the amusement park offers many attractive offers for the whole family. The original attractions – very well maintained and repainted – are also still there and bring back memories. 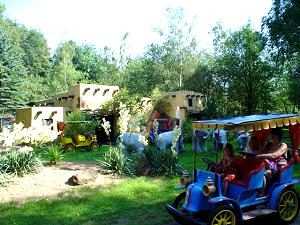 You can find out more about the history of the park and the individual attractions on the Rasti Land website.