How should parents and adults react? 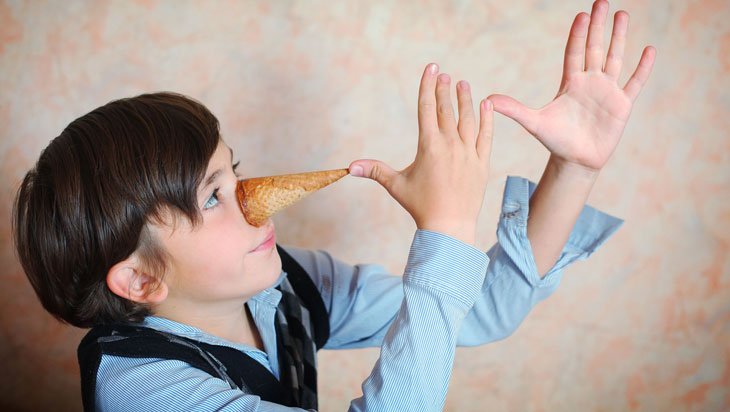 A large number were haunted by the media years ago, and since then it has stubbornly persisted in the minds: every person is said to lie an incredible 200 times a day. The number has now been put into perspective: Another study showed that on average there are about two untruths per day. We mostly use so-called white, also (pro) socially named lies or white lies to avoid strife, create harmony or simply put our own person in the foreground. But what’s the difference between a little falsehood and real deception? Do you generally have to avoid or prohibit lies? And how should parents and adults deal with children’s lies?

This phrase means that you can’t get far with lies. You can pretend something at short notice, but you can catch the lie very quickly because it has such short legs. The idea The lie that you don’t get far with it is widespread in many countries and cultures. In Britain, lies have no legs at all – "a lie has no legs" and in Africa there is a saying: "With a lie you can eat once, but not twice."

There are numerous investigations and individual findings about lying. The idea that it is basically wrong to deliberately deceive others is deeply rooted in our society. "You shouldn’t lie" is one of the ten commandments, philosophers like Kant plead for the truth, various articles and books deal with the phenomenon and authors like the American Brad Blanton recommend radical honesty. But twisting, cheating and cheating seem to belong to us humans, like death to life.

Younger people lie more often than older people, people under pressure more often than relaxed people, the less time there is for an answer, the more falsehoods creep in, emails are cheated more often than letters, men give false reports differently than women Most lies happen unconsciously and intuitively, and even great apes start talking when the going gets tough.

How to deal with it in education?

“Children only start to cheat when they are about five years old. Conscience develops between four and six years. Before that, the little ones often cannot distinguish between fantasy and reality, untrue stories happen just like that, ”says the graduate curator and director of the family school of the German Family Foundation in Fulda Julia Spätling. The younger ones usually even believe their imagined experiences in this phase of life.

But the essence of a lie is that it should deliberately deceive another person. Therefore: no reason to react badly here. “Parents are well advised to speak to the young children about the untruths, in a calm tone and without reproach. If it was a real, conscious lie, you should clarify in an open and familiar atmosphere, why you lied and why the lie was noticed, ‘explains Julia Spätling. "What does the child fear if it lies? Isn’t it telling the truth out of fear, out of shame, out-of-tune or in the end out of politeness? Often you don’t need a punishment, you need our support. ”

The PLUS for AXA customers

"Strong children need happy and satisfied parents to grow up carefree," is what the Fulda family school stands for Facility the German Family Foundation.

The Fulda family school is a place where parents can get answers to their questions, make contacts and find helpful courses ranging from birth preparation to parent-child groups and self-help groups.

In addition to the courses that are tailored to the needs of expectant and young parents, the parents receive family and partnership-strengthening help on topics such as security and clarity in their own actions, everyday life, self-care, stress and time management as well as reliable support and advice on a wide variety of problems. Click here to go to the Fulda family school.

Simple and targeted questions are a good way of doing this; and, whenever possible, a portion of humor. Because adolescents are just learning how to deal with lies and truth. On the one hand there is the large field of many small insincerities, which can be found everywhere in everyday life and which enable our social coexistence. And on the other hand, the incorrect assertion and mendacity, which happen intentionally and harm others. That is why we adults are also important role models: “Parents in particular are now moral educators and should set a good example. Because the child learns from them which moral values ​​are important and which are not. At this point, the child internalizes what is good or bad, what is fuss, what is a lie. With its own lies, it tests limits and possibilities. Basically, it signals a development step that needs our support, ”says Julia Spätling.

This is also confirmed by studies: the family and the immediate vicinity are the most important factors in behavior when dealing with truth. Even adult people often base their truth content on their surroundings: Is it in a certain group, e.g. It is becoming more and more common to reach one’s goal with specific untruths or to negotiate business with marked cards, values ​​and morals in this group decrease.

Learn how to deal with truth by understanding and reflecting

According to Julia Spätling, there are hardly any differences between boys and girls when it comes to lies. However, there were different reasons for cheating in certain age phases: “Small children usually reject lying on their own initiative. Children between the ages of six and nine are more likely to report untruths about their skills or possessions. Young people are more likely to lie because of differences of opinion and sanctions on the part of parents. Some lies seem justified for children and adolescents, e.g. if is about protecting a friend or parents. "

It is important that children actually understand why lying is wrong and what consequences it can have for themselves and for the others: “At some point nobody will believe you anymore, I will hurt the other, he is disappointed with me, I get tangled up even in my lie construct, I stand there stupidly, I lose face, the friendship breaks down. This is how you appeal to your child’s healthy conscience. "

Julia Spätling urgently points to the role of children with separation couples: “Unfortunately, there is always the sad fact that children have to lie with a separated parent in order to avoid conflicts between father and mother. In such situations, children are often involved in lying constructs or have to keep certain things secret. The adult forces the child to lie, so to speak, even though he knows that this is not correct and that the untruth is deliberately said here. Parents should always keep this in mind: Lying parents are just as uncomfortable for the children as vice versa. ”A good exercise is therefore to observe yourself honestly in everyday life: How often and for what do I actually use white lies? In front of my children?