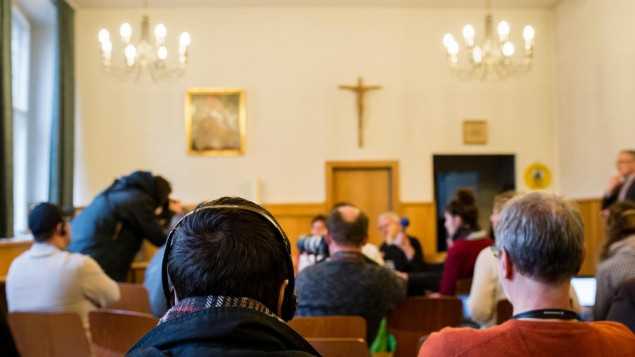 Father Andreas Knapp works in Leipzig with refugees of all religions. But again and again he encounters problems which Christian refugees from the Middle East have here – due to mobbing by Muslim fellow refugees.

Andreas Knapp: “What are you looking for? Ah! But that’s very bad. You need a liberation. Exemption from the radio licence fee. You have to go to the job centre. “

Wednesday afternoon in Leipzig’s Grünau prefabricated district: Andreas Knapp looks at the letter that an agitated woman holds out to him. The 58-year-old priest often meets people who spontaneously ask him for help. Knapp has founded an initiative with neighbours and members of the Catholic student community. They take care of refugees on a voluntary basis, regardless of their religion. They help children with their homework and their parents with everyday things.

The main occupation of the Catholic clergyman is pastoral care in a prison. He is a member of the Order of the Little Brothers of the Gospel, which draws on the ideas of the Frenchman Charles de Foucauld. One of the rules of the Order, founded in 1956, is that priests live near the needy. Andreas Knapp moved with three brothers to Leipzig-Grünau in 2005.

“And then we wanted to go to a neighbourhood that isn’t very noble, because we like to be with people who are marginalized a little, who don’t have a good reputation. About two years ago more and more refugees appeared here. Our neighbourhood here has a relatively high vacancy rate. So it came about that fugitives from the Middle East also moved to Grünau.”

The majority of them are Muslims. However, some fugitives belong to the Christian minority that has existed for centuries in countries like Syria and Iraq. Most Muslims and Christians live peacefully together in Leipzig, says Andreas Knapp. But sometimes tensions arise.

“Yes, there were problems here at a school in our neighborhood. There were Christian and Muslim children, who were relatively new in Germany, in integration classes. The Muslim children were just teasing a Christian boy. He had a cross around his neck. Probably they just got disrespect from their homeland, perhaps even hatred against Christians. The boy talked to his teacher, but then he did not intervene, and we found a solution that the boy changed schools.”

The Christian boy was taken out of school.

Andreas Knapp had also talked to the teacher about bullying on behalf of the family. It depressed him that no other way was found than to take the child out of school. He pleads for all newcomers to be taught our ideas of religious freedom:

“For it is important that people learn that such conflicts are dealt with in dialogue. And also there it is important that one talks to each other and also says: Religion, that is a decision of the individual, one must respect that, and there one may not reject or mob someone because he has made another decision.

Of the Christian refugees Andreas Knapp knows of the intolerance that religious minorities in the Middle East are confronted with in many places. This impression was confirmed during a trip to Iraq in autumn 2015. In 1990 there were 1.4 million Christians living in Iraq. According to UN estimates, in 2010 there were half a million. In the meantime even more have fled. The Islamic state and other radicals terrorize the Christians, and many Muslim neighbours join in or look the other way. Knapp’s experiences in Iraq were included in a book. It is called “The Last Christians”:

“The last Christians who still speak Aramaic, the mother tongue of Jesus. Since 2003, since the invasion of the Americans and British, the Christians have been taken into a kind of clan detention there. In Islam religion and politics are very interwoven from the very beginning. And in the perception of many Iraqis the states America or England are Christian states. And now there are also native Christians. And then they are suspected: Yes, they are Christians too, they are collaborators of the Americans, and we take revenge on them.”

Picture of Jesus and figure of Mary in the living room

Today Andreas Knapp visits a family from Syria in Leipzig-Grünau. The couple – a locksmith and a secretary – arrived with the two children in Germany in 2013 after many mistakes.

Andreas Knapp: “Hello! Well, you have a new hairstyle! Beautiful!

In the living room hang a picture of Jesus and a cross, stands a figure of Mary. The father is still at work – as a packer on the assembly line. Andreas Knapp helped him find a job. The woman speaks broken German. The eleven-year-old girl and the thirteen-year-old boy can communicate well. He tells what he experienced in a refugee shelter in Saxony:

“There were a lot of kids who were all Muslims. And I was the only Christian. When I go to them and say: Let’s play football, they said: No, you are a Christian! Then they insult me because I eat pork. And then there were some fights between us because I’m a Christian and they threatened me and stuff like that. Also in Leipzig, in my old school, some children insulted me because I am a Christian.”

“Me and my kids are always scared.”

As with the other refugee boy Andreas Knapp told us about, no other solution was found than to transfer the child to another school. He is doing well there. His mother is still worried.

“Now (my son) is also afraid, because many Muslims, and many Muslims say: Christian – problem! Now also problem. Me and my children (are) always afraid.”

Andreas Knapp also attributes her excitement to the fact that the family was traumatised by the war and the flight:

“These are very deep injuries, and of course there is the fear that this could happen again. Until you learn that different religions can respect each other, it will be a long learning process in our society.”