The research work of the Virological Institute focuses on an important human pathogenic virus, the human cytomegalovirus (HCMV). It is a common herpes virus that causes infections in about 40% of the Central European population. In many cases, these infections are without pronounced symptoms. However, the virus persists in a latent form in the body of the infected: it can reactivate in the course of life and again cause disease symptoms. This is very often associated with impaired immune function such that HCMV is considered one of the most important pathogens in immunosuppressed patients (e.g., transplant patients). In addition, this virus can cause an infection of the unborn child during pregnancy, the permanent and z.T. causing serious damage to the child. In our research, we characterize molecular details of virus entry into the target cell (AG Sinzger →), viral gene expression (AG Stamminger →) and virus morphogenesis (AG of one →) to develop new antiviral therapies and medications. In addition, we deal with open questions of viral pathogenesis and the analysis of viral resistance mechanisms (AG Michel →) .

Human cytomegalovirus (HCMV) remains an important cause of mortality and morbidity in immunocompromised patients seeking as transplant recipients on immunosuppressive therapy. Furthermore, HCMV is the most common cause of intrauterine infection which can lead to sensorineural hearing loss and mental retardation. Although progress in the diagnosis of HCMV infections has led to improved therapeutic strategies, treatment of HCMV induced disease suffers from the toxicity of the currently available antiviral drugs. In addition, in patients where longer therapy is necessary the emergence of drug-resistant viral strains is frequent. Therefore, the development of novel antiviral drugs is urgently required in order to improve the therapy of HCMV infections. Thus, one of the important aspects of our laboratory is the characterization of molecular events that can be used as targets for new antiviral strategies. 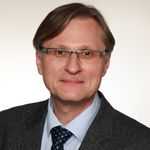 PML nuclear bodies: a cellular structure that mediates intrinsic immunity against viruses. Microbial infections are not only controlled by innate and adaptive immune mechanisms but also by cellular restriction factors. Unlike the innate and adaptive part of the immune system, that are called pathogenic-induced signaling pathways in the cell, serving as a front-line defense. Our laboratory investigates whether or not a subnuclear structure, termed PML nuclear bodies (PML-NBs), contributes to the resistance of cells against herpes virus infections. PML-NBs are dot-like structures of the cell nucleus, that are defined by the distinct accumulation of specific cellular proteins like PML, hDaxx, Sp100 and ATRX (Figure 1). During the last ten years of our laboratory could show that it acts as a cellular factor by inducing a silencing of viral gene expression. Moreover, our research revealed that specific viral proteins (pp71 and IE1 of HCMV) are able to antagonize this cellular silencing mechanism (Figure 1). This establishes a delicate balance between cellular defense and viral antagonism. 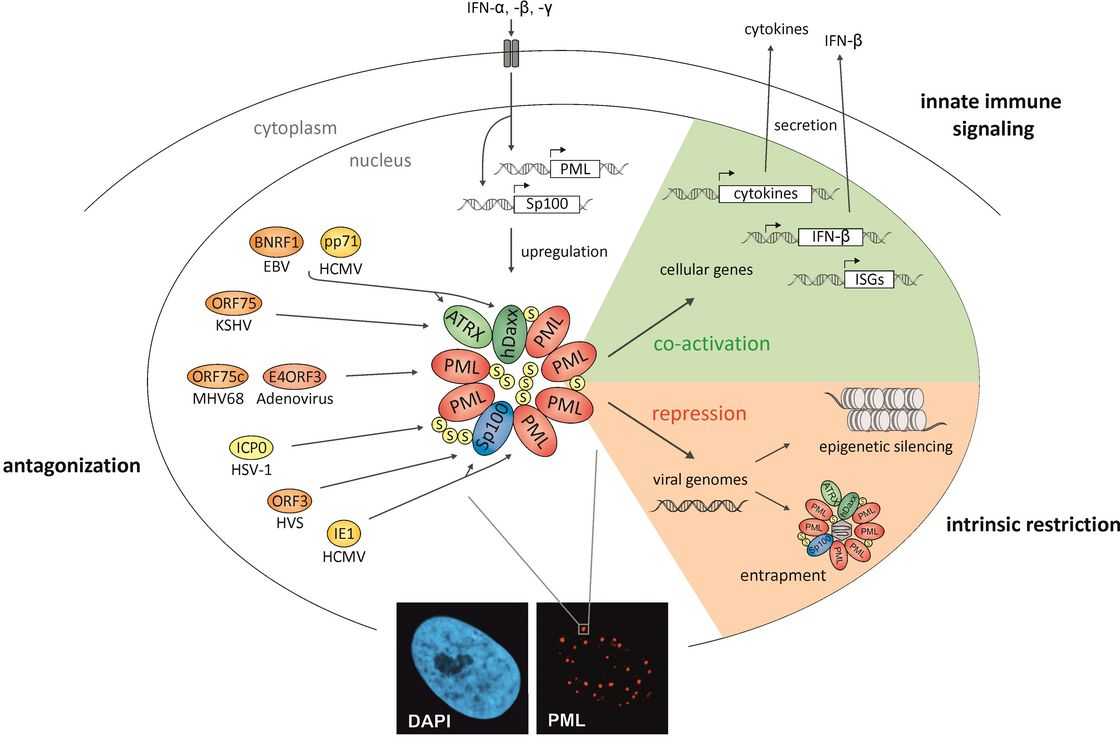 Fig. 1: PML-NBs: a cellular structure that mediates both intrinsic immunity against viruses and acts as a coactivator of the interferon response. Viral effector proteins that are known to antagonize PML NBs are shown in the left part of the figure.

Molecular mechanism of PML-NB disruption. During the last two years we could delineate the molecular mechanism as IE1 antagonizes PML-NBs. As evident from the crystal structure of IE1, this protein directly interacts with the PML coiled-coil domain via its globular core region and disrupts NB foci by inducing a loss of PML SUMOylation. We were able to demonstrate that IE1 acts via abrogating the de novo SUMOylation of PML. In conclusion, SUMOylation dynamics, IE1 expression with a SUMO mutant resistant to SUMO proteases. Interestingly, we found that IE1 expression did not affect preSUMOylated PML, however, it clearly prevented de novo SUMO conjugation. Consistent results were obtained by in vitro SUMOylation assays demonstrating that IE1 alone is sufficient for this effect. Furthermore, IE1 acts in a selective manner since K160 was identified as the main target of lysine. This is because the IE1 is so2O3-mediated hyper-SUMOylation of K160. Since IE1 did not interfere with coiled-coil mediated PML dimerization we propose that IE1 either affects PML autoSUMOylation by directly abrogating PML E3 ligase function or by making the access to SUMO sites. Thus, our data suggest a novel mechanism how a viral protein counteracts a cellular restriction factor de novo SUMOylation at specific lysine residues without affecting global protein SUMOylation.

PML nuclear bodies as coregulatory structures of innate immune responses. The evidence for an extended cross-talk between intrinsic and innate immune mechanisms in relation to PML-NBs. For instance, specific PML-NB factors such as PML and Sp100 are known to be induced by interferon (IFN) and the overall size and number of PML-NBs, respectively, increases upon IFN treatment of cells. This indicates that the restrictive function of PML-NBs may be enhanced via IFNs. However, recent evidence suggests that PML itself acts as an important co-regulatory factor during the induction of interferon stimulated genes (ISGs) (Figure 1). For instance, we observed in collaboration with PD. Dr. P. Hemmerich (Jena) that the PML protein is able to promote interferon-g (IFN-g) induced MHC class II gene expression. However, the activities of PML as a coactivator of the IFN are not confined to type II IFNs but also extend to type I IFN-regulated genes. IFN treatment of cells exhibiting a depletion of the endogenous PML protein. The PML-NB mediated stabilization of transcriptional complexes that control ISG expression. Consequently, PML-NBs may not only antagonize intrinsic antiviral defense but also immune responses to the IE1 protein of HCMV.

Signaling of HCMV-encoded G protein-coupled receptors. G protein-coupled receptors (GPCRs) are key regulators of numerous cellular processes. Thus, virally encoded GPCRs demonstrate an effective means to bypass the immune system, modulate cellular functions and redirect cellular signaling networks. Human cytomegalovirus (HCMV) encodes four GPCR homologues, termed pUS27, pUS28, pUL33, and pUL78. As pUS28 and pUL33 constitutively activate multiple signaling cascades, the functions of pUS27 and pUL78 are not fully understood, yet. To determine whether pUS27 or pUL78 displays any signaling properties, we performed luciferase reporter assays in 293T cells transduced with CREB, NFAT and NF-κB-specific reporter constructs. Our experiments demonstrate that pUS27 activates NF-κB dependent gene expression. Intriguingly, it turned out that NF-κB activation differed considerably depending on whether N- or C-terminally tagged versions of pUS27 were applied: while transfection of N-terminally tagged pUS27 did not activate NF-κB, the expression of C-terminally tagged versions strongly induced NF-κB signaling. Disruption of a putative PDZ domain binding motif by adding one serine to the C terminus of pUS27 induced high NF-κB signaling suggesting that pUS27 may be negatively regulated via a PDZ domain protein. Bioinformatic analysis revealed the existence of four putative TRAF binding motifs within the C-terminus of pUS27. Interestingly, mutation of a predicted TRAF6 binding motif led to a complete loss of NF-κB signaling. The C-terminal region of pUS27 alone is essential and sufficient for NF-κB activation, we generated chimeric proteins with either CD8 or GFP. These chimeras strongly activated NF-κB signaling independent of their localization at either the cell surface or endosomes, respectively. This indicates that the subcellular localization of the pUS27 cytoplasmic domain is not critical for NF-κB activation. Moreover, we were able to induce the canonical NF-κB pathway through TRAF6 by either ACHP, an inhibitor of IKKβ phosphorylation, or a dominant negative IκBα. Taken together, our data reveal a novel and highly complex signaling capability of the HCMV GPCR pUS27.

The UL69 of human cytomegalovirus: a viral mRNA export that is controlled by distinct post-translational modifications. The open reading frame UL69 of human cytomegalovirus encodes the multi-functional regulatory protein pUL69 which acts as a viral mRNA export factor via its nucleocytoplasmic shuttling activity and via recruitment of the cellular mRNA exporting machinery by interacting with the cellular DExD / H-box RNA helicase UAP56. We previously reported that subcellular localization and mRNA export activity of pUL69 are modulated via phosphorylation by the viral kinase pUL97. In a recent study, pUL69 was subject to additional posttranslational modifications like arginine methylation. First, we demonstrated a specific immunoprecipitation of full-length pUL69 as well as pUL69aa1-146 by a mono / dimethylarginine-specific antibody. Second, we observed a specific electrophoretic mobility shift upon overexpression of the catalytically active protein arginine methyltransferase 6 (PRMT6). Third, a direct interaction of pUL69 and PRMT6 was confirmed by yeast two-hybrid and coimmunoprecipitation analyzes. We mapped the PRMT6 interaction motif to the pUL69 N terminus and identified critical amino acids within the arginine-rich R1 box of pUL69 that were crucial for PRMT6 and / or UAP56 recruitment. In order to test the impact of putative methylation substrate on the functions of pUL69, we constructed various pUL69 derivatives harboring arginine-to-alanine substitutions and tested them for RNA export activity. Thus, we were able to discriminate between arginines within the R1 box of pUL69 that were crucial for UAP56 / PRMT6 interaction and / or mRNA export activity. Remarkable, nuclear magnetic resonance (NMR) analyzes the same α-helical structures for pUL69 sequences encoding the wild-type R1 / R2 boxes or a UAP56 / PRMT6 binding-deficient derivative, thus excluding R / A amino acid substitutions within R1 affected the secondary structure of pUL69. We conclude that the pUL69 N terminus is methylated by PRMT6 and that this critically affects the functions of pUL69 for efficient mRNA export and replication of human cytomegalovirus. Furthermore, we set out to identify phosphorylation sites within the functionally important N-terminus of pUL69 and characterized the in vivo importance for HCMV-replication. In silico Analyzes predicted the existence of 13 serines and 3 threonines as putative phosphorylation sites within the functionally important N-terminal 140 amino acids of pUL69. MS-based phosphosite mapping of immunopurified FLAG-pUL69 identified S18, S51 and T52 as highly probable phosphorylation sites in transfected HEK293T cells. CoIP analyzes revealed that combinatorial exchange of S13 + 15 + 16 + 18 to alanine abolished pUL69’s capacity to interact with UAP56. We therefore hypothesize that cellular kinases phosphorylate this serine stretch upstream of alpha-helix1 and thereby determine the recruitment of UAP56 recruitment by pUL69. By comparing the expression profiles of pUL69-mutants that carry individual or combinatorial substitutions of putative phosphosites via phos-tag-SDS-PAGE, we provide strong evidence that several serines were phosphorylated when pUL97 wildtype but not when its catalytically inactive derivative pUL97-K355M were coexpressed. Since pS46 and pS49 in alpha-helix2 are both preceding a proline, we speculated that they might be substrates for Pin1-mediated peptidyl-prolyl cis-trans-isomerization and confirmed a complex formation of pUL69 and Pin1 by CoIP experiments. NMR experiments to define the impact of phosphorylation on the structure of pUL69 are in progress. In accordance with our biochemical in vitro HB15-derived virus that carry S / T to A-substitutions within the pUL69 N-terminus. We have identified phosphosites of pUL69 which are required for UAP56 or Pin1 recruitment, respectively, and confirmed their in vivo importance for HCMV replication.