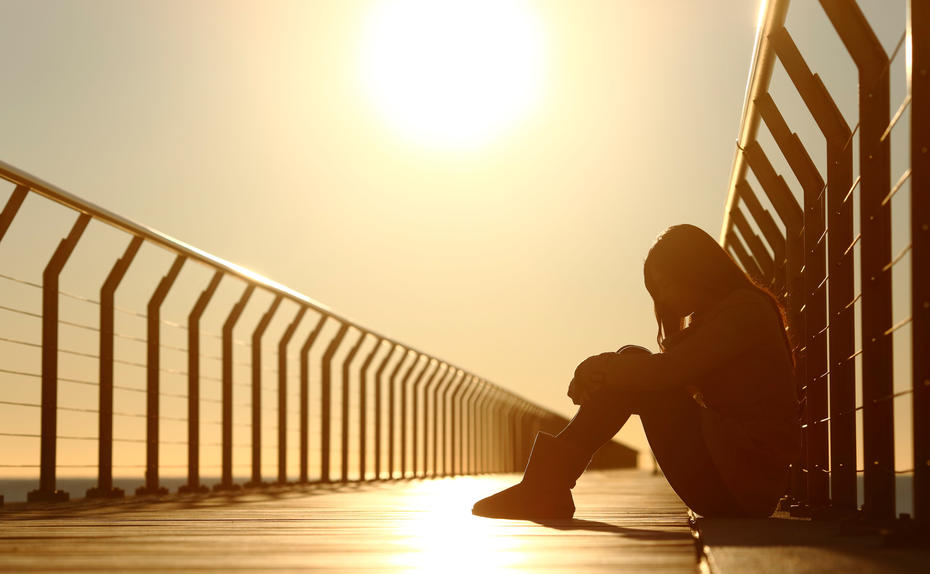 Pressure to perform, bullying, heartache: Half of all young people think of suicide at least once during their school career. How can you help them?

It’s a normal Monday morning at a Salzburg elementary school when little Maximilian * cries out to freeze his teacher: "Everything is too much for me! I don’t want to live anymore, ”says the eight-year-old. He later tells the consultant, who has been brought in, that he had considered jumping out the window – if it hadn’t been for his fear of heights. Death from the rope also came to his mind. But where should he get the rope from? He could hardly ask mom.

It is frightening when childish naivety meets such dark thoughts. And yet it happens shockingly often: When the SEYLA (Safe and Empower Young Lives in Austria) suicide prevention study was carried out in 2015 in Tyrol, Vienna, Upper Austria and Styria, a third of the 14- to 17-year-olds surveyed stated that currently suffering from depression. About the same number reported suicidal thoughts. 15 percent had even made specific suicide plans. Across the entire school career, half of the students state that they have thought of suicide at least once.

After traffic accidents, suicide is the second most common cause of death among 14 to 20 year olds, and even the most common in the 25 to 29 age group: 134 of the 1251 suicides committed in 2015 concerned people under 30 "worryingly high rate of “domestic youth-In 2009, suicides even brought a reprimand from the OECD. The situation has eased somewhat at the moment, with Austrian suicide rates in the European midfield.

In addition to bullying, mental illnesses, lovesickness and hormonal influences, the growing pressure to perform at schools and universities is an increasing problem. 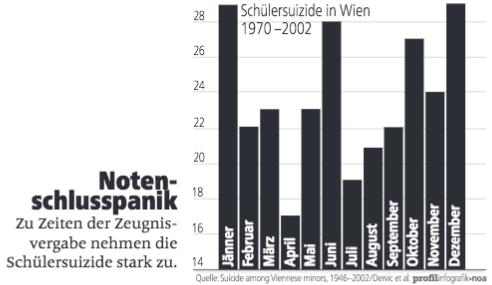 "Love has become more and more performance-oriented, “says Salzburg psychotherapist Helene Bader: "Very few children experience that they are loved for their own sake – and not for the grades that they bring home. ”Because of the trend towards small families, parents identify more and more with their children’s achievements; School success is seen as proof of successful parenthood. Through homework until late at night, tutoring, ballet lessons and tennis lessons, all the potential of the youngsters should be released – instead, the full-time program too often ends up being overwhelmed. Even unspoken expectations of parents register the sensitive children and gradually interpret the exaggerated demands as their own.

The results are excruciating pressure and loneliness. The German reports that every third student feels regularly stressed by teachers, lessons or homework "Children Barometer "survey. Similar figures can be assumed for Austria. Eating disorders, drug use, alcohol addiction, self-harm, anxiety and depression affect younger and younger age groups. Every fifth schoolchild between the ages of ten and 18 suffers from mental illnesses, as the 2013 MHAT study (Mental Health in Austrian Teenagers) by the Boltzmann Institute for Health Promotion Research showed. The increasing pressure to perform takes its toll even in elementary school age: Anna *, a busy student with a slight weakness in arithmetic, was nine when she collapsed hyperventilating in the middle of the math test. For months she had suffered from the math five in the half-year report and the constant admonitions of her teacher to finally make an effort. The therapist Helene Bader diagnosed anxiety disorders and panic attacks; Anna’s condition reminded her of that "of an animal that was hunted, hid under the table and was then kicked ”.

Parents too rarely notice their child’s suffering. On the contrary: "Stressed-out mothers often only consider themselves responsible if they scold like the teacher, ”said Bader. All too often, psychosomatic signs of an anxiety disorder such as chronic headache or upper abdominal pain are dismissed as attempts to simulate lazy school-goers. The connection between suicide and pressure to perform seems obvious: At the time of the awarding of certificates, according to the results of a long-term study in Vienna for the period from 1946 to 2002, the number of student suicides skyrocketed, followed by a vacation-related resting phase.

High school students are more affected by suicidal thoughts than students in vocational higher schools – presumably because the latter have more concrete ideas about their professional future. However, job prospects also offer little consolation if everyday school life is negatively impacted. The inhospitable climate of a Styrian HAK almost drove 26-year-old Stefan to his death as a teenager. The reluctance to go to class, depression and growing fear of failure made it impossible for the then 15-year-old to concentrate. And the deteriorating grades seemed to confirm the former one-student that he was a "Nothing "was a "Jerk ”as a teacher never got tired of attesting to him. "When I was 17, there was no alternative for me, ”says Stefan: "I couldn’t keep going to school. But breaking off would have disappointed those around me. ”

The therapist Helene Bader urges that relaxation be brought into the everyday life of the boys and that the dictation of the main subjects be abolished. "So much unnecessary suffering could be saved for the children, who are good at chemistry, for example, but riveting in math. ”

If I hadn’t had such a supportive environment, things would have turned out differently

Former HAK student Stefan survived because his mother noticed the lack of a suicidal teenager would have and reached him on the phone at the last moment. "We talked for hours and she gave me the freedom to drop out of school, ”says Stefan. "If I hadn’t had such a supportive environment, things would have turned out differently. ”

Helene Bader recommends that you always keep in touch with the children. If you withdraw, you should openly and lovingly inquire about the reasons and, if necessary, seek professional help. As the first crisis intervention, Bader advises children and young people to understand that mistakes are part of life and that they do not lose any of their amiability.

However, many children are experts in disguising their feelings – especially towards parents, who interpret increased listlessness or hermitism as typical side effects of puberty. "Does that mean we parents are just too stupid? ”Says angry Martina M., who lost her son Simon through suicide. "In the five years since Simon’s death, we’ve racked our brains a lot, but we haven’t found anything. ”

At first we were at a loss. Even doctors think that such young children do not have depression

In some cases, however, neither long-term efforts by parents nor intensive clinical treatment can change the children’s suffering. Philipp was ten years old when the depression started. "At first we were at a loss. Even doctors think that young children have no depression, ”says his mother Geraldine Niedersüß. "I am always so confused. The madness is going on in my head, ”Philipp said to his father at the age of 15. "I’ll give myself one more year. ”There were seven, marked by the diagnosis of schizophrenia, several hospital stays and three attempts at suicide. One evening Philipp came into the parents’ bedroom, grinned at the sleeping father and gave the mother a tender kiss on the cheek. Only the next day did she realize that it had been a kiss goodbye.

In addition to mental illnesses, eating disorders and suicides in the family, substance abuse is one of the biggest risk factors for an increased risk of suicide. When the gifted pupil Michael *, a trilingual math genius with a philosophical streak, was unable to finish the master’s thesis of his human rights studies in England, he began to drink excessively. Even under the care of his parents and with psychiatric help, he was unable to get his addiction problem under control: "He wanted to show that he was stronger, ”says his father. The "The AKH’s cut-down drinking program, which focuses on alcohol reduction instead of abrupt withdrawal, and which Michael had used right at the beginning of his crisis, soon saw him as "useless "and "Waste of time ". He kept withdrawing, losing his friends – until the damage seemed beyond repair: "Enough is enough, ”said the message the 26-year-old left behind on his laptop on his family last year. "I have become an incredible burden, a source of sadness, despair and the Frustration."

Despite everything, the deed came unexpectedly for the father. He regretted not looking for serious clinical help for his son. "Let me be an example for others so that they look for sufficient help early on, ”Michael wrote in his farewell letter – the reason why Michael’s father wanted to share his story with the public.

Unfortunately, the Austrian health care system is poorly equipped for such emergency situations. Although more and more children and adolescents suffer from mental illnesses, there are hardly any ordinations that treat them at the expense of health insurance. Inpatient care is also poor. Due to lack of space, minors at risk of suicide are regularly accommodated in adult psychiatric facilities – without appropriately trained care personnel. Currently, more than half of the 128 to 208 beds in the Austrian Health Structural Plan (ÖSG) are missing. Last year, 191 children and adolescents had to be admitted to adult wards. The youngest were twelve and thirteen years old.

Suicide prevention in schools should also be expanded. Because this can achieve a surprising amount. At the moment, however, it is not anchored in the curriculum and is treated differently from school to school – if at all. In the future, however, this should change: in Vienna, for example, a short film program for suicide prevention for 16 to 18-year-olds will be used from April 2017. In Tyrol, the school education program YAM (Youth Aware of Mental Health) is being prepared, which was developed as part of the suicide prevention study SEYLE (Safe and Empower Young Lives in Europe) with 11,000 young people from eleven different countries between the ages of 14 and 16 has proven to be one of the most successful ways to mentally empower students. In role-playing games, children simulate various stressful situations. "In this way, they learn to think about pressure, family problems and depression, to recognize symptoms in themselves and others and to get help, ”says project manager Raphaela Banzer from sucht.hilfe BIN: the risk of suicidal thoughts dropped after just 12 months and attempts by YAM participants by half.

The project, which comprises five school hours, is to take place in ten Tyrolean school classes next year "spread eastwards across the country in three years, ”Banzer hopes. "It would be urgent. "