At real and in online retail there is always the Römer Eclipse child seat at a promotional price and some are sure to wonder whether the approx. € 139 is a bargain or whether it is better to stay away from the offer. The product information on Romans Britax Eclipse from real, – are poor as always, so we did some research and found the following:

The child seat belongs to group 1 and is for children suitable from 9kg to 18kg, i.e. from 9 months to 4 years. Britax Römer describes the child seat itself as follows:

“ECLIPSE is the ideal solution if there is only limited installation space available for a child seat (i.e. for 3-door cars or small cars). The forward-facing child seat with optimal side impact protection can be adjusted in several sitting positions without disturbing your child. ” 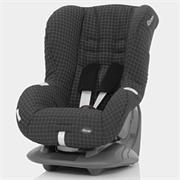 Interesting on Roman Eclipse is above all the fact that the child seat is not only with the normal belt, but also with the lap, i.e. can be used on the middle seat. It is therefore also suitable as a second seat. In a twin forum it was reported that it is very narrow and – depending on the other two seats and of course the car model – also fits between 2 child seats, so very practical for Parents with 3 children. The seat may only be installed in the direction of travel.

reviews: Unfortunately we could not get a current German test report from the ADAC or the Foundation, endowment Find a product test for the Römer Eclipse car seat, but the model has been found in English-language magazines such as “Baby & Pregnancy ”received the Best Buy and Best Value awards in 2007 and 2008, you can read about this here.

Update 1/30/2010: in the meantime there is finally a test of the Römer Eclipse by the magazine Automotorsport. There is the child seat as satisfactory and recommendable to a limited extent rated. Compared to the rest of the test field, the Eclipse is one of the better models in the Auto Motorsport 1/2010 test.

There are the King Plus and Safe Plus models in the same “weight class” from Römer, both of which were rated good by the ADAC. In our experience, the Britax-Römer baby car seats and child seats are always very well made, so you certainly won’t buy any no-name scrap here.

reviews: the experiences and reviews of customers at Amazon are mostly positive.

Price: the 139, – Euro in supermarket offers like Real (as of 2010, no guarantee, prices can change in the meantime) are comparatively cheap, the MSRP is 159, – Euro, which is also due to the fact that this model is rarely offered in Germany.

alternatives: Comparable models in Group 1 of 9-16kg without Isofix are usually significantly more expensive. With a little luck you can get the "next better" Römer, the well-tested (Stiftung Warentest 11/2008) Römer King Plus e.g. cheap at baby-markt or also good Kiddy Infinity Plus from 120, – Euro. There are new EU guidelines for child seats this year, so that many manufacturers are now separating from old top models. If you pay attention to warehouse sales and discontinued models, you can make a bargain here. However, it is advisable to find out about rear-facing child seats (reboarder) in this child seat group beforehand.

Saving Baby Conclusion: the Römer Eclipse is a simple branded child car seat from Britax Römer at an affordable price with only satisfactory test results (in the test of Auto Motorsport 1/2010). The Römer Eclipse comes without Isofix, but is well suited for fastening with a lap belt and the middle seat on the back seat. The smaller width makes it suitable for several children and little space. If space is tight, the Eclipse is worth considering – otherwise there are better child seats for this age group with little extra charge.