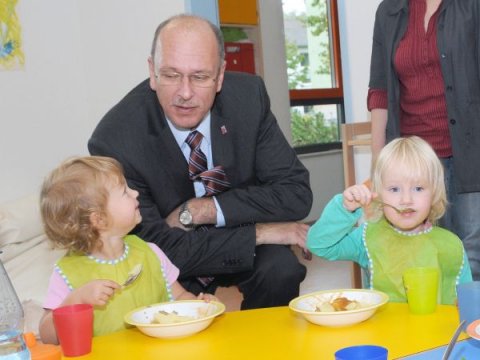 At a press conference in the Hessian state parliament, the Hessian family minister Stefan Grüttner called the event a "success all the way for the children and families in Hesse."

New basis for debate about childcare

The family minister said the "outstanding results" of the meeting were the "highly constructive climate" and "matter-of-fact debates". “This is by no means a matter of course for representatives of such different interests and is new in form. I mean, we have all put the debate about childcare in Hessen on a new footing that we can now build on for the future. I would like to thank all those involved very warmly. ”Grüttner emphasized that the new start-up funding in the country is very well received by providers who expand their childcare services for children under the age of three after the March 1st deadline and can therefore only register places later bumped.

At the invitation of the Minister of Family Affairs, representatives of the local umbrella organizations, the churches, the League of Free Welfare in Hesse, parents ‘initiatives, trade unions, entrepreneurs’ associations and representatives of childcare and children with disabilities met in the Hessian State Chancellery for the round table on childcare on Wednesday. “We were more interested in covering the broadest possible range of sponsors, associations and interest groups than in mapping the landscape equally. In this context, we were able to enable a very constructive exchange of experiences, ”said Grüttner. The event was moderated by Werner D’Inka, co-editor of the Frankfurter Allgemeine Zeitung. The focus was on five different aspects of childcare in Hesse: the status and needs of expanding childcare for children under three, the evaluation of the Hessian Child Promotion Act, language support, education and upbringing plan and quality development, day care for children and securing skilled workers in childcare.

In advance, the participating institutions received questionnaires on various subject areas. “From the feedback, it can be seen that there is no uniform picture for Hessen in childcare. Regional and carrier-specific differences are particularly noticeable when it comes to expanding further nursery places and when it comes to recruiting skilled workers. Solutions must be found here that are tailored to the situation on site, ”says Grüttner.

An overview of the topics

In conclusion, Grüttner emphasized that he had got the impression that the "craft-based and successful work of the Hessian state government in the ambitious expansion of the U3 in 2013 and the massive use of funds of 425 million euros on average per year convinced most of the actors" that it " We are serious about doing a good job here for the families in Hessen. Because it is a matter close to our hearts and it applies: Hessen has a sense of family. "