What is important if you want to marry Russian women!

1. Why are Russian women and Ukrainian women looking for a partner abroad at all, e.g. in Germany?

We have already dealt with this topic in detail in our article “About Ukrainian women”. Another important reason that has not yet been mentioned is demography, more precisely, the statistical distribution of men and women in Russian and Ukrainian society. Take a look at this graphic:

The countries in which there are more women than men are marked in blue. Red the countries where it is the other way round, i.e. more men than women. The deeper the blue, the greater the imbalance. Do you notice anything? Exactly, Russia and Ukraine and some other countries of the former Soviet Union have the greatest gender imbalance worldwide. In Russia and Ukraine there are almost 116 Russian women for every 100 men. This is unique in the world. In the country comparison of gender distribution on Wikipedia, Russia, Belarus and Ukraine are in the top positions with just under 87 men per 100 women.

What does this mean for Russian women looking for a partner? It is much more difficult for these women to find a man than for women in Western Europe, the USA or Southeast Asia, for example. No matter how attractive, pretty and educated women are. Statistically, a significant number of Russian women have to be left behind. So it is perfectly normal for women from Russia or Ukraine to meet in foreign countries Looking for the right partner through a dating agency, far from all clichés, it is simply a statistical consequence.

– Flower theme: As for every woman, flowers are always a welcome gift for women from Russia. In general, gifts for Russian women but also for other women from Eastern Europe are a sign of attention and respect. The value of the gift is less important, but on the willingness to want to give anything at all. Back to the flowers: if you give flowers to a Russian woman and the woman’s family is present, you should also give the mother, grandmother etc. Also make sure to always give an odd number of flowers and not, as is usual with us, half or a dozen flowers, because flowers in this number are given away at funerals in Russia and that is really the last thought of their Russian one Woman looking at the bouquet of flowers.

– Christmas: in Germany the Christmas / New Year usually ends around January 2nd. In Russia and Ukraine starts this time only around December 30th and ends in mid-January around January 14th. The Orthodox Christmas is celebrated on January 7th. In Russia and the Ukraine, January 1st is about as important as the 24/25/26. December, except for the religious component. A New Year tree (Yölka) is decorated and it is not Santa, but grandfather “Frost” and his granddaughter “Snowflake” come. Important to know: public life essentially rests until January 15th as a whole country and many women then visit relatives or go on vacation. You should consider this if you are planning a trip to Russia during this time.

– Women’s Day: International Women’s Day (March 8th) plays a major role in all states of the former Soviet Union and in Eastern Europe. On this day men give flowers to women and congratulate and congratulate them on this day (Vosmoye Marta). If there is an equivalent for this day in the West, it is probably Valentine’s Day with us.

– Kisses: Never kiss a Russian or Ukrainian on the forehead, this kiss is used to say goodbye to funerals in Russia. If you want to greet friends and relatives, you kiss each other three times on the cheeks. When you meet someone for the first time, However, if this is not expected, people are greeted with whom you are in closer contact. 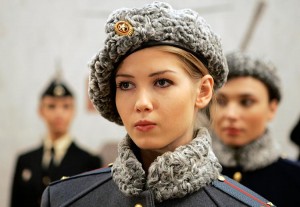 It is important to remain a realist on this issue. A 60-year-old man shouldn’t be so naive and believe that a Russian in her twenties would be a good choice for him. Russian women are usually looking for a man who is older than themselves, they are looking for a man who has already achieved something in life, who is experienced and willing to take responsibility. Western men are often the ideal choice for a Russian woman because they have often been married in the past, are attentive, and are usually in their twenties, thirties or forty. It is not uncommon in Russia to see a man in his late thirties with a young girl. Even if this is encouraging for many men who are looking for a younger woman, it is important to have realistic expectations. Conversely, it is also true that women rarely accept a younger man.

How do Russian women judge their own age??

Russian women see their age much more critically than women in the West. A woman in Russia has her prime from the early twenties to mid-twenties and is usually married until the age of 30 with children. An unmarried Russian over the age of 25 is still viewed somewhat “obliquely” in Russian society, because in the Soviet era Russian women were encouraged to marry and have children up to the age of 22. Women from Russia over 30 often feel older than they actually are. Many of the women over 30 that you find at an international dating agency are often divorced and have children. This also seems to be the case with women from western countries, with one difference: Russian women typically look 10 years younger than they actually are. It’s not uncommon for a Russian woman in her forties to look like a 28-year-old or even younger.