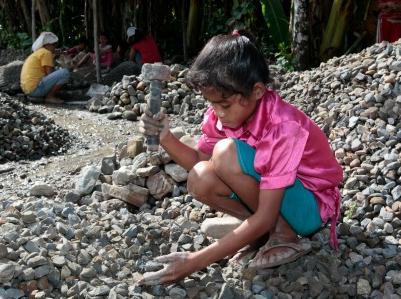 According to the ILO, the highest number of child workers is found in Africa with 72.1 million children, followed by Asia and the Pacific with 62 million children. (Photo: (c) Kindersothilfe e.V. / Christian Herrmanny)

The latest figures from the International Labor Organization (ILO) in September 2017 make the worldwide extent of child labor clear: in the age group between five and 17 years are 152 million children affected.

According to the ILO, the highest number of child workers is found in Africa (72.1 million children), followed by Asia and the Pacific (62 million children), the American continent (10.7 million children), Europe and Central Asia (5.5 million Children) and the Arab states (1.2 million children). It also says: "An estimated one third of children between the ages of five and 14 who do child labor do not go to school. 38 percent of children of this age are in dangerous jobs and almost two thirds of them aged 15-17 years work more than 43 hours a week."

The main area of ​​application for child labor is agriculture, in which a good 70% of all children have to toil, followed by the service sector, in which a good 17% are employed (wholesale and retail, hotels, restaurants or domestic services). Just under 12% work in industry. The children’s rights organization Terre des Hommes speaks of 72 million girls and boys doing dangerous work, for example in mines, quarries or on commercial plantations. Many worked at night or worked too long hours.

Once a year the "World Day Against Child Labor" on June 12th to the scandal. Several organizations from Germany – including especially Ecclesiastical or Christian – not only try to raise public awareness of the problem, but also provide practical help for those affected with their local projects. This applies to the Catholic relief organizations Adveniat or Missio as well as for "bread for the World" or the Kindernothilfe on the evangelical side.

"The cause of child labor can almost always be seen in family poverty", Christian Herrmanny, deputy press spokesman for Kinderothilfe – a Christian association based in Duisburg: "The parents do not choose that the children have to go to the quarry or be sent to the mine because it is so beautiful, but the families are really in need. They don’t know how to survive the next few days and then the only way to get through the day (.) Is by having the children work with the parents."

The aid organizations largely agree that education is an important key to freeing children and their families from the vicious circle of child labor. Christian Herrmanny says: "We both have to free the children from this heavy exploitative work and, on the other hand, we have to provide parents with income prospects so that they no longer have to send the children to work, but can enable them to go to school (…)."

The Christian Initiative Romero based in Münster takes a differentiated approach. Together with Terre des Hommes, the North-South network of the DGB and the child rights expert Prof. Dr. Manfred Liebel founded the association in 1997 "ProNATs". The abbreviation stands for "Per los Niños y Adolecentes Trabajadores" (For working children and adolescents). On the website of the Christian Initiative Romero it says: "ProNATs is connected to the movements and organizations of working children and adolescents in Latin America, Africa and Asia. Together with them, ProNATs campaigns against every form of exploitation, exclusion and ill-treatment, without, however, wanting to outlaw child labor."