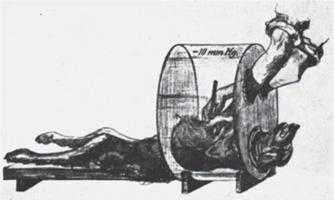 Who was Ernst Ferdinand Sauerbruch??

Sauerbruch was the leading German surgeon in the first half of the 20th century. He became known in 1904 at the 33rd Congress of the German Society of Surgery. There he presents what he developed "Differential pressure method" This provided the basis for surgery on the open chest. At that time the patients floated in a Toraxoperation, due to insufficient breathing, in acute mortal danger.

03. July 1875 Ernst Ferdinand Sauerbruch was born in Barmen. After the death of his father Sauerbruch grows up with his grandfather in poor conditions. Sauerbruch’s mother and sister enabled him to study medicine.

1895 – 1902 He studied at the Universities of Marburg, Jena and Göttingen. His practical medical skills he gained in Berlin, Erfurt and Kassel.

1902 he received his doctorate in medicine. He then went to the Surgical University in Breslau for a few years as a volunteer doctor.

1904 on April 6, Sauerbruch introduced his vacuum chamber, too "Sauerbruch chamber" called an open Torax operation with success in public before.

1905-1915 Sauerbruch becomes surgical senior physician at the University of Greifswald. In 1907 he moved to Marburg as head of the Polyclinic and primarily researched the possibilities and limits of organ transplantation. In 1910 he was appointed professor at the Zurich University Hospital and became director of the Surgical Clinic and Polyclinic of the Cantonal Hospital of Zurich. 1914 begins the First World War, Sauerbruch volunteers and becomes advisory surgeon of an army corps.

1915 Sauerbruch is on leave from the German government and returns to the Zurich University Hospital. Here he is dedicated to the development of "Sauerbruch – hand" for war disabled. With its novel arm and leg prostheses Sauerbruch created the first usable survival aids. This richly-structured, surprisingly flexible prosthesis secured him a popularity that only a doctor could seldom obtain. In 1916 he publishes the first part of his book: "The arbitrarily movable artificial hand".

1918-1927 Sauerbruch receives the professorship of surgery at the University of Munich. He develops the named after him "Tipping plastic". After removal of e.g. cancerous femoral bone transplants the healthy lower leg bone into the acetabular cup. The lower leg is replaced by a prosthesis.

1920 – 1925 Publication of the two-volume work "Surgery of the thoracic organs" and the second part of "The arbitrarily movable artificial hand".

1928-1949 Professor of Surgery at the Berlin Charité and Head of the Surgical University Clinic. He succeeds as another sensational surgical success, the first elimination of a bulge of the heart wall after an infarction. (Cardiac aneurysm). Over the years Sauerbruch has been the publisher of the magazine "New German surgery". After the end of the Second World War, Sauerbruch participated in the reconstruction of the Berlin health care system. At the founding of the "Surgical Society in Berlin" he is elected chairman.

1949-1951 In December, he submits a request for retirement. Despite age-related impairment of his surgical safety and mental mobility, Sauerbruch continues to operate. 1951 becomes the autobiography dictated by Him "That was my life" released.