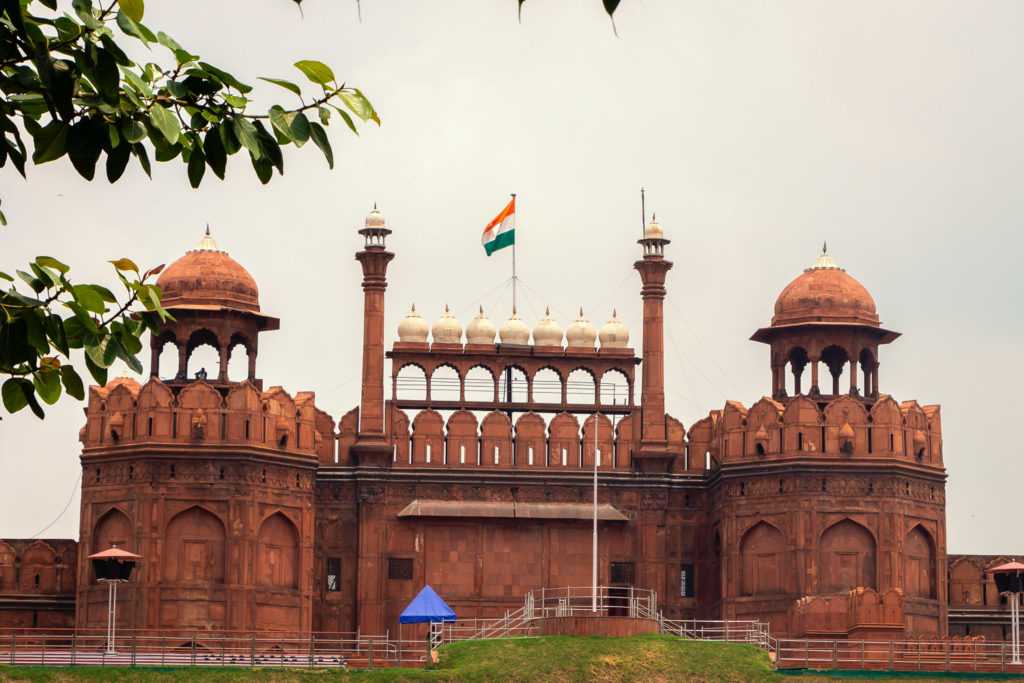 The top 10 attractions in Delhi – you should not miss!

Hardly an India trip leads past the capital. Delhi has a rich history and therefore has much to offer travelers. In this article, we introduce you to our top 10 attractions in Delhi. Have fun discovering the colorful metropolis!

Our tip: If you mark the map with the star, you’ll have it with you everywhere in your Google Maps app!

Delhi is extreme and many travelers who come to India for the first time and go on their own are shocked by the conditions in the country. For a more comfortable start in India and a culture shock, it may be wise to start a guided tour of Delhi.

Old Delhi has its roots in the time of the Mughals, who used the region around the Red Fort as the capital of their empire. This part of Delhi reflects the typical Indian cityscape.

One of Delhi’s most important attractions is the mighty fortress and palace complex of red sandstone from the Mughal Empire. After crossing the Lahore Gate and leaving behind the bustling streets of Old Delhi, you find yourself in an oasis of tranquility.
You can explore the fort: a three-story drum house housing the Indian War Museum, the public lobby, Divan-e-Am, the marble palace Mumtaz Mahal, the private palace of Khas Mahal, the Palace of Colors Rang Mahal, Royal Baths, the Perl Mosque and some pavilions.
Unfortunately, many of the buildings are closed and no longer accessible. Although it has been a UNESCO World Heritage Site since 2007, the lack of maintenance on the part of the Indian authorities means that the magical splendor is being lost more and more. Nevertheless it is worth a visit! We took an audio guide and were able to look at everything and be explained in peace.

The largest mosque in India was inaugurated in 1650 by the Mughal Emperor Shah Jahan, who also built the Taj Mahal and the Red Fort. It took six years for the massive red sandstone structure to be completed at a cost of a million rupees.
If you have crossed the entrance gate, you are in the large courtyard. There is room for over 20,000 worshipers here!

You should visit the mosque in the morning, as non-Muslims often stand in front of closed doors in the afternoon during prayers. Remember that you wear long clothes during your visit.

Other places of interest in Old Delhi

New Delhi was built around 100 years ago during the period of British colonial rule to replace the old capital of Calcutta. It is not difficult to see European influence in the architecture of government buildings.

Renamed Rajiv Chowk a few years ago, this circular square is the hub of New Delhi. From here branch off eight arterial roads in all directions. The most well-known connecting road is the Janpath branching off to the south and leads into the government district created by the British.

Rajiv Chowk is one of the largest financial, commercial and business centers in the metropolis. Around the roundabout there are numerous opportunities for shopping.

4. The Presidential Palace and the India Gate

The large, wide boulevard Rajpath connects the government district in the west and the imposing India Gate in the east. Large green areas surround the street, which in the evening attracts many locals for picnics.

Heading west, the road leads slightly uphill. Left and right you can see the two imposing government buildings, which were built of yellow sandstone. At the end of the street is the palace-like Rashtrapati Bhawan, governed by the Indian president. Unfortunately you can not get close and have to settle for a look through the big iron gates.

From the hill, however, you have a good view over the Rajpath to the India Gate. The All India War Memorial is a large triumphal arch reminiscent of the British Indian soldiers who died in the First World War. 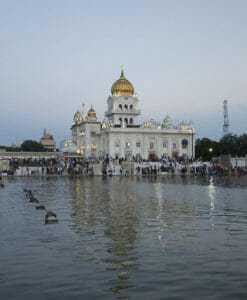 About one kilometer southwest of Connaught Place you will find this Sikh temple. Although he can not compete with the splendor and magic of the Golden Temple in Amritsar, it is still a fine example of Sikh architecture. Very characteristic are the golden domes and the typical square temple pond with holy water. From the outside, the church seems a bit inconspicuous, but as soon as you enter the temple, you get into a very special, spiritual atmosphere.

Right next to the entrance is a tourist office. There you can give away your shoes for free and borrow a headgear if you do not have one yourself.

The magnificent tomb of Humayun was commissioned by his wife and completed only nine years after his death. It is with its 43 meters towering marble dome as a prototype of the mogul mausoleums. In a museum you are shown that the Taj Mahal was built a century later according to a similar plan.

Built in 1930, this beautiful park has monuments from the 15th and 16th centuries, manicured lawns, colorful flowers, shady trees and ponds. Especially in the early morning and evening hours, the sprawling garden is a great place for a morning run or just a relaxed retreat. If you travel a lot with your camera, you will be able to spend hours in this picturesque park.

In this house lived Gandhi the last 4.5 months of his life until his assassination on January 30, 1948. In addition to impressive utensils such as his spinning wheel, countless photos, newspaper clippings and film screenings, his life is impressively presented here in a multimedia exhibition. There are similarities to Mani Bhavan, the Ghandi Museum in Mumbai, but this museum is much larger and more extensive. Here you will learn everything you should know about the “Father of the Nation”. Bring your time! 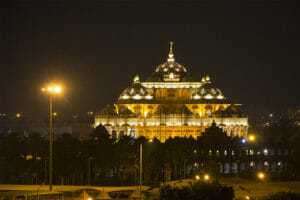 Swaminarayan Akshardham is a unique center for Indian culture. You can imagine it as a kind of Hindu Disneyland for Indians. At the heart of the 40-acre complex is the magnificent Akshardham Temple, built of red sandstone and white marble. The decorated outer wall consists of over 200 sculptures. Inside the building you will find, among other things, a large gilded statue. The entrance to the temple is free.

There are more exhibitions and attractions on offer but you will need to buy tickets. Among other things, you can visit:

Photography is prohibited throughout the area. On your arrival you have to fill out a note with your name, address and telephone number. You can not stop storing all your electronic devices along with your backpack at the baggage claim.

Then you line up with the queues. Note that you have really given everything before and only have the things that are allowed inside. After the people control you are finally in the temple complex.

In the southeast of Delhi is one of the rare, extraordinary Bahai temple in the form of a lotus flower. Nine gates on all sides symbolize openness to followers of different religions.
In the well-kept gardens and in the very simple kept temple itself you will find the peace from the hustle and bustle of the city. Especially worth the visit in the evening just before closing. Then the rush is not quite as big and when the light changes, the temple really comes into its own.

Other places of interest in New Delhi

Here you can stay overnight

As accommodation I can recommend the Zostel. This hostel in the city center is a great place to get in touch with other India travelers. The double rooms are spacious with air conditioning, TV, desk and private bathroom. The dorms are not too tight; mostly with private bath and you have a large compartment where you can include your complete backpack. And best of all: In all areas (also in the rooms!) You have free, fast Wi-Fi available.

Apart from the Zostel, the following accommodations are also very popular with travelers:

Accommodations of the higher price category:

Accommodations of the lower price category:

Otherwise you will find more nice places to stay with the help of this search mask. You can also narrow down the selection with many filters (such as location, features and price) to quickly find the best accommodation for you.

Did not find it? Then check AirBnB and get a 30 € discount for your first night.

Our accommodation, the Zostel, was within walking distance of Central Station and New Delhi Metro Station. That was very convenient! With the Delhi Metro you can easily reach the main attractions of the city and the annoying bargaining with taxi and riksha drivers is totally superfluous.

Do you still have questions? What would you look at in Delhi anyway? We are looking forward to your comment!