1816 Joseph Mohr wrote the text of in Mariapfarr in Lungau "silent Night!" in the form of a poem.

1818 "Silent Night! Holy Night!" will be sung for the first time on Christmas Eve in the St. Nikolaus Church in Oberndorf near Salzburg by Franz Xaver Gruber and Joseph Mohr. 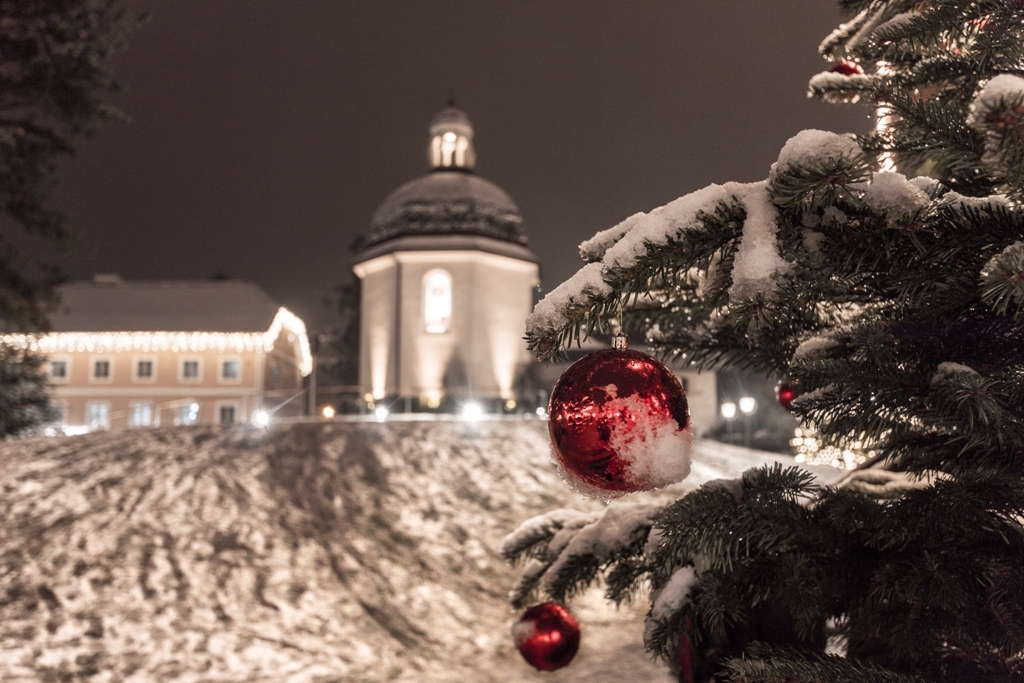 Sung for the first time – Oberndorf near Salzburg, 1818

"It was on December 24, 1818, when the then auxiliary priest, Mr. Josef Mohr, handed over a poem to Franz Gruber, who was also the schoolteacher in Arnsdorf at the newly built parish of St. Nicola in Oberndorf (at that time also a school teacher in Arnsdorf) Melody for 2 solo parts collects choir and wants to write for a guitar accompaniment." – this is how Franz Xaver Gruber described it on December 30, 1854 in the "Authentic cause" the story of the origin of the Christmas carol "Silent Night! Holy Night!". On December 24, 1818, Gruber presented his composition to the music-savvy Mohr. Since he liked the song, it was sung as part of the Christmas mass. Mohr sang tenor and took over the accompaniment with the guitar, Gruber sang bass. The song took place among the Oberndorf population (mainly Salzach boatmen and ship builders) "general applause".

We learn in the "Authentic cause" nothing about the motives that led to the creation of the song. One suspects that the old positive of the church was not playable and Mohr and Gruber therefore created a song with guitar accompaniment. For this first time performance of "silent Night!" there are many legends and romantic stories that embellish the story of its creation with anecdotal details.

As we know today, Mohr created the lyrics as early as 1816, when he was an auxiliary priest in Mariapfarr im Lungau. The only one found in 1995 "silent Night!"-Autograph from the The Mohr hand shows the lettering "Text by Joseph Mohr mpia Coadjutor 1816" on. The autograph was created before 1830 and its investigation suggests that the dating "1816" refers to the time of writing. Mohr’s autograph also contains the text line "Melody by Fr: Xav: Gruber" and brought the final clarification with regard to the authorship of the composition.

The emergence of "silent Night!" falls into a very difficult time. The Napoleonic Wars had ended and Europe had been reorganized at the Vienna Congress. In the course of these events, the spiritual principality of Salzburg, which had lost its independence, experienced its secularization. Part of Salzburg came to Bavaria in 1816 and the greater part to Austria. The premiere of "silent Night!", Oberndorf b. Salzburg was separated from its city center in Laufen (today Bavaria, Federal Republic of Germany) because the Salzach became the state border. The river formed the basis for the prosperity in Laufen / Oberndorf through the salt transport for centuries. Shipping, boatmen, shipbuilders and thus the whole place were facing uncertain times. During this phase Mohr came to Oberndorf and stayed between 1817 and 1819. His previous place of work Mariapfarr (1815-1817) would have suffered from the withdrawal of the Bavarian occupation forces. It is precisely from these circumstances that the text of the fourth verse by "silent Night!" special meaning. This presses size Yearning for peace.