Especially in foreign language initial lessons, simple methods and games are required to get children excited about the foreign language. A row of Play I’ve already shown for this. Now I would like to introduce you to a game that needs almost no explanations, since the game is already known to everyone: Memory – in a new and modified way that is guaranteed to be fun.

Living memory – rules of the game

The memory game requires a series of covered cards with animal pictures. The aim is to find a pair of animals and to remember under which map which animal can be seen. In English classes, the game can be used without any cards: the children become living animals! Two players go out for a few minutes. All other children get up, look for a partner and an animal – of course with the English term – from. Then the students spread out in the classroom and the two children from outside can come in. They take turns looking for two Children out and ask the animal: "What animal are you?" The child also answers in English: "I am a giraffe.“And then they have to find the second child who also has giraffe as an animal. The children take turns asking about the animals of their classmates. Points are awarded if a correct pair of animals has been found. These children then sit back in their places so that you don’t lose track.

Experience has shown that animal names are introduced early in English classes so that the game can be used early on. Difficulties in choosing partners and animals can arise, especially at the beginning. For this, I use a simple principle at the very beginning: I take memory playing cards and distribute them. So both the partner and the animal choice happens quite randomly. 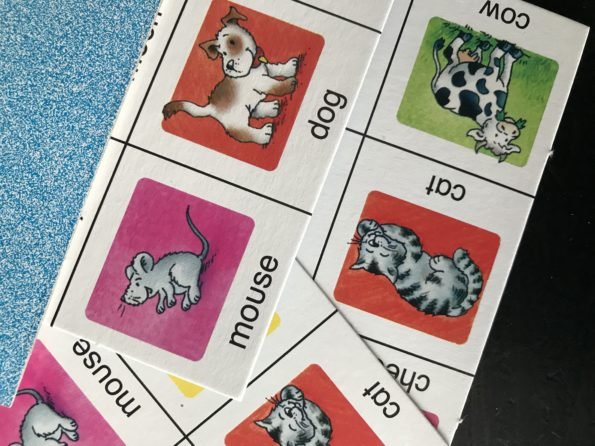 Simple memory cards make it easier to choose a partner at the beginning. (Photo: Sophie)

The free choice of animals and partners can also be taken up later. In the beginning, the focus is more on the language, the correct pronunciation of the animals and above all on the question and answer structure: "What animal are you?" and "I am a …". Over time, more animals are added and the selection of animals can be expanded.

This simple but also fun game often enriches my English lessons. Especially at the end of an hour, when the "air is out", I like to use it to motivate the students again and also to get some exercise in the classroom.