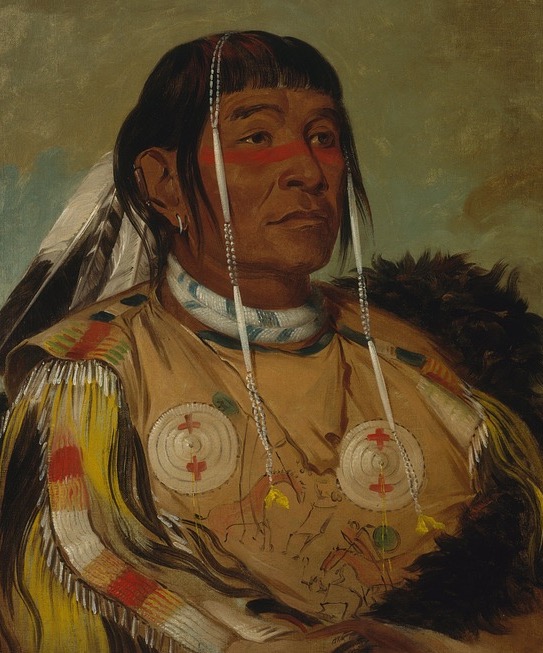 The Sioux had an increased awareness of power, and for them the importance of their nation was central. Not only the bison formed economic security, but also their raids against other strains. Above all, the capture of horses and the submission of other people was important for their survival. This was synonymous with maintaining their way of life.

The essence of Sioux society was based on waging war. Aggression against other tribes guarantees security. This brought prestige, wealth, and economic power to the tribe. The primary role of the man was not to procure food through hunting, but was geared towards war. The fact that the Sioux could afford wars against neighboring tribes almost without interruption was due to the ease of procuring sufficient hunting booty, which became even easier with the introduction of the horse. To be a successful hunter was no honor if it was not for the benefit of the tribe, but excellent warriors were considered heroes.

From an early age, the boys learned how to use bows and arrows and imitated difficult situations on the battlefield in a playful way. Boys who had reached the age of youth were often taken along as water carriers on military campaigns. They were protected by experienced adults – often a close relative. The young man was considered a lucky charm at the war enterprise and was also a symbol for the coming generation. His duties were adapted to his age and served to meet the needs of the elderly.

The adolescents were so enraged by the war that only in exceptional cases did parents have to urge their sons to take up arms. The young men were so enthusiastic about gaining fame and prestige that they brought invitations to raids to one another and sneaked out of the village at night to avoid a ban on their parents. The fathers were proud of their sons’ entrepreneurial spirit, while the female relatives cried and complained.

For the Sioux, peace meant at most an armistice, because war brought for the individual property – horses from the enemy. This led directly to prosperity, prestige and war honors. War also strengthened the economic basis for the entire Sioux society. In order to maintain prosperity, it was necessary to protect the areas with the richest bison stocks from looting and to expand the territory.

The Pawnee experienced the Sious’s determination in the summer of 1873 as they hunted bison along the south bank of the Platte River. 1,000 Sioux warriors killed almost two hundred of the intruders – men, women and children. The Kiowa, who lived in the Black Hills, were also driven out of their tribal area by the Sioux.

But the Sioux were not safe from attacks from enemies in all directions. They also wanted to gain fame and fortune and increase the prosperity of their nations. Even large camps were the target of the attacks, because the confusion during a raid could yield loot.

Women and children had to be protected every day. There was no longer any longer peace and there was no night when an attack was not possible. Constant vigilance was imperative, especially at night. The herd of horses was carefully guarded, valuable horses were flocked in front of the tent, the men slept with their weapons next to them and children were raised not to cry because this could attract the enemy. Extreme weather conditions, such as snowstorms or severe cold spells, were the safest time before attacks.

The greatest danger was when a small family group went hunting and was attacked by the enemy. When men were forced to disperse for better hunting results, the group of women and children was easy prey for enemy groups on the war path – it was exposed to annihilation.

The Sioux way of life was around 1830 strongly geared towards consumption that the economy could only be sustained through exploitation. This endorsed war that brought prosperity. The main motivations for war were retribution, defense, conquest, and robbery. The Sioux believed in their system as a people as well as a nation – they were convinced of themselves as individuals and as a group. The earliest wars were about defense and then retribution, and later there was the need to conquer and increase prosperity. The war satisfied and the Sioux warrior came in honor.

If the husband of a family was killed by the enemy, that family suffered an irreplaceable loss. It was not the group but the family who took responsibility for repaying this injustice, but they could Support of Be safe with tribesmen. Such individual feuds could lead to hostility between Indian nations. Nations at peace with their neighbors Life wanted to be careful not to harm any other tribe. Those who were out for war behaved accordingly.

The greatest war honor in a real competitive system was the coveted coup, which was actually intended for touching an enemy, but was later introduced for other brave and daring acts. For the achievement of most coups – there was a graded points system – there was competition among the warriors.

The most significant coup was achieved by the man, who of course first touched the enemy. For this act he was allowed to wear an upright golden eagle feather attached to the back of his head. whoever touched the same enemy as second came to bear an eagle feather tilted to the left. The third had the right to attach a horizontal eagle feather to the back of the head. The fourth and last one was the bearer of a vertically hanging buzzard feather. Another three springs were used to count the coups achieved. Coups were achieved in both a man, a woman and a child. The merit was to touch an enemy but not to kill them – the close contact meant courage. If a warrior killed an enemy with a bow and arrow, but four coups had previously been obtained on the same enemy, the shooter went away empty-handed. The coup – the enemy’s touch – could be carried out either with the hand, with the bow, with the lance or accessories of his covenant such as rattles or whips. Each coup was later summoned and testified. It was bad luck and shame if an enemy could land a coup on himself.

For the killing of an enemy in close combat, a red hand was painted on the clothes or on the horse as a coup symbol. If you saved a friend in battle, your clothes could be given a cross. The one who got a friend on his horse out of danger received a double cross. Red vertical lines on the leggings meant that you were wounded, as well as red colored coupe feathers. If the horse was wounded in the fight, it was shown by notched feathers. For the discovery of the enemy, the scout received his honor in the form of a black feather, the flag of which was detached to the tip. Horse theft was a special act of war, with which the man obtained economic property. For each captured horse, a hoof was painted on the leggings or the coupe feather or on the horse in the appropriate color of the animal. He was also able to express his wealth of horses with a small rope on his belt: if he had captured less than ten horses, he only wore the rope – and with more, a small moccasin. This symbolism could vary slightly from group to group of the Sioux. All that could not be considered bravery was cowardice. It was better to die in a fight or battle. This meant an enormous psychological burden on the individual. Medicine men could create protective war spells – so-called wotawes – in order to come closer to the required ideal.