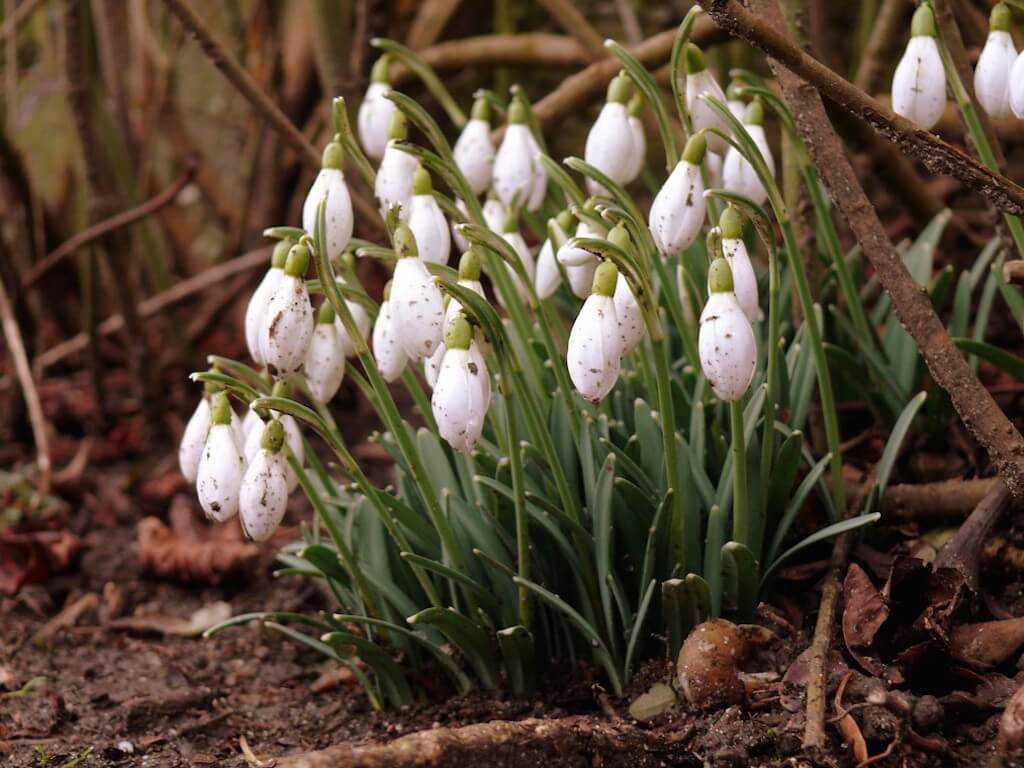 From January, the time of the Galantophiles starts again. Galanto-what? Yes, that’s right, for the lovers, collectors and breeders of the snowdrop, there is a special term.

And who invented it? The English, who else! From January to March in the UK – and especially in England – there is a real hype about the small, white winter flower. Similar to the bluebells in spring, whole carpets of snowdrops dive English gardens and parks into a sea of ​​flowers, only that it is not blue but primarily white. What’s up with the snowdrop cult in England and where to go on snowdrop tour in the UK: the ultimate snowdrop guide for the UK.

This question is not so easy to answer, because THE snowdrop does not exist. You can not even say exactly how many species and varieties there are, because depending on how strict the differentiation criteria are, the count is different. However, one assumes a minimum of 20 types of snowdrops and over 400 varieties.

The snowdrop belongs to the family of the amaryllis and has three green leaves and a single, white flower that hangs down with its head down. The Galantophiles look more closely here and recognize a variety of differences between the different snowdrops, be it in the shape of the flower, be it in the colors and shades or in the height of the plant. Depending on the species, the snowdrop season starts in October and lasts until April.

Where does the name Schneeglöckchen come from??

The botanical name “Galanthus” is a composite of the Greek terms “gala” (milk) and “anthos” (flower). The common snowdrop, as we usually know it, is called “Galanthus nivalis”, literally translucent snow-white milk-flower. Another known species is “Galanthus elwesii”, the Turkish snowdrop, named after the Englishman John Elwes, who discovered the flower in Turkey and brought it to England.
Incidentally, the snowdrops in the English language are called “snowdrops”..

How did the snowdrop hype start in England??

Galantophilia is still a new phenomenon in England. It was British soldiers who brought snowdrops from the Crimean War in the mid-19th century. Because these were different, larger – and in the opinion of many more beautiful – than the native species, English plant experts became aware of it. Especially thanks to the botanist Edward Augustus Bowles, that the Galanthophilie was established. So much commitment is, of course, appreciated, and therefore the snowdrop discovered in the meadows of his mansion in north London was named after the.

The hype around the snowdrop has been unbroken since the middle of the 19th century. Professional and hobby breeders, collectors and fans of the little white flower travel regularly in the cold season to the UK to pay homage to the snowdrop. In addition to snowdrop trips, there are conferences, seminars, auctions and exhibitions. The Galantophilie is not a cheap Passion: for very special snowdrop change ever up to 1,800 euros for a plant owner. Cheaper copies are available but already from 5 euros.

The cult of snowdrops sometimes has religious features, and as in any conspiratorial community there is also a guru in galantophilia. The gardener Joe Sharman is the snowdrop pope, with a collection that is second to none and an annual gala, whose visit is the dream of every snowdrop fan. But Mr. Sharman not only collects, he is mainly known for his breeding – including the probably best snowdrop named “Primrose Warburg”.

The snowdrop flower is a real event in the UK and especially in England. From January, gardens, parks and mansions will be hosting snowdrop hikes and tours through the vast white-green flowerbeds.
The small town of Shaftesbury in Dorset even has its own “Snowdrop Festival”, with exhibitions, shop talk, afternoon tea and extended meals.

At least as famous for their snowdrops are Colesbourne Park in the Cotswolds and the gardens of the Anglesey Abbey, nine kilometers from Cambridge. Incidentally, a famous descendant of John Elwes honors his heritage and, with Colesbourne Park, is one of the most beautiful places to experience the snowdrop bloom in England.

Let’s go snowdropping: the most beautiful places for snowdrops in the UK

The best time to see snowdrops in the UK is between January and March. Snowdrop walks and events are mainly in England, but now also in Wales, Scotland and Northern Ireland.

For more locations in the UK, snowdrop tours and events, visit the National Trust website.