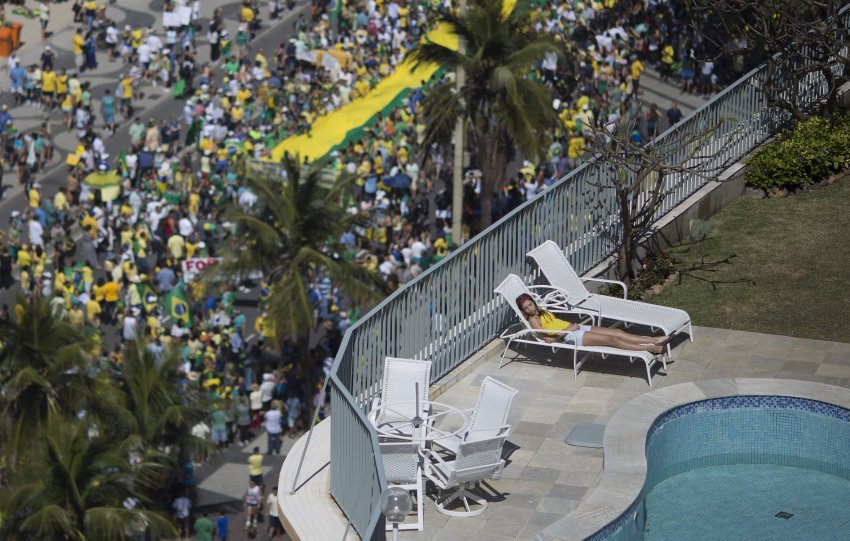 Brazil is divided: rich and poor, black and white, north and south. How big the differences are can also be seen at the country’s universities.

Acácio is looking forward to the Olympics. Looking forward to the athletes, the competitions, the festive mood in his country. And that it won’t be Dilma Rousseff who opens the games on August 5 – the hated politician who was suspended as president in May this year after five years of reign.

Acácio Dorta de Souza Neto, 20 years old and an economics student in São Paulo, helped Rousseff to leave. He and many of his fellow students demonstrated for weeks in the streets of their hometown, they went out on Avenida Paulista, the central axis of the city. It was the biggest protests in years, and it was one reason that Rousseff had to hand over her official duties to her deputy.

"Dilma was not good for Brazil", Acacio scolds. She made many bad decisions and misused government funds. "So she had to go."

Acácio is a member of the "Movement for a free Brazil", whose heart beats in a student barrack in São Paulo: bearded young men are sitting in front of laptops, the walls are scribbled with felt-tip pens and sprayed with graffiti, banners, megaphones and Guy Fawkes masks are stored in cardboard boxes. The suspension of Rousseff was a milestone for the movement, but it was their work "far from over", says Acácio.

Brazil is in crisis – politically, economically and morally. The economy shrank by four percent last year, and 11 million people are unemployed. There is hardly a politician who is not in the size Corruption affair involving the semi-state oil company Petrobras. And the country is deeply divided: rich and poor, north and south, black and white.

The country should and must change, say Brazil’s college students. But they don’t agree on what the new, different Brazil should look like: the student body also has a deep rift.

The student and the "Movement for a free Brazil" want more market and more freedom, they want to prevent the country from becoming a second Venezuela, whose socialist government can no longer even guarantee the food supply for the population. But there are also tens of thousands of students who see it very differently than Acácio and his liberal allies.

One of them is Marielle Franco, a sociology student in Rio de Janeiro. The 35-year-old grew up in the poor district of Maré, a juggernaut with almost 200,000 inhabitants in the greater Rio de Janeiro area. The favela is considered one of the most violent in the city. Marielle felt a gun on her head more than once. She says: "The residents of Maré are threatened twice: by the police – and by the dealers."

A few days ago, Marielle submitted her master’s thesis, "at last", as she says. It is thanks to Dilma Rousseff’s party that people like her are now able to graduate from university. Before that, only the best of the year could qualify for the university, and this was practically impossible for young people who could only attend a public school due to lack of money. Almost exclusively applicants who had attended expensive private schools – and very few poor and dark-skinned students – made their way to university. It makes sense that there is a quota system for them, but Acácio and other middle class students still reject it. Acácio grew up in the rich south of the country, his parents own a coffee farm and pay high taxes. "I am against the quota because everyone should be judged on their abilities", he says.

In São Paulo, many think like him who city is the country’s economic center. But Acácio also knows the other side: Last year he was still studying engineering in Rio de Janeiro. The students there are very left-wing, Acácio says, "much too left" for his taste. Courses were always canceled because the university was on strike. Fellow students would have threatened him: "My opinion didn’t suit them." At some point he was fed up, stopped his studies and went back to São Paolo. There he also works in a company that does financial analysis.

For Acácio, the solution to most of Brazil’s problems lies in the private sector – Marielle thinks very differently, she wants more instead of less state. In addition to university, she works for an organization that works for the weak in society, such as the victims of evictions. The state continues to do far too little for the poor – and major events such as the Olympic Games would be used to transform the country according to the interests of private investors. "A lot of money is spent on the Olympics, but 80 percent of public schools have no sports fields", complains the student. No, says Marielle, she thinks differently from fellow student Acácio: she cannot look forward to the Olympic Games. She rejects it.