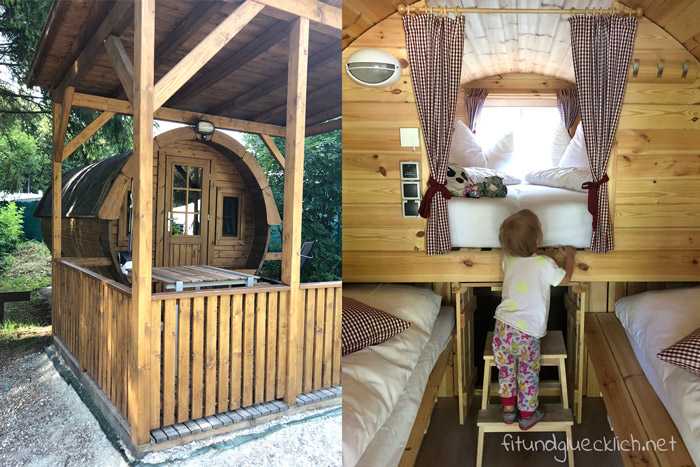 Now I have already written some holiday reports and we are slowly approaching the end… although it doesn’t feel like it yet, the coming stages were a bit longer than the previous ones. After the west of Austria (Linz, Salzburg, Innsbruck) we drove on to South Tyrol!

First stop was the campsite in Corones! I had fallen in love online with the camping barrels – small camping cabins in the shape of barrels made of Swiss stone pine, with their own terrace in front of them and comfortable beds. Camping deluxe so to speak. The barrel was almost even better than we had expected, and in retrospect the time at the camping site was the most beautiful of the whole holiday. (Which again reminded us that we are basically “campers by heart” – after all, we already saw them in southern England when we spontaneously bought a complete set of tent equipment instead of going from B&B to B&B.) I can also recommend the camping site in general, there are new washrooms (even a large children’s washroom), a large playground and a pool. 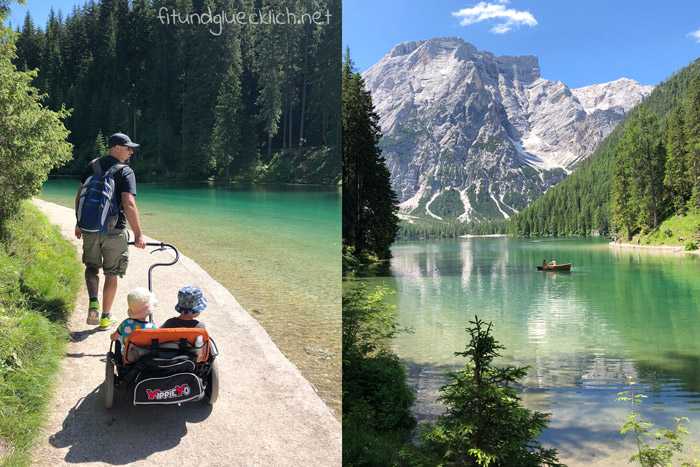 We spent a few days in Corones and made some excursions from there. We had a look at the small city centre of Bruneck, were at the Pragser Wildsee and at the earth pyramids of lawn. The Pragser Wildsee is well known and therefore no insider tip. To be honest, we were even a little disappointed by the crowds of tourists that were pushing around the lake. Which one is beautiful doesn’t get me wrong, unbelievably beautiful even (see pictures above). Just a bit overcrowded. So we saw him, walked around a bit, ate an ice cream and off we went to Bruneck. 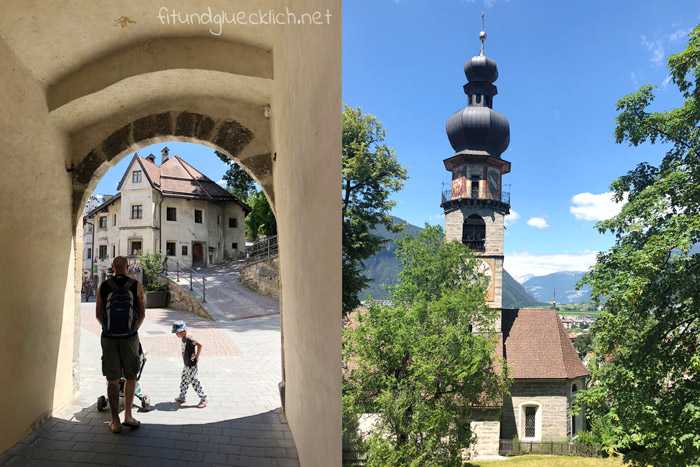 Bruneck is really recommendable, not too big, just a cosy small town. We also went up to the castle, where you can find a museum of Reinhold Messner (but that was closed that day).

Before we went further south we had a look at the earth pyramids of lawn. This is a special natural spectacle that reminded me a bit of the Bryce Canyon in America. Erosion removes soft rock and leaves a small pyramid, often with a boulder as a “hat” on top. To the pyramids you walk a short distance through the forest – unfortunately I can’t give an exact time, because the children have walked a big part of the way themselves, and of course we were slower. But I would say roughly between 30 and 60 minutes, depending on the speed. But the way pays off in any case, you are really close to the pyramids. 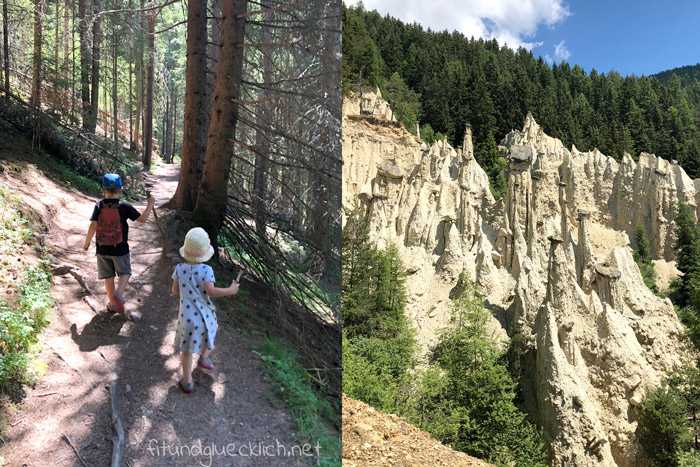 Then we continued south to our next station: Ziano di Fiemme. There we had a nice AirBNB with a small garden, which I can recommend without reservation. Emanuela even left us juice and cake as a small welcome gift and was really incredibly friendly! (With this link you get 30€ travel credit for free!*) 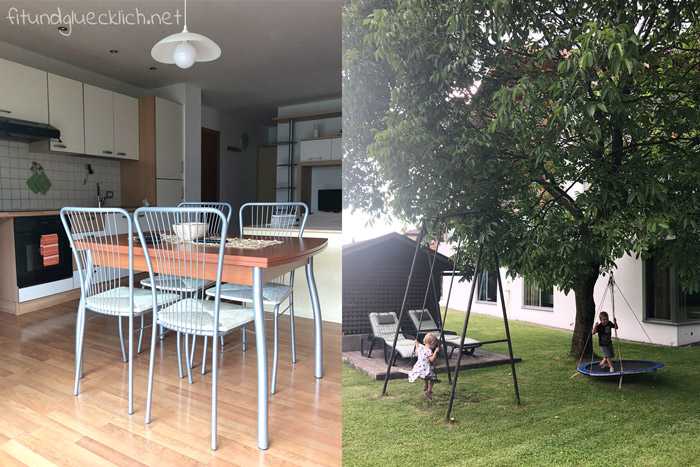 We spent our days in the surrounding area visiting a few playgrounds – this is also necessary when travelling with children. We also had a look at the earth pyramids of Ritten – basically the same phenomenon as in Ritten, but you can drive almost to the vantage point by car and then walk for only about 10 minutes. But you are much further away from the pyramids, as you can see on the pictures. (I think there are more hiking trails to the pyramids, you can get closer – but that was not an option for us with the children on this tour.) 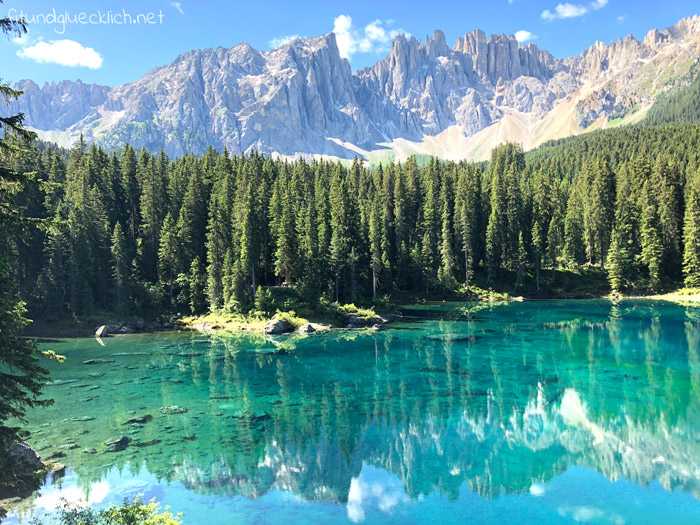 So, and with this we come to my personal South Tyrolean highlight: the Karersee! Like the Pragser Wildsee, it reflects its surroundings and is basically very touristy. But this time there is a great story to it, which also earned him the name Regenbogensee. You can read it here. We were there relatively early and the tourist masses kept within limits. In addition, you have the most beautiful view right after a short walk from the parking lot – many tourists stop there, take a few photos and then leave again. We walked around the lake, which takes about 20 minutes and is relatively unspectacular – but the lake has something magical! 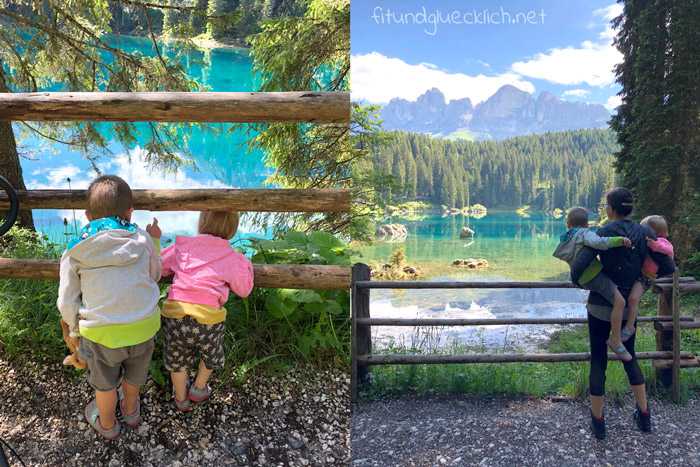 Then it went on for us to Bibione! On the last day we wanted to power up the kids and made a bike tour (Oliver with his not quite 4 years has gone through the forest himself, completely without his woom bike, I was really proud I have to say!). After that there was some trampoline jumping, you’d think they would have been tired for the 3.5 hour ride. Well, not so my kids, they were awake all the time, the ride was really very tedious… but anyway, that was the only time on this road trip that it didn’t go so well! 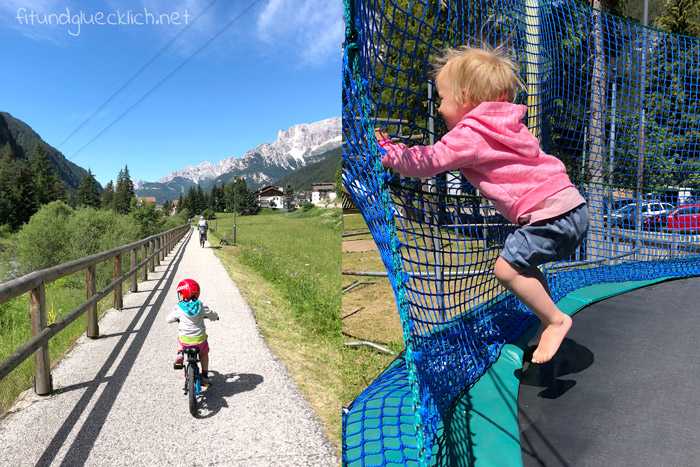 I’ll tell you more about our week in Bibione next time, and at the end we’ll have another overview report with the whole route. Where are you going on holiday this year?

*Advertising, unpaid – this is the normal “Refer a Friend” program of Airbnb – you book via this link you get 30€ discount and I get 20€ credit. Win Win Situation