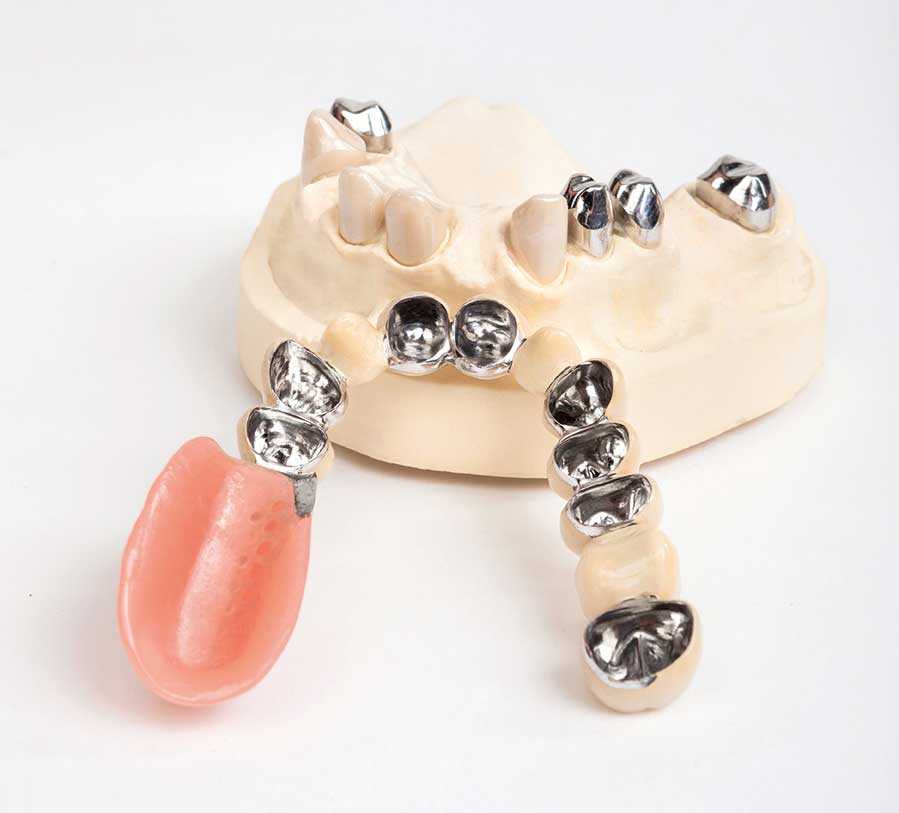 Nowadays, missing teeth can be easily closed with a prosthesis. However, the question arises, which dentures closes the gaps best. Usually, patients can choose between a staple and telescopic prosthesis, but both types of prostheses have advantages and disadvantages that affect both the appearance and the function.

Tooth gaps are not only unaesthetic, they also affect the chewing function. Especially in the front area of ​​the jaw tooth gaps are particularly noticeable. Smaller gaps of up to two teeth can be easily closed with a bridge, while larger tooth spaces require a prosthesis. As a rule, there is the possibility of a staple or telescopic prosthesis, but the prostheses differ both visually and functionally from each other. Since the patient has to bear a large part of the treatment costs himself, the advantages and disadvantages of a brace or telescopic prosthesis should be weighed thoroughly.

Advantages and disadvantages of a clip prosthesis

A staple prosthesis is a relatively simple denture that is attached to the remaining teeth using metal staples. The replaced teeth, which are fixed to a support plate, are made of plastic. The support plate, which is adapted to either the palate or the lower jaw, however, may be made of plastic or a metal alloy.

Enter your data in the form now and get your free consultation.

Clip prostheses are extremely cost effective because the remaining teeth do not need to be prepared. With the help of impressions the dentist creates an exact image of the dentition before the tooth color of the replaced teeth is determined.

Teeth can be damaged

Nowadays, staple prostheses are preferably used as provisional dentures. As soon as teeth have to be extracted for medical reasons, clip prostheses function as a dressing until the wound resulting from tooth extraction has completely healed. Subsequently, for example, a model casting prosthesis can be incorporated. If clip prostheses are worn long-term, damage to the jawbone can be the result, because the dentures rest on the alveolar ridge.

Advantages and disadvantages of a telescopic prosthesis

Telescopic prostheses, which offer many advantages both visually and functionally, are especially indicated when the posterior posterior teeth are missing. Unlike a staple prosthesis, a telescopic prosthesis guarantees optimal support so that the function of the dentition is completely established. However, this type of tooth replacement is considerably more expensive because the existing teeth must be prepared.

Telescopic prostheses consist of so-called inner and outer telescopes and a prosthetic part, which rests on the oral mucosa. Telescopic prostheses are effectively a combination of prosthesis and bridge, because one part of the denture is firmly connected to the remaining teeth while the other part is in contact with the gum only.

How exactly does a telescopic prosthesis work??

Since the telescopic prosthesis is supported by several teeth, the chewing pressure can be distributed optimally, so that individual teeth are not unnecessarily burdened. If more teeth need to be extracted, the telescopic prosthesis is easily extended by a few teeth. The only drawback is that the teeth can work much more voluminously than crowns, because the artificial teeth are composed of two telescopes, in other words a double crown.

Brace and telescope prostheses are ideal for bridging larger gaps in the teeth, especially in the posterior region. Compared to a staple prosthesis, a telescopic prosthesis enjoys many advantages, which is why it is preferably incorporated. As it is placed on the remaining teeth with the help of inner and outer telescopes, it is a real asset not only visually, but also functionally. Nowadays, clip prostheses are often used as a temporary solution to heal the wounds of extracted teeth. Due to the glands, however, the remaining teeth can loosen, resulting in more gaps in the teeth. A telescopic prosthesis, however, can be extended by several teeth.

Have all your questions been clarified in the article? Do not hesitate to contact us. Write us an email to: [email protected] or call us on 05141360010

Your feedback is important to us!