You are here: Home / Event tips »Interesting machines at DASA

Strange machines in the DASA

DASA will be showcasing exhibits of a special kind in Dortmund from October 4th: Little curious machines that come to life at the push of a button and that captivate children and adults alike. The exhibits can be seen for the first time in NRW. 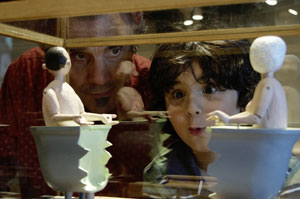 An adult and a child in the exhibition "The secret life of the machines" (Photo: Daniel Gasenzer, DASA) From October 4 to December 30, 2009, the German Occupational Safety and Health Exhibition (DASA) is showing the special exhibition "The Secret Life of Machines". 40 wonderful and curious machines from the British “Cabaret Mechanical Theater” are exhibited. The mechanics of the wooden machines are set in motion, do tell short Stories – partly in the middle of life, partly absolutely fantastic.

Peter Markey originally sold his mechanical works of art in the late 1970s through a small shop in Cornwell as wooden children’s toys. Over time, however, it became clear that it wasn’t just children who had friends at the machines. In May 1983 the "Cabaret Mechanical Theater" was founded. The visitors came and now paid to use twist grips or buttons to see the machines in action. The CMT has been showing its machine art in London since 1985.

For children aged eight and over, a two-hour workshop is also offered during the autumn and Christmas holidays, which conveys the structure, function and mode of operation of the essential components and guides them in the construction of their own machines. The dates for the autumn holidays have already been set: Tuesday, October 13 and 20, 10 a.m. to 12 p.m. and Thursday, October 15 and 22, 2 p.m. to 4 p.m. Registrations are accepted at 0231 / 9071-2645.

Other events in NRW that may interest you

At the Soester All Saints’ Fair, things are going well

The Soester Allerheiligenkirmes – the largest old town fair in Europe – "rounds off" this year and celebrates its birthday celebrations from November 8th to 12th with "old friends" and ten rides and amusement shops that make a stop in Soest for the first time as well as a new marquee -Gastronomy. More…

Extra layer in the DASA

Not long and the long night of industrial culture is just around the corner. With the ExtraSchicht, 48 venues celebrate a huge cultural spectacle for the Ruhr area on Saturday, June 25, 2016. The DASA Arbeitswelt exhibition is at the start from 6 p.m. to 2 a.m. and one of eight locations in Dortmund. More…

LWL-Museum shows the history and culture of sexual identities

In its new exhibition “Homosexualität_en”, the LWL Museum for Art and Culture in Münster has been devoted to people who desire same-sex or who have non-compliant gender identities since Thursday, May 12, 2016. More…

Hotels at the venue

You always want to present the latest event tips and news from NRW to your website visitors?

This is no problem with the free news service of the NRW tourism magazine. Easy to integrate without programming knowledge.

letters to the Editor

Do you have news from interesting events or places to visit for us? Write to our editorial team!

Events by keywords (all keywords):

The NRW tourism magazine informs you about current events and leisure tips in the state of North Rhine-Westphalia. We would also like to bring you closer to the tourist destination NRW.