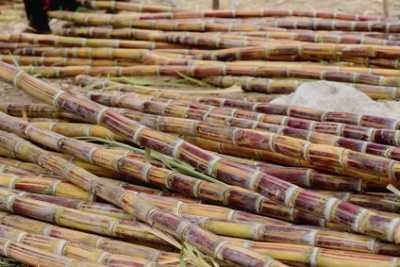 The sugarcane comes from the group of sweet grasses. The plant serves as a raw material supplier for bio-ethanol and table sugar.

You should know about sugar cane

The sugar cane is planted over cuttings. Depending on the seed spacing, 15,000-20,000 plants per hectare are set. After about fourteen days, the cuttings sprout and form roots and stalks. The sugarcane is a monocotyledonous plant. It is reminiscent of grass in its appearance. The individual stalks of the sugar cane can reach a diameter of 20-45 mm.

They have a diameter of about 30 mm and can be up to 6 m high. The panicle-shaped flowers grow up to 50 cm long. The first harvest takes place nine months to two years after the first planting. The straws of the sugar cane are cut by hand or with sugar cane harvesters directly above the soil. From the remaining stumps another crop can be cut after two months. In this way, a sugarcane field can be harvested around eight times. The individual sugarcane plants can grow up to 22 years old.

The sugar cane was probably already used in the fifth century BC. The origin of the plant is probably in the East Asian region. Other possible areas of origin are New Guinea or China. Through trade relations, the sugarcane reached the Middle East in the first century AD. In Roman antiquity, sugarcane was also used in medicine. The expansion of the Arabian sugarcane spread to Morocco and Sicily as a result of the Arab expansion. To Western Europe, the sugar came only through the Crusades. Sugar cultivation in the conquered and occupied territories was controlled by the Crusaders. Then Venetian merchants took over the sale and brought the sugarcane to Western Europe.

Sugar was a luxury item at the time. The processing was difficult and the cultivation expensive. Thus, sugar was not affordable for ordinary citizens. This did not change until the mid-eighteenth century when sugar was extracted from beetroot and sugar beet. Today, cane sugar can be offered on the world market much cheaper than sugar from beet. However, since beet sugar was subsidized in the EU, cane sugar could not prevail in Europe and also in Germany for a long time. However, since the opening of the European market by the World Trade Organization, cane sugar has become more important.

Importance for the health

Although it is often claimed, sugar from sugar cane is no healthier than beet sugar. Neither cane sugar nor whole cane sugar are wholesome sugars. They have undergone numerous processing processes and receive only a few original ingredients.

Although some of the minerals are still present, the health benefits are still low. Significantly healthier is the molasses. Molasses is a viscous, dark brown syrup that is a byproduct of sugar production. When sugar is refined, the juice is produced as a by-product. The first centrifugation of the sugar leaves a fairly bright molasses. This still contains plenty of sugar crystals. From the bright molasses can win sugar again. It leaves a dark and syrupy juice back. The more often this syrup is boiled, the darker and tighter the molasses becomes. Already after the third boil, molasses contains virtually no sugar.

The many minerals of the sugarcane remain preserved. Until the 18th century molasses was sold exclusively by pharmacists. It was not used as a sweetener but as a medicine. In many countries, the sugar mass was even considered a panacea and was used to treat cancer. For the treatment of cancer, the molasses is no longer used today, but there are still indications. Molasses can be used as a cough syrup. It facilitates breathing and helps with coughing up. Molasses contains a lot of iron. As an iron supplier, it is therefore particularly well suited for people with anemia.

Whole cane sugar contains minerals like iron, magnesium and calcium. B vitamins are also included. The proportion of vitamins and minerals is a maximum of 5%. The sugar cane molasses contains significantly more minerals, vitamins and trace elements. In addition, the sugar cane molasses has many phytochemicals. These are both anti-inflammatory and antioxidant effects attributed. Due to the high sugar content, the molasses is a good source of energy. Due to the considerable content of calcium, iron, potassium and magnesium, molasses is also suitable for athletes.

People with sucrose intolerance can not tolerate cane sugar. When sugar is consumed from sugar cane, they cause stomach cramps, vomiting, diarrhea, bloating and nausea. Conspicuously often those affected also have upper respiratory tract disorders and viral infections.

It is similar to sugar from domestic sugar beet. Sugar is a very insensitive food. Nevertheless, some things should be considered during storage. The sugar should be transferred from its packaging to an airtight can. Only then is the sugar sufficiently protected from moisture. Damp sugar tends to form molds and yeasts. Since the cane sugar can take on foreign odors, it should not be stored together with foods that give off a strong smell. When properly stored, sugar can be kept for several years.

Sugar is contained in many foods. It can be found, for example, in jams, chocolate, biscuits, salad dressings, gherkins and ketchup. Sugar can not only sweet, but also soften acid or reduce bitter tastes. In jams, sugar is not only used as a sweetener, it also supports the shelf life of the products.

Sugar is not just a sweetener when it comes to baking. It forms tanning and flavoring agents and ensures that the dough becomes elastic and stable. In protein-containing foods, sugar also serves to stabilize. Sugar from sugar beet can usually be replaced one-to-one with cane sugar. When making cocktails sugar from sugar cane also plays a special role. Thus, for example, for the production of Caipirinha in addition to limes and rum mandatory cane sugar is needed.