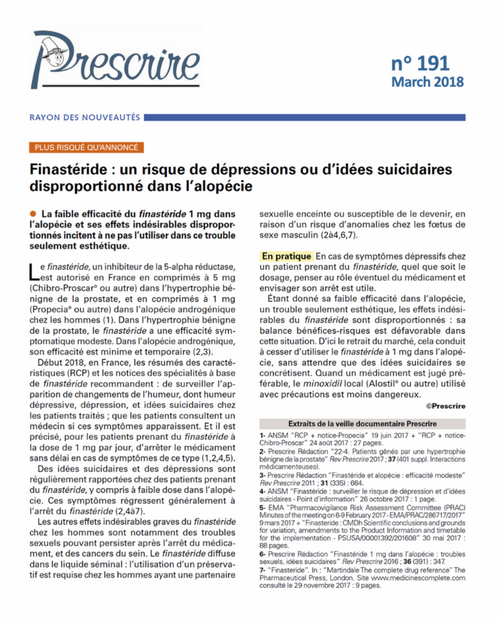 People with depression not only experience great suffering, but have lost all hope through the illness. They do not believe that they can be helped and their condition ever improves.

In order to escape this unbearable condition, the desire may arise to no longer want to live.

Anyone who thinks of suicide or knows endangered people should immediately medical help search.

In Germany, approximately 10,000 people die each year from suicide. These are more people than in traffic (about 3,500), by drugs (about 1,200) and by AIDS (about 400) to death (Statistics 2015). The number of suicide attempts is estimated to be 15 to 20 times higher. Two out of three suicides are committed by men. Especially older men are at an increased risk. In suicide attempts, however, young women are at risk. Although suicide numbers have declined overall since the 1990s, suicide prevention remains urgently needed.

The majority of people who die from suicide have one psychiatric illness suffered (90%), most often from depression (> 50%). In addition, schizophrenia and addictions are also associated with an increased risk of suicide.

The successful treatment The psychiatric illness is thus the best suicide prevention!

Critical external events, which are associated with great hopelessness, such as partnership conflicts, debt, unemployment, chronic illnesses or separations can trigger suicidal acts.

But: The assumption that difficult external conditions alone are a cause of suicide must be contradicted. For one thing, only a small proportion of respondents react with suicidal behavior, while the great majority of people are able to handle these “blows of fate.” This is also shown in scientific studies in which no association of suicides and unemployment or suicides and the presence of a serious physical illness was found.

depressions are the Main cause of suicides. A successful treatment Depression reduces the risk of suicidal behavior.

The 4-level intervention program German Depressive Aid Foundation is the most widely practiced and best scientifically studied suicide prevention program. Launched in 2001 and 2002 as a model project “Nuremberg Alliance Against Depression”, it brings together the following goals:

Activities that simultaneously target 4 levels of care (1st co-operation with primary care physicians, 2nd PR activities, 3rd multiplication training, and 4th offerings for those affected and relatives) enabled the number of suicidal acts (suicides and suicides) to be reduced within two years Suicide attempts) are reduced by 24% – compared to the baseline year and a control region.

Which alarm signs should be taken seriously?

What can you do if you know an acutely suicidal person??

The most important thing in acute suicidality is not to remain alone in the seemingly hopeless situation, but to entrust to another person despite often existing shame and guilt feelings.

If a person is directly threatened with suicide, but he is in any way no longer accessible for a conversation and is not willing to seek help together, then the ambulance should be contacted for his protection. Please tell the emergency physician exactly about the situation and do not leave the affected person alone until the arrival of the emergency physician.
The most important thing is to gain time, because the desire to die is almost always a temporary condition and even in difficult life situations usually the courage to return.

The media comes at the reporting Suicide and suicide attempts a big responsibility too. Through dramatizing or even heroic as well as detailed depiction suicidal acts can be triggered in suicidal people. This is as Copycat suicide described in reference to the experience with the novel Goethe’s “The Suffering of the Young”. The aim of the foundation is therefore to win over the media. In our media guide “Take care, be aware” are appropriate recommendations for coverage of suicides included, such as, to present the suicide not as suicide or in a melodramatic manner, but as a result of a psychiatric illness that could have been avoided by consistent treatment.

AGUS e.V. (Relatives to suicide)
The association AGUS supports relatives after suicide by counseling, care and mediation of contacts of those affected.

NASPRO (National Suicide Prevention Program for Germany)
To date, more than 90 institutions, organizations and associations have joined forces in this initiative to work on suicide prevention in Germany.

friends for life
The association offers diverse information about suicide and depression for mainly adolescents and young adults.

neuhland
Information for suicidal children and adolescents as well as professionals.

Hegerl, U., Mergl, R., Havers, I., Schmidtke, A., Lehfeld, H., Niklewski, G., & Althaus, D. (2010). Sustainable effects on suicidality were found for the Nuremberg alliance against depression. European Archives of Psychiatry and Clinical Neuroscience, 260 (5).