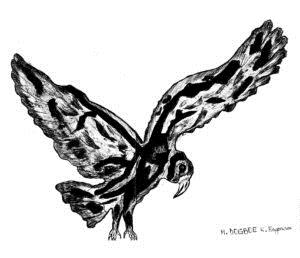 Awako is this ewe-Word for a black kite. These birds are considered particularly skillful, powerful and self-confident in Togo. That is why the Togolese national soccer team is named after him. He is a role model for the students. And we named our club after this bird: Awako e.V.

Until the end of 2016, the school project in Togo was looked after by the Kakadu Children’s Aid. KAKADU e.V. is also responsible for a number of other projects. – We would like to thank you for the many years of support! – In the meantime, the "school project" has become a large school. A long process has shown that it makes sense to set up your own association to support the school: Awako e.V.

The elementary school "Les miracles de Yahvé" was founded in 1988 by teachers and a parents’ initiative. It is located in the home village of Kossi Dikpor, in Sanguéra-Klémé, about 16 km northwest of Lomé. Sanguéra, like all of southern Togo, was mainly inhabited by Ewe. Meanwhile, many other ethnic groups also live in Lomé and the wider area. French is generally spoken at school.

Le miracle de Yahve is a Private school and a école laïque, i.e. a non-religious or denominational school. – The teaching staff and student body belong to different religions and denominations. Peaceful coexistence is a matter of course. 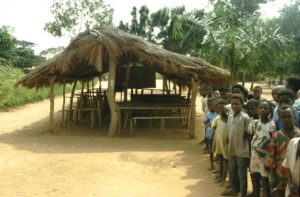 The teachers started teaching outdoors, only equipped with primitive seating, a little school supplies and three thatched roofs, which broke regularly during a storm.

Kossi and Hanne Dikpor decided in 1994 to support the school project. – Since then, donations from Germany – in addition to the annual school fees of just over € 20 – have ensured a secure one salary of teachers. 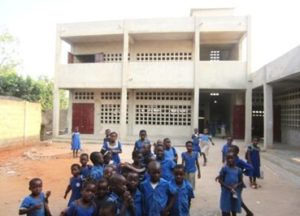 A permanent school building was completed at the end of 2005. It has since been expanded several times. For the school year 2016/17, 1005 pupils attended the school. They are taught by around 20 teachers.

The school is very well recognized in the region because it has the best final results and the lowest diarrhea rate in the area. For years.