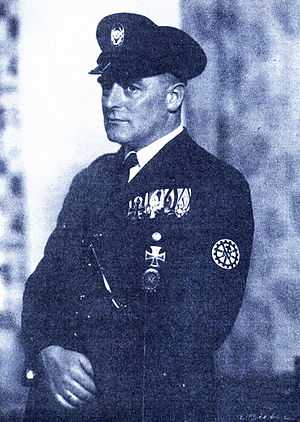 The Emergency Technical Assistance (TN or Teno) was an empire-wide organization originally involved in providing emergency work "wild", often politically motivated strikes in establishments that were defined as vital. From their proponents from the military, politics, administration, economy and large parts of the bourgeoisie as indispensable power against the "red strike terror" was praised, the technical emergency relief of their opponents from the left party spectrum and many unions as counterrevolutionary and directed against the workers "Scabs Guard" branded. After the troubled first year of the Weimar Republic, the focus was shifted to civil protection and, at the beginning of the 1930s, to civilian air defense. From 1936, the technical emergency aid gradually became one "technical auxiliary police force" converted under the Ordnungspolizei. During the Second World War, the technical emergency aid technical units for both the air protection in the Reich territory and in the occupied territories in the wake of the Wehrmacht.

The technical emergency aid (TN or Teno) goes back to the Technical Department (TA) of the Guards Cavalry Division, by the Pioneer Lt. Otto Lummitzsch (1886-1962, board or Reichsleiter of Technical Relief 1919-1934) from soldiers of technical army troops and the Navy in was formed in Berlin on January 12, 1919, on the days of the Spartaku Uprising. The task of this Technical Free Corps should be to carry out emergency work in the case of strikes in such establishments as have been considered vital, unless the staff members were responsible for doing so. These included utilities for gas, water and electricity as well as the transport and transport industries, hospitals, manufacturing and processing companies in the food industry, etc. Other units were set up according to Berlin model in other military circles of the empire. As soon it became clear that the military units were not sufficient for the fulfillment of the given tasks, additional technical time volunteer units were set up primarily consisting of students. For these additional forces came early on the name "Technical emergency assistance" in use. In Bavaria, student volunteers formed such units, which were subordinated to the command of the Reichswehr group command 4.

As with other units of the provisional Reichswehr, the Technical Department also claimed that it would be objected to by the Allies as unauthorized military replacement formations. In contrast, there was a rapidly growing need to have a technically pre-trained reserve reserve for the tasks mentioned. The same procedure was followed as in the Resistance Departments, transforming the Technical Department and its temporary volunteer organizations into a civilian organization "at the Reich Ministry of the Interior" around. On 30 September 1919, the technical emergency aid was established across the empire and spun off on November 28, 1919 from the Reichswehr. She now traded as "Working group of specifically technically trained workers" to combat general public emergencies. The Reich government deliberately kept the legal status vague and provisional, since a deployment of technical emergency aid should not violate the coalition right guaranteed by the Reich constitution and the neutrality of the state in labor disputes. Nonetheless, large sections of the political left and the unions saw technical assistance in the form of a strikebreaking organization.

The establishment of the Bavarian Technical Emergency Relief as a civil organization was completed in mid-December 1919. On the basis of the previous Zeitwillwilligenverbände initially two provincial districts were formed, which were merged but soon for administrative reasons to a state district of Bavaria, based in Munich.

While the Kapp-Lüttwitz putsch took place in Berlin on March 13, 1920, Commander of the Reichswehr Group Command 4, General Arnold Ritter von Möhl (1867-1944), made his own attack on March 14, 1920, against the elected state government. which led two days later for the establishment of the former governor of Upper Bavaria, Gustav Ritter von Kahr (BVP, 1862-1934, Prime Minister 1920-1921), as Prime Minister. 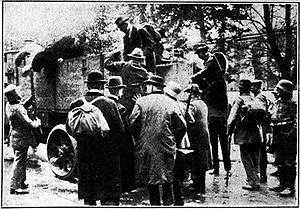 On March 14, 1920, the workers in the Bavarian cities also joined the general strike. Originally started to ward off the Berlin coup, this was there soon against the dismissal of the elected government under Johannes Hoffmann (SPD, 1867-1930, Prime Minister 1919-1920). In contrast to other parts of the empire, however, no uniform strike front could be established, because the Christian unions could not decide to strike and the Bavarian peasants even threatened with a supply strike against the workers. Kahr sat down next to the resident forces in defense of the strike on the technical emergency aid. In Munich, 1,190 emergency workers arrived at the alarm stations, of which then actually 730 were used: So alone 300 emergency workers were used for the delivery service of the post, more for printing and billposting government announcements, others in turn to ensure the food and coal supply. In addition, a ride was organized with cars and motorcycles to bring both the emergency workers as quickly as possible to the respective focal points of the action to be able to carry out food transports and courier trips. Last but not least, the technical emergency service continued to operate gas and electricity utilities, including the modern large power plant Franken in Nuremberg.

Construction and organization in Bavaria 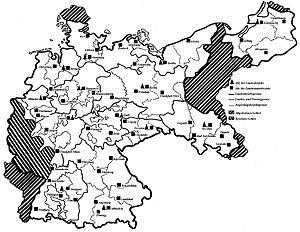 Initially, the construction of technical emergency aid in Bavaria was sluggish until the March events of 1920. In the second half of 1920, there were already around 10,000 members in a total of 120 local groups, which were administered by 10 provincial subdivisions. At the height of organizational development in 1924/25, the Technical Relief Service in Bavaria had over 170 local groups. Members of technical and craft occupations from the bourgeois middle class formed the bulk of the task forces, with students and students also played a major role. In contrast, workers remained underrepresented in the organization, largely because of the distance of most trade unions to emergency technical assistance.

In Munich was on 11 July 1921 by decree of the Interior Ministry a "Notbann" educated. This spin-off, which was neither recognized by the management of Technical Assistance nor by the trade unions, was launched after Technical Assistance refused to take part in the general strike on 10 June 1921 in protest against the previous day’s assassination of the leader of the USPD faction Landtag, Karl Gareis (USPD, 1889-1921), an emergency newspaper to print. the "Notbann" However, only a temporary existence was granted.

Activities of the technical emergency assistance

Even after the March events of 1920, technical emergency aid was called on during various industrial disputes and was also used in comparatively few cases. The focus in Bavaria was on transport workers strikes and labor disputes in the producing and processing food industry. From the railway officials strike in early February 1922, which covered the entire north and the middle of the empire and led to a large-scale deployment of technical emergency aid, Bavaria remained untouched.

The largest stake took place on the occasion of the brewery strike from 27 March to 2 April 1923: nationwide in 22 cities strike at the height of galloping hyperinflation about 10,000 employees for wage supplements. While in Schwaben and Lower Franconia, the emergency work was carried out by the strikers themselves, several hundred emergency workers moved on the orders of the police in Munich, Nuremberg-Fürth, Rosenheim, Planegg (Munich) and Regensburg in numerous breweries to feed the brewery horses, to take over the operation of the refrigeration plants and the preservation of the supplies from ruin.

From 22 September to 11 November 1924, a total of 456 emergency workers in the stricken state-owned iron and steel works Luitpoldhütte in Amberg put the blast furnaces into operation, thereby also ensuring the supply of electricity and gas to the population (59,832 working hours).

Thereafter, there were no more work-related missions of the Bavarian Technical Emergency.

The guidelines of the emergency technical assistance provided from the outset also for use in cases of force majeure or major accidents. Particularly active was the Bavarian technical emergency aid in the field of flood protection in association with the local volunteer fire departments: In May / June 1926 at Kempten, Babenhausen (Lkr Unterallgäu), Augsburg and especially at Donauwörth were several TN water fortresses with 183 Nothelfern in use. End of September 1927 followed various missions in southern Bavaria. During the ice winter in February 1929, the emergency technical assistance had to move to a dam blasting near Munich to protect a substation from flooding. Overall, the reporting year 1928/29 was the most active in the Bavarian Technical Emergency since its founding.

Also in the large and forest fire fighting helpers came again and again to the employment. For example, emergency helpers helped in the fire of the Regensburg shipyard of Maschinenfabrik Dresden-Uebigau at the end of January 1922 or during a forest fire on 12 June 1925 in Herrnhütte near Nuremberg.

An equipment of the emergency workers with uniform clothing, equipment or even emergency vehicles was not available at that time. Only shortly before the beginning of the Second World War motorized riot trains were set up in larger local groups, which should be equipped and structured according to a uniform scheme. For mountain regions even off-road Steyr vehicles were developed and occasionally assigned to the local groups (eg Landshut). In many places, as in Nuremberg, however, also used trucks were rebuilt in own contribution of the emergency workers, since the budget of the technical emergency aid did not allow a nationwide equipment.