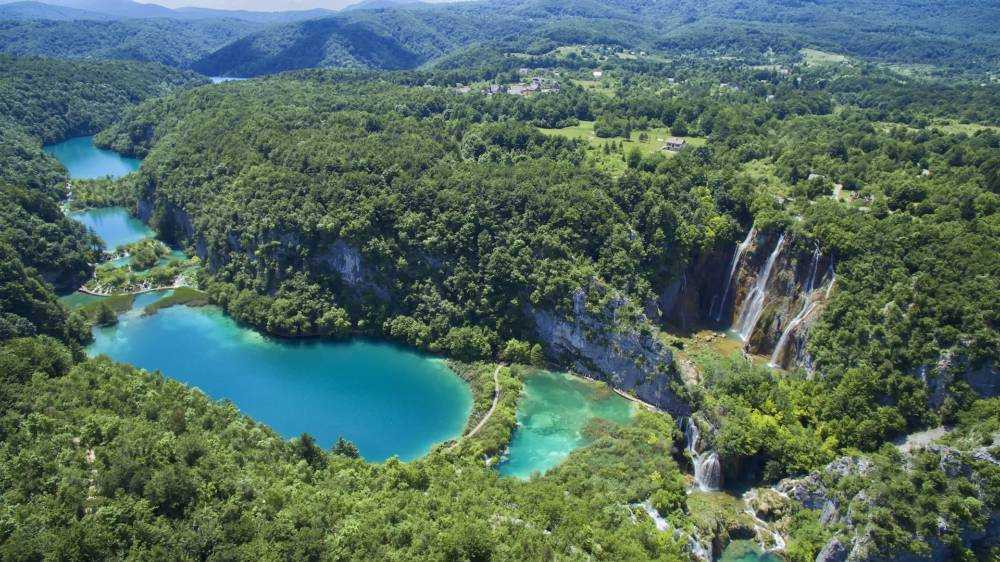 Although Croatia only made it to second place at the World Cup, it is considered the winner of hearts. The players can now return to their home country, which is becoming more and more popular as a holiday destination thanks to its beautiful coasts and islands. But it is also worth a detour into the hinterland: only a stone’s throw away from the Adriatic coast, visitors can discover unique lakes and natural wonders.

The largest and oldest national park in Croatia is situated in a mountainous karst area in the Lika region. Highlight of the park are the 16 lakes, which are cascaded and shimmer turquoise. The National Park has been a UNESCO World Heritage Site since 1979 and is worth a visit not only for its lakes but also for its unique flora and fauna. A visitor enthuses about Tripadvisor: “The terrain is huge, you could spend days in it. Different routes lead the visitors through the woods and a new waterfall splashes around every corner”.

View from above of the unique water landscape in the Plitvice Lakes National ParkPhoto: Ivo Biocina

There are also waterfalls in the Krka National Park in southern Croatia. The park got its name in 1985 from the river Krka, which flows through it. Besides the seven waterfalls, the Visovac Lake is particularly worth seeing. In the middle is the island of the same name, where a Franciscan monastery and a church have been located since 1445, surrounded by a magnificent garden. The boat trip to the island takes about 45 minutes. 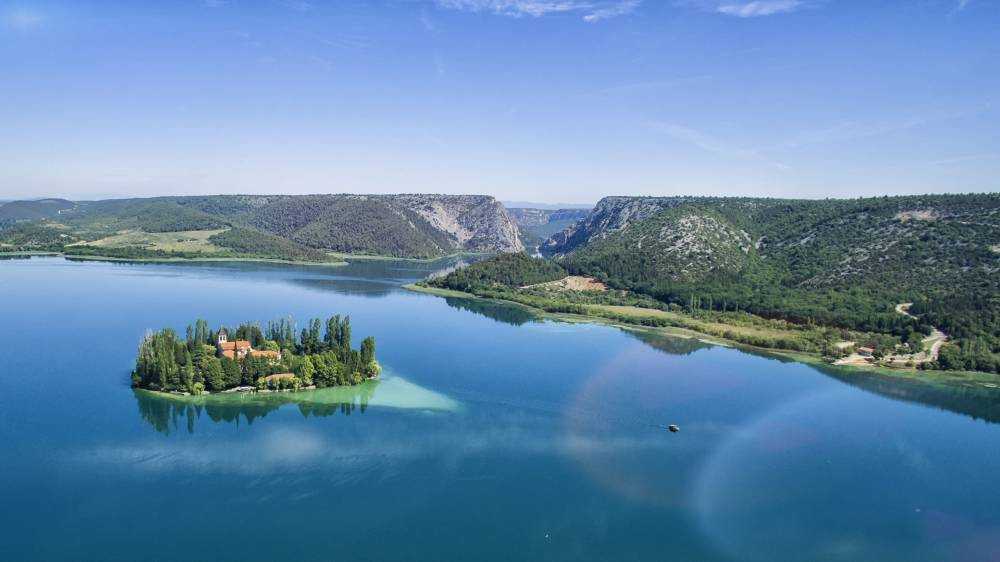 The island of Mljet, situated in the very south of Croatia not far from Dubrovnik, is known for its special landscape with many holm oaks and pines. The Mljet National Park makes up the largest part of the island and borders on the two saltwater lakes, the large Lake Veliko and the small Lake Malo. Many fortresses and monuments bear witness to the cultural heritage of the island, for example the very well preserved monastery at Veliko Jezero. Nature lovers can enjoy the untouched beauty of the landscape, olive groves, vineyards and dense forests. 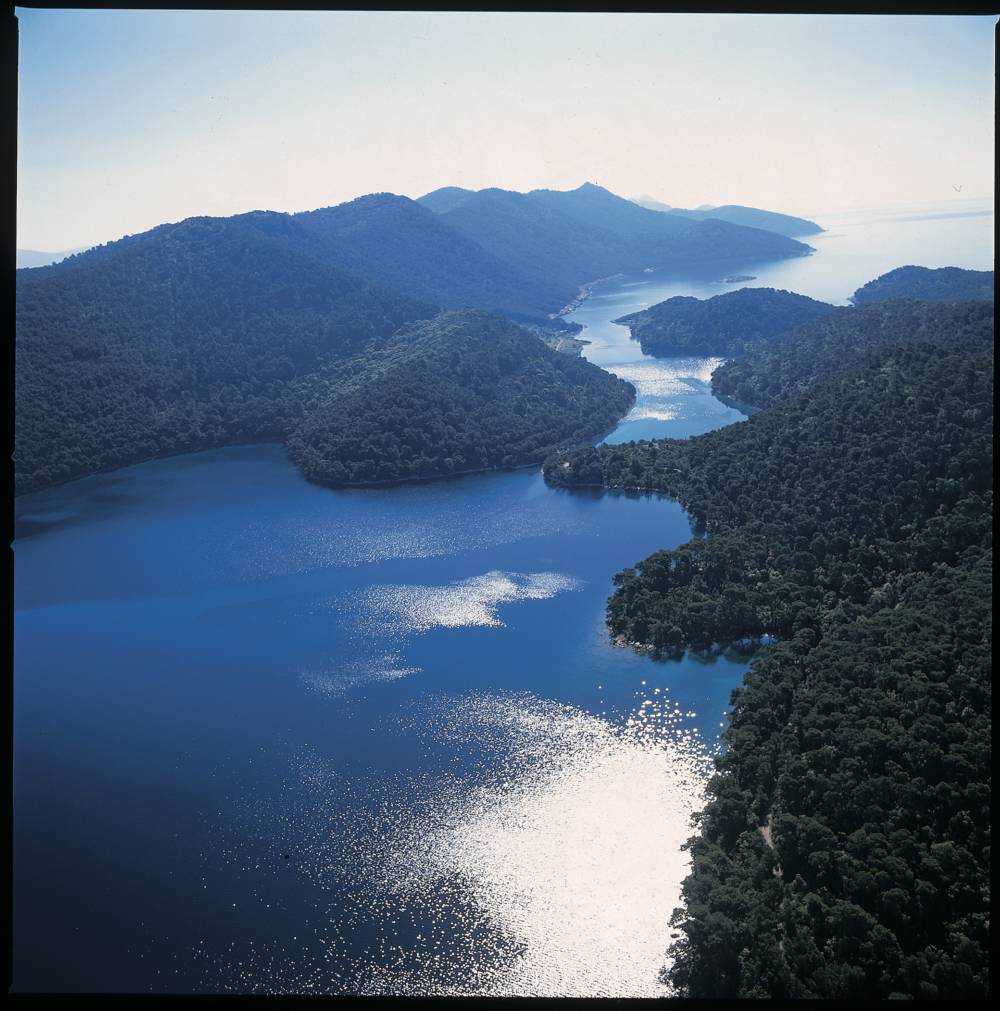 View over the big and the small lake on the island MljetPhoto: Juraj Kopac

Lake Vrana extends parallel to the coast and is the largest natural lake in Croatia. It is located in the protected Vransko Nature Park in Dalmatia, between Zadar and Šibenik. The surroundings of the lake is the only swamp area on the Croatian coast. Another special feature of the park is the bird sanctuary, which offers an almost untouched natural habitat for birds. 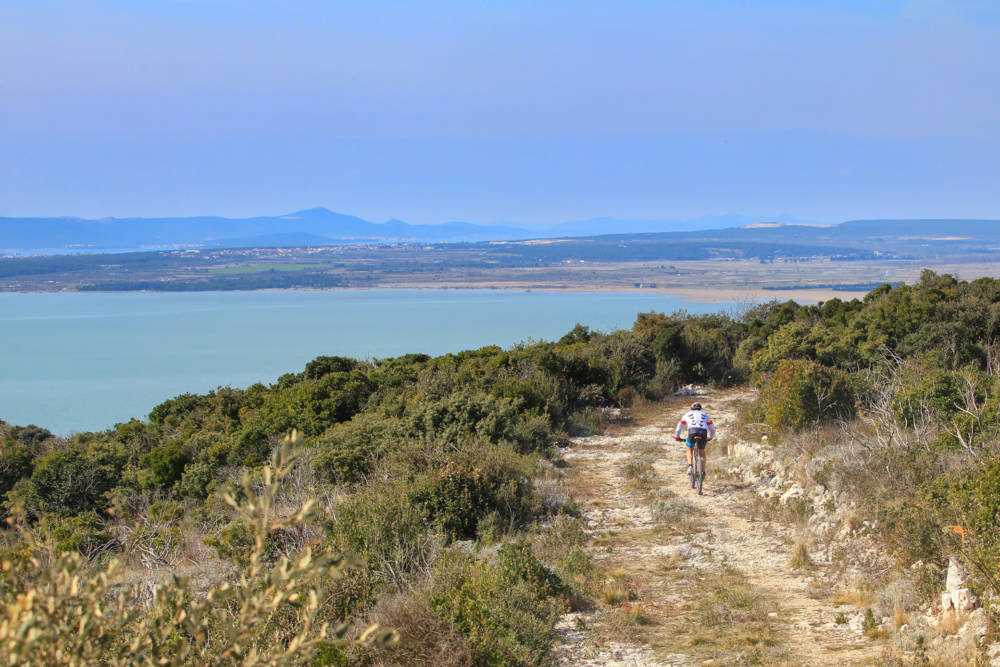 The area around Lake Vrana is also ideal for cycling toursPhoto: Denis Peros

The Red Lake (Croatian: Crveno Jezero) is a huge collapse doline filled with water, with a surface diameter of about 200 metres and a depth of almost 290 metres. The karst lake near the town of Imotski in the Dalmatian hinterland is known for its numerous caves and high cliffs. According to the Croatian National Tourist Board, the largest explored depth is about 530 metres. The water flows out of the basin through underground waterways below the level of the lake bottom. The lake owes its name to the reddish-brown colour of the surrounding rocks. 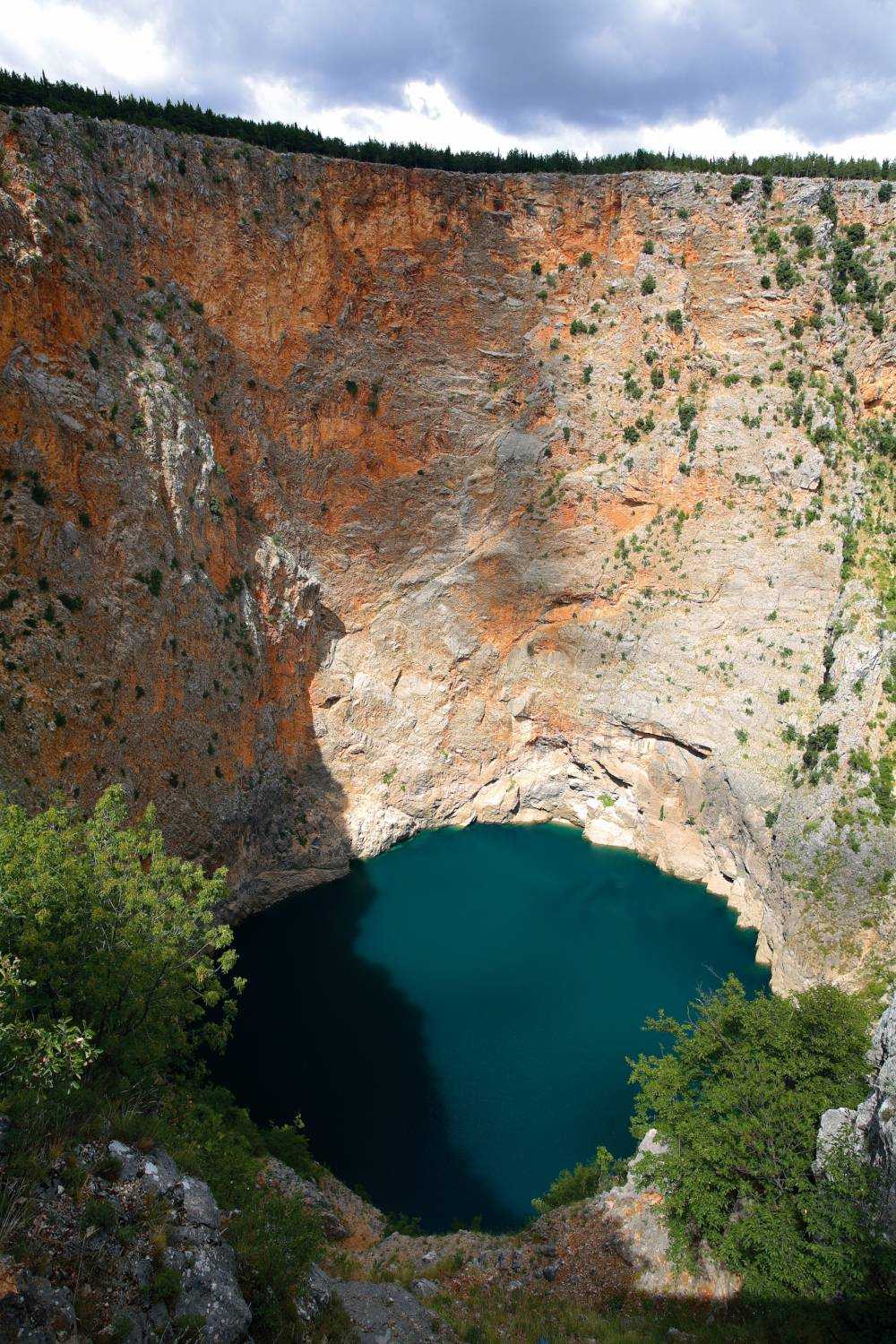 The Blue Lake (Croatian: Modro Jezero), like the nearby Red Lake, lies in a deep funnel. It is also a collapse doline, with a diameter of 600 metres, which is much larger than that of the Red Lake. The total depth of the crater, measured from the upper rim, is about 220 metres, while the water depth varies according to the season. In 1914 the water level reached a record depth of 114 metres, flooding the southern rim. The lake is used as a bathing lake in summer and is a popular destination for hikes. 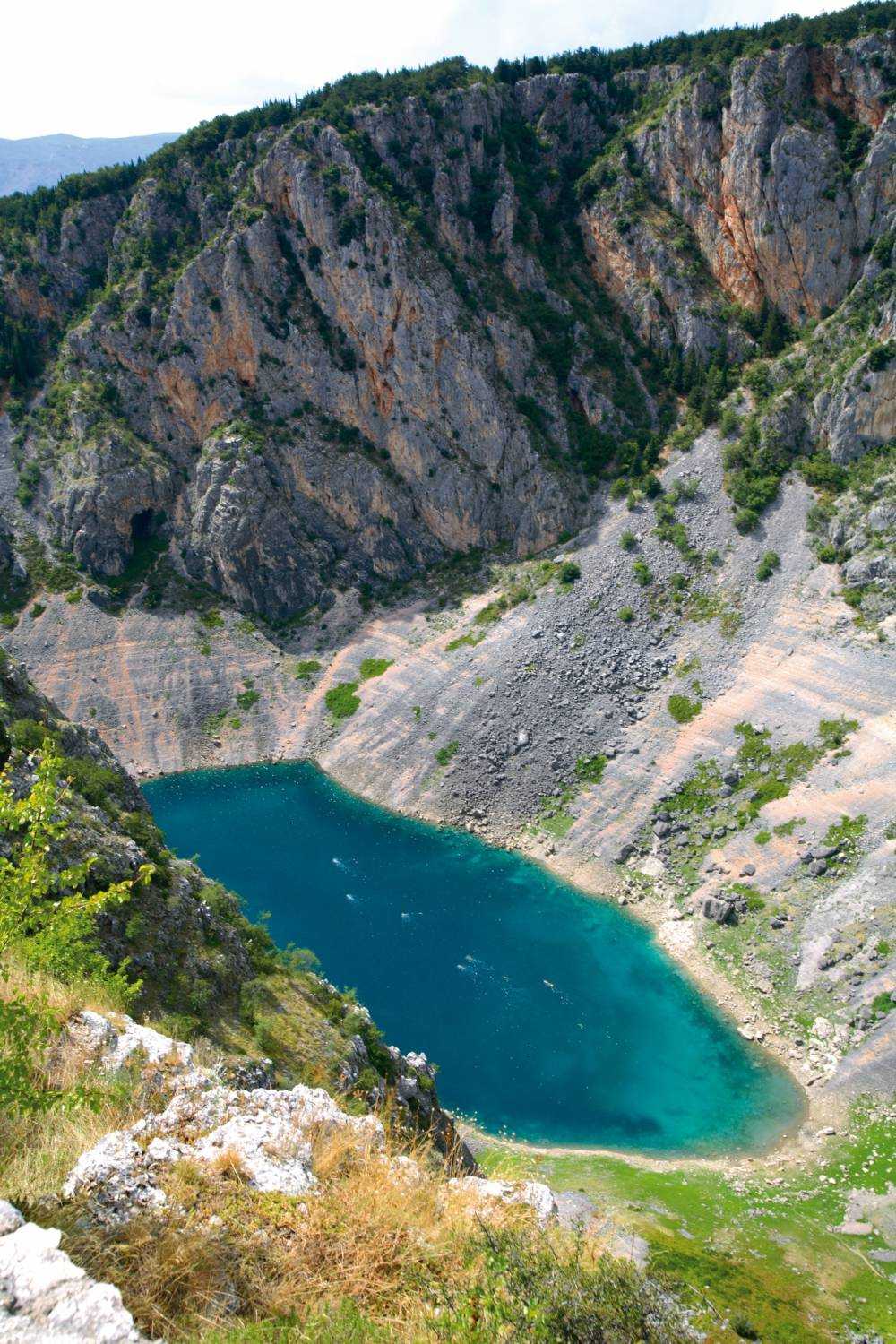 The Blue Lake owes its name to its intensely shimmering colourFoto: Sergio Gobbo

Only separated from the sea by a steep coast is the saltwater lake Mir (in German “Frieden”, see also large photo above). It is located in the middle of the nature park Telašćica, on the island Dugi Otok, and its water temperature is always two to three degrees higher than in the surrounding sea. The water of the lake is shallow, salty and not completely separated from the nearby sea. During the tide, the lake basin is filled with sea water through the cracks in the subsoil. Nearby are the impressive 160 meter high cliffs of Stene. With a bit of luck you can catch a glimpse of dolphins swimming by, and you should not miss the paradisiacal beach of Sakarun, famous for its white sand. 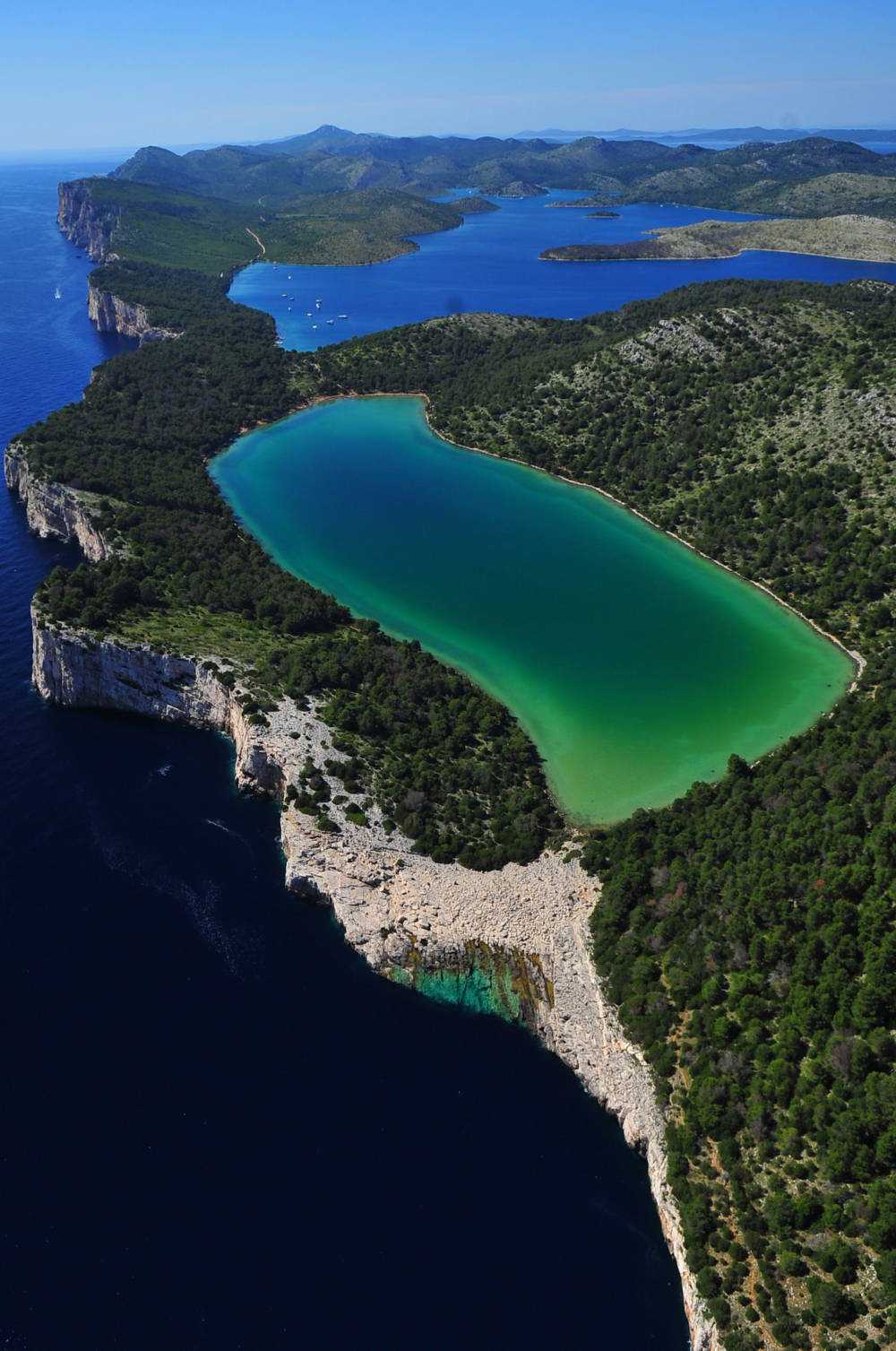