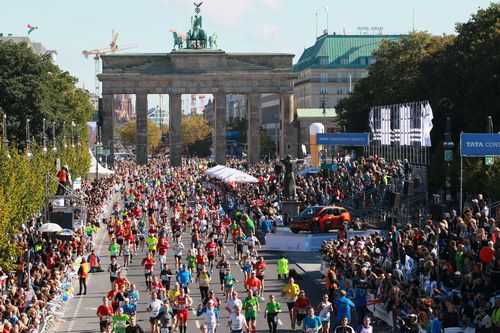 Be the biggest marathon in Germany: Berlin Marathon 2019

The Berlin marathon was held for the first time in 1974. Back then 286 runners from four nations took part. In 2018 we had about 40,000 athletes from 122 nations. The popularity is rising. For the event in september 2019, more than 10,000 runners have secured via the website their participation shortly after activation of the registration login.

With the number of athletes rising, the numbers of visitors and supporters have steadily increased as well. Up to 1 million sports enthusiasts line up along the marathon route.

The Berlin Marathon is for all long-distance runners a dream come true, because the route is considered one of the fastest marathons in the world. Between the start "Street of the 17th of June" and finish line at the Brandenburg Gate four world records have been set here since 2003 alone. For non professional runners the desire to be part of this event is immense. The Berlin marathon 2014 places were gone shortly after the registration online, and therefore we can expect a record participation again this year.

The Berlin marathon 2018 wants to lead the runners pass the main attractions of the German capital. Starting at the "Street of the 17th of June" the route leads west to the Victory Column. Through district "Moabit" it goes back east Passing the Reichstag and the Chancellery offices. In Berlin-Mitte it goes past the Berlin Dome and the TV Tower; along the Strausberg square and then South towards the town hall Schoeneberg. Potsdam Square and the Brandenburg Gate. Among the numerous fans, which line up the route, wants to be many music groups motivating the runners during their quest.

Same as with the Berlin Marathon 2018 runners should book early, because the city will be booked out for this marathon weekend. The relexa hotel is in the immediate vicinity of Potsdamer Platz and therefore not very convenient, but also geared to the special needs of marathon runners. 6.00am and check-out time is on the way , If needed we can arrange a massage service.

Are you a marathon runner and would you like to come to Berlin? We have the perfect room deal for you. Our team has adapted to the characteristics of the marathon runners and created an optimal offer for you. This offer includes a pasta buffet the night before, breakfast already from 5.30am and of course at extended check-out time, so you can take a shower after the race. You also have the possibility to book massage treatments. Ask us or book online here.