You didn’t look for a minute and it happened – the little gold treasure fell off the monkey bars. And now? What are indications of a concussion?? When must You drive the child to the hospital? And if it is a concussion, what should be considered in the following days?

A fall of the child on the head happened quickly and often happens. Mostly some tears flow and there is a bump to admire, which sometimes turns out to be quite stately. Then it is usually enough to dry the tears, soothe the little unfortunate raven and cool the bump a little.

If but the following symptoms of concussion are added, If a doctor is called in: Your child is unresponsive or even briefly passed out immediately after the event, he cannot remember what happened, complains of a severe headache (if he can already speak), he is sick or vomits.

These are clear evidence of a concussion and depending on the extent, inpatient monitoring in the hospital is necessary and sensible.

If your child is bleeding from the nose or ear, even though it did not fall directly on it, this may indicate an injury to the inside of the head and must be clarified further. The condition of the bump also says something about what is happening: if it is very hard, nothing worse has usually happened. However, if the bump feels soft like a gel cushion, the skull bone could be broken.

What happens in the hospital if a concussion is suspected?

In the hospital, your child is first thoroughly examined physically and neurologically. If it Surveillance in the hospital gives evidence of a concussion necessary. The child is connected to a monitor overnight so that changes in heart rate and oxygen saturation are noticed immediately. The blood pressure will be checked regularly, the pupil reaction will be tested and how quickly the child wakes up – at night. This everything is uncomfortable, but important in order to detect possible bleeding in the brain as soon as possible. Then you have to hurry to prevent further damage. To localize the bleeding, a computer tomogram is made. In the worst case, surgery must be carried out directly so that irreparable brain damage can be avoided. 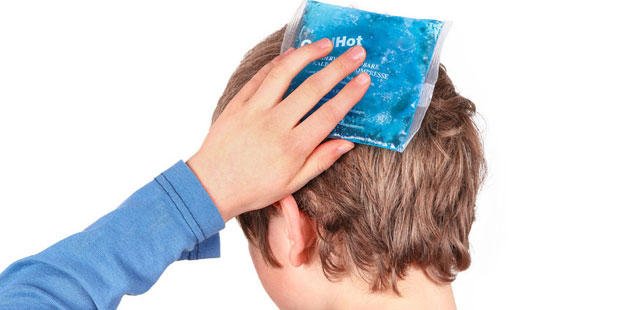 If there are no signs of a concussion, it is enough to cool the bump after a fall on the head Photo: Fotolia

Fortunately, bleeding from the brain when falling from a normal height is very rare and that most Children leave the hospital cheerfully after two days. This should be monitored for as long as possible to rule out cerebral bleeding. Then you think: "What was that good for – nothing happened!" Enjoy! But if the rare case does happen and there is bleeding in the head, you would not have been happy with your life if you had not been in the hospital for surveillance.

How long after a concussion?

After a concussion, it is important that your child spares himself a few days – even if it is difficult. In particular, sports, television, long reading and wild games are taboo: this is just too strenuous for the head. If you have bumped your arm, you protect it a bit until it is fully operational again. If the children do not take care after a concussion, they often suffer from headaches, difficulty concentrating, dizziness and nausea for much longer than if they do without the mentioned activities for a week or two (depending on the severity of the concussion) or limit them to a minimum.