The favourite tours of the tz editors

The Leutaschklamm: For ghosts and goblins 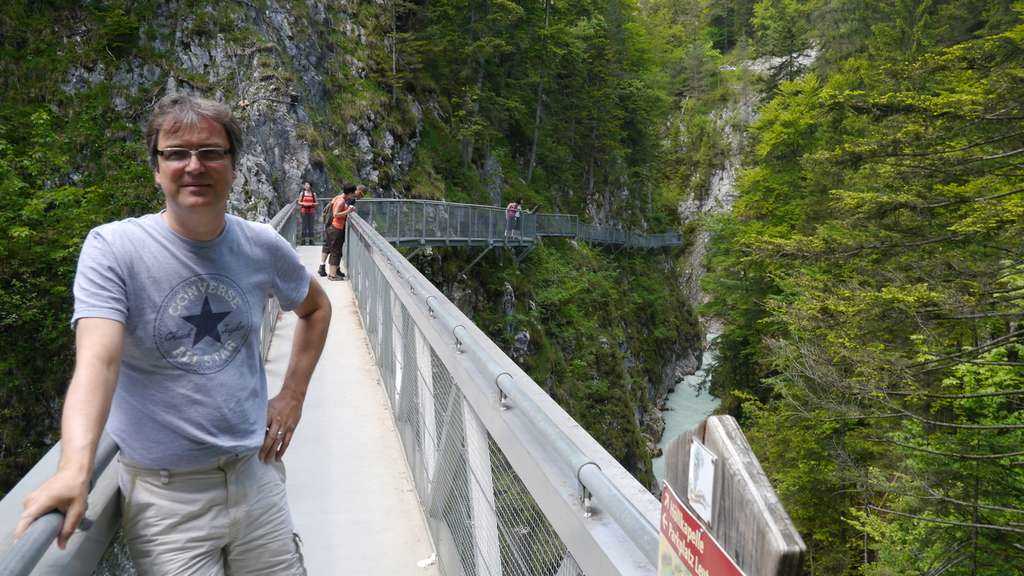 Munich – In the summer series “Die Lieblingstouren der tz-Redakteure” it’s the Leutaschklamm’s turn this time – for goblins and goblins.

“Daddy, I can’t go on.” On this tour not even heard. “How much further is it?” Not once asked this question. If you want to take your children on a relaxed and exciting hike through the Karwendel, we recommend the Leutaschklamm gorge near Mittenwald. An easy hike in lofty heights with breathtaking views of a thundering mountain river, a thrilling tour on the Koboldpfad, the Klammgeistweg and the Wasserfallsteig to the origins of the Alps. The ghost gorge is the little sister of the famous Partnach gorge, a bit hidden and hardly signposted.

The most stressful part is undoubtedly the approach from Munich. Because it leads – especially on weekends unfortunately – over the A95 and through Garmisch-Partenkirchen. After the traffic jam has cleared at some point, we drive on to Mittenwald. From here there are two possibilities as starting point. Either you start in the village in the street Am Köberl (look for a parking place nearby). The small chapel and the canal serve as orientation point. From there it goes about 800 meters in southwestern direction to the entrance to the waterfall trail, where the 1.9 km long Koboldpfad also begins.

Or in Mittenwald you turn off onto the Leutascher Straße, which leads you on winding paths through the Leutasch Valley and through a dense mountain forest to Tyrol. Shortly after the border there is a spacious car park on the left. Five euros per car is due here. Then start your tour along the Klammgeistweg. This is our preferred option. 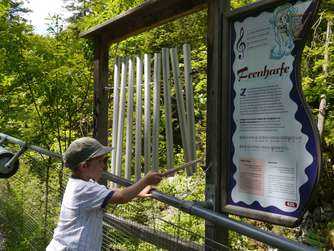 So the firm (!) shoes tied, the snack packed – and off we go. The first 500 meters lead us through a seemingly normal forest, but already the first information boards of the Klammgeist and the first wooden footbridges let us notice. The adventure begins with the mysterious rainbow snake. On a large display board, it not only explains to us why a rainbow forms in the ghost gorge, it also turns the cosy forest path into the dizzying metal path high above Leutasch.

Looking down through the bars is not for the faint hearted, but for adventurous children who can’t get enough of the water, the whirlpools, the rocks and the ledges below us. Wasn’t there a shadow? Didn’t a piece of wood swim past? What would it actually be like if this holder there …? Don’t worry: the construction is the best workmanship, just ten years old.

And as if the way wasn’t already exciting enough, after almost every bend we come across the ghost of a ravine. Sometimes it challenges young and old to play on the oversized glockenspiel, pardon the fairy harp of course. Sometimes he animates to test the ghost echo or the thunder roll. Not a single one of the 850 metres to the Panorama Bridge is even rudimentary boring.

Panorama bridge? It spans the Leutasch completely and is not only the photo motif on our hike, but also the end point of the Klammgeistweg and the starting point of the Koboldpfad.

A few steps up we leave the breathtaking gorge and set off on a 1.9 kilometre circular path through the forest. Here the goblins on the information boards explain how the mountains were formed, what the power of the glaciers is all about, tell us about ghostly humps and show us magic stones. That they have to be magical is also clear to the parents. How else could the offspring manage to hike so attentively …! 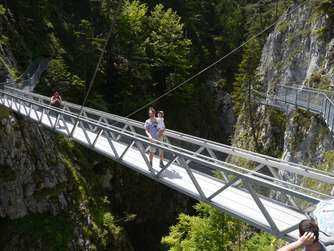 The goblin trail also leads us to the two stop-off points of this tour: the mountain restaurant Gletscherschliff, situated between meadow and forest, and the Mittenwalder Klammkiosk. It not only has a wonderful small beer garden, but is also the starting point for the third way on our tour, the waterfall path. If we have seen the Leutasch from above before and heard it, we now go into the middle of the thundering, bubbling, bear-strong gorge. Two Euro (children: one Euro) is the entrance fee for the 200 meter long path on wooden planks. They are more than a hundred years old, in places slippery and the complete contrast to Metal Climb and Panorama Bridge. It’s wet, it’s cold, and at the end of the path we stand in front of the 23-metre-high waterfall, don’t understand our own words anymore and feel so small in the face of nature’s violence. A spectacle without any spectacle at all, unspoilt, powerful, natural. Here, however, caution is advised: Small children, if they want to go on their way at all, should definitely be taken by the hand! After this climax at the bottom of the gorge, we make our way back, climb up the Koboldpfad to the Panoramabrücke and leave the gorge again via the Klammgeistweg. On the way home there’s only one question this time. And it’s not: “Daddy, how long will it take?” But: “Daddy, when are we going back here?”

Walking time: Klammgeistweg, Koboldpfad and Wasserfallsteig together with children about two hours. However, the route is the destination on this tour, which is why the time is extended very quickly.

Starting and finishing point: Parking at the end of the Leutascher Valley in the border area Germany-Austria (on the German side the St2042, on the Austrian side the L14).

Directions: A95 München-Garmisch-Partenkirchen to the end of the motorway, then continue to Mittenwald, in the town via Leutascher Straße to the car park.

The Leutascher Ache, as the Leutascher is officially called, is a left tributary of the Isar. It rises in the Mieminger Mountains in the Ehrwald district and flows into the Isar after the Ghost Gorge at Mittenwald. The Leutascher Ache is one of the cleanest running waters in Tyrol with a continuous water quality class of I.