The skull on the game box of "The Game" is a recognition feature throughout the game and can be found on every card. The presentation alone will make some players feel attracted to the card game, others will use another game on the shelf for exactly that reason – if it weren’t for “The Game” being nominated for the 2015 game of the year.

The subtitle "Play … as long as you can" is the program of the card game. Because in "The Game" the players have to place their own hand cards on four card decks as long as possible, in numerically ascending or descending order and all this as a team! So it is won and lost together. Most of the time, however, the game itself wins, which gives it an inexpressible appeal.

The card game comes with surprisingly few rules and still offers a certain tension. So that the gameplay does not degenerate solely from the discarding of ascending or descending number cards – that would really be nothing new – the game author has added an interesting backward rule as well as guidelines for communication among the players to the game rules. The focus here is clearly on sweating together, supporting together, whereby "The Game" also works very well as a solo game.

A game round ends as soon as a player can no longer discard cards. If there are only a maximum of ten number cards left at this point, the team did a good job, but still lost. If the entire draw pile has been used up and no player has any more cards in hand, they have defeated the game.

You are planning to buy The Game? With a purchase via our button you support this site and our team.

Game accessories from The Game

Detailed rules of the game

Note: The Game also works as a solo game. In this case, the player receives eight cards in hand at the start.

Goal of the game it is to put as many cards from the additional pile on the four rows of cards on display – ideally, of course, all cards.

And this is how it is played: All players play together as a team. The starting player begins, the other players follow one after the other in a clockwise direction. If it is a player’s turn, he must at least two cards place from his hand on any pile next to any row of cards. He may also discard more or even all of his cards in the same turn, if this is possible and makes sense. Then he must have exactly as many Draw cards from the draw pile, how he played before.

Communication between players: It is not allowed to ask for specific numbers during the entire season, so no "does one of you have the 75 or 78"? However, it is entirely permitted to give the players certain hints, for example "You’re welcome until it is my turn to put nothing on the top row "or" In the third row please do not jump too large numbers ".

The filing rules in The Game

A new discard pile is opened next to each of the four row cards. Instead of being placed side by side or laterally, new cards are always placed on the appropriate discard pile. This makes it easier to keep an overview. 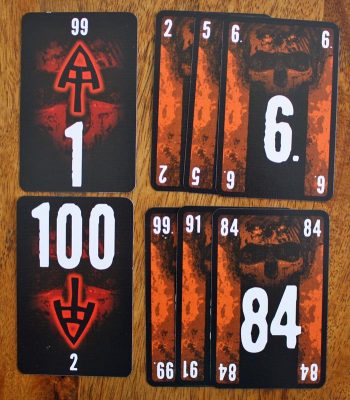 Cards must be placed in ascending or descending order.

In addition to the starting row cards with the number 1 number cards must be stored numerically in ascending order – from 2 to 99. The distances between the individual cards can be as large as desired.

Next to the starting row cards with the number 100 number cards must be stored numerically in descending order – that is, from 99 – 2. The distances between the individual cards can be as large as required.

When discarding a player may place his cards all in a row, as well as distribute them in any order over any number of rows. However, he must lay out at least two cards.

Exception of the filing rule: As soon as the draw pile has been used up, all players may discard only one card in their remaining turns. However, more is still allowed.

The backward trick (the rule of 10)

In the course of the game, the four discard piles grow sometimes evenly, sometimes at different speeds. Sooner or later you run out of storage spaces for your own number cards. To prevent this, you can use the backward trick – ideally at every opportunity. 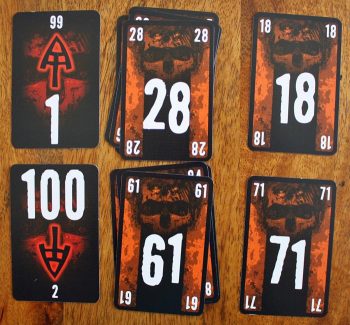 On the discard pile of an ascending row of cards a player may also discard a card with a lower numerical value in his turn if the difference between the two cards is exactly 10.

On the discard pile of a descending row of cards a player may also discard a card with a higher numerical value in his turn if the difference between the two cards is exactly 10.

What else is allowed: A player may also perform the backward trick several times in a row and over different piles – provided that he has the appropriate cards in his hand. In the meantime, he may also put down “normal” number cards in accordance with the standard rules.

End of the game and winner

At the end of the game, all cards that have not been discarded all Players and counted from the draw pile. The sum of the remaining cards gives information about the success of the game.

In the solo game the player receives eight cards in hand and draws eight hand cards after each game round. Otherwise nothing changes in the existing rules of the game. The rules for discarding the four rows of cards and the backward trick also apply in the solo game.

In the professional version players can control the level of difficulty themselves. To do this, you can either increase the minimum number of cards that a player must discard within one turn. Alternatively (or in parallel) you can reduce the number of cards in your hand.

Conclusion on the card game The Game

With his dice game Qwixx, Steffen Benndorf made it onto the nomination list for the Game of the Year in 2013. With “The Game” he succeeds again in this feat. This is interesting in that both Qwixx and “The Game” really don’t reinvent the game wheel. Before Qwixx there were other dice games that could only be played with dice, pen and pad, but of course there are also countless card games in which series of numbers have to be formed in ascending or descending order. Just think of the various horn ox games 6 takes, 11 takes or horn ox. And we also had the cooperative element in a similar game form in the game of the year 2013 winner Hanabi. But Steffen Benndorf seems to have a knack for creating exciting games with little material and short rules.

The game accessories from The Game are very good in terms of quality. One can argue excellently about the design. It’s actually too bleak for a family game. But since the game now lives largely from its arc of tension, the skulls and the dark colors fit again. Here everyone has to decide for themselves. The rules of the game are short, quickly explained and quickly internalized. It has the character of an instant play.

The course of the game is always the same: discard at least two cards and then draw the same number of cards. At the beginning of a new game, the tension curve is still very flat. As a rule, each player has reasonably useful cards in hand, which he can place on the rows of cards that are still empty. In proportion to the number of game rounds, the tension curve then increases quite quickly. The discard pile fills up, the number of useful cards decreases and the players have to work well together so that the backward rule can be used as often as possible.

In our previous game rounds, we always went through different, emotional phases in roughly this order: first confident of victory, then first doubts paired with optimism, despair and frustration in constant alternation with hope and a build-up against defeat, finally (depending on the player type) anger, disappointment , maybe a laugh out of desperation. And then usually follows the unanimous wish: Again!

The Game is guaranteed not to reinvent the card game, the design is neither happy nor family-friendly and the title of the game is somehow meaningless and strange. So what! It is still fun, interactive, cooperative and also playable as a solo game. And even if you get the hang of it and win regularly, the level of difficulty can be increased at will.