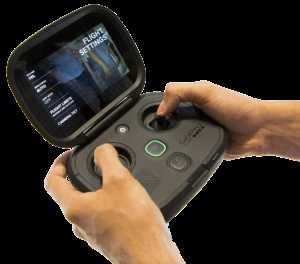 We waited a long time: Now the time has come! GoPro has introduced the new Karma Drone. We were able to take a closer look at the quadrocopter at the Photokina 2016 and show here what the GoPro Karma can do and why it has disappointed our expectations.

The peculiarities of GoPro Karma

It immediately becomes clear that GoPro has taken a new direction in Karma. The rotor arms and the landing gear of the copter are foldable, so that the drone can be better transported. Rather uncharacteristic is the position of the camera. For example, while DJI has placed the camera of the Phantom 4 below the copter, the GoPro is mounted slightly upstream. This should be prevented on fast flights that the propellers are seen in the picture. Since the phantom series of DJI still has to deal with this problem, GoPro has succeeded here a good solution.

The Karma is controlled with a remote control, which is very good in the hand and leaves a robust impression. In the lid of the remote control, a touch display is integrated, with which various flight modes can be set. A flight simulator helps you learn to fly with karma. There is a home button on the remote control. When you press this button, a dialogue appears on the display, and you can choose whether Karma fly back to the starting point or the current position of the remote control.

On the display, you can track the image of the camera during the flight (First Person View). A second person can help you fly by adjusting the camera settings on the smartphone or tablet using the GoPro Passenger app.

Why I am disappointed with the karma

The fact that GoPro particularly excites action sportspeople with its cameras is not exactly a secret. In this target group, many would be happy if the copter automatically tracks the athlete’s activities in the air. But GoPro did not integrate Follow-Me mode in his karma drone, which surprised me a lot.

Another disappointment is the lens. Although proudly announcing that the fisheye effect disturbing aerial photography has been eliminated. But that does not apply to the highest resolution (UHD / 4K). Thus, there was not really an improvement in this area to the predecessor models, in which the fisheye effect in the lower resolutions could already be significantly reduced.

The features of the drone has GoPro also presented in this video.

The scope of delivery of the GoPro Karma

The Karma drone comes with the usual accessories of a quadrocopter. In addition, GoPro goes one step further and adds a handheld gimbal that lets you record videos on the ground without camera shake. Another positive note is that a backpack for the Karma is included.

Here is the complete listing of the delivery: 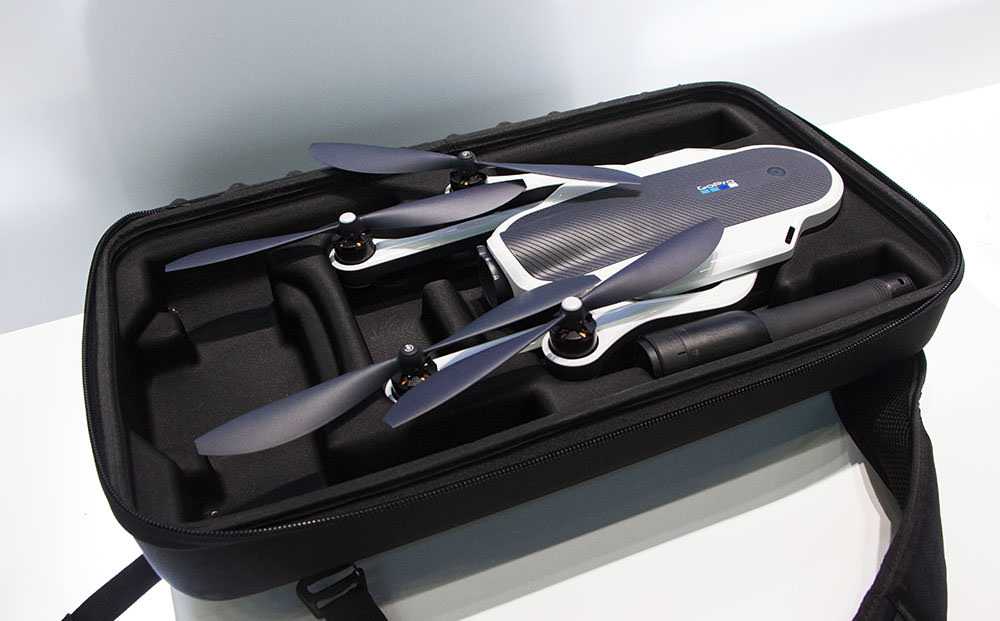 A GoPro camera has to be bought additionally. The Karma is currently with the GoPro Hero 4 Black & Silver, GoPro Hero 5 and Hero 5 Session compatible. The possible resolution varies depending on the camera used. With the waterproof GoPro Hero 5 even RAW images can be photographed.

My conclusion to the GoPro Karma drone

When I saw GoPro Karma for the first time at market launch, I was pretty excited. The quadrocopter made a very good impression. But a closer look at the specifications then disappointed me. For example, it lacks a follow me mode, the achieved airspeeds are quite low and there are no sensors that detect obstacles or monitor the distance to the ground. For the retail price of around 1,400 euros (with camera) I find that a poor performance. The competition has since e.g. With the DJI Mavic Pro much more to offer at a comparable price. That’s why I recommend Karma only if you already have a GoPro and you really want to use it in the air. But there are now very good other drones with camera, which are a better alternative in most cases.

Unfortunately, GoPro’s karma failed to make a big impact on drones. That’s why GoPro had to stop the development of Karma and dismiss the entire Copter department. An improvement of the Karma is therefore unfortunately no longer to be expected.