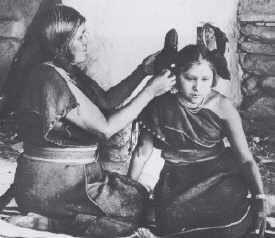 When an Indian child was born, it was immediately accepted into the community of the tribe. Every tribe was particularly happy about boys, as a boy increased the number of warriors. The baby received the name a few days after its birth.
See naming

At the age of a few weeks, the toddler was placed on a portable cradle frame. In this way, the mother could carry the child on her back, hang it on a pole in a teepee, attach it to a carrying frame – travois – or even hang it on a horse’s saddle. In the case of the Indians, the child was brought upright instead of lying down as we know it. The advantage of this position was that the child was able to perceive its surroundings early on. Until third The child was called "Papoose" at the age of one. The word comes from the language of the Narragansett (cultural area northeast). As with all peoples, the offspring were treated lovingly and tenderly by their parents.

With the Plain Indians, the children were brought up to typical Indian self-control already in infancy by simply placing screaming children in a bush and letting them cry out. It soon noticed that there was no point in howling or sobbing. This measure to bring a child to rest was very important for the prairie Indians, since a crying baby could make an enemy aware of the camp. As soon as a child had outgrown the baby carrier, it moved on all fours in the tent. It quickly learned to recognize danger spots or was warned about it by older people. From their mothers, the little ones were brought up to be tough, insensitive children who defied all weather and knew how to adapt to the climatic conditions – extreme heat or cold. They loved to emulate the adults in their games. The girls’ favorite toys were miniature-sized dolls and teepees made of deerskin. Bow and arrow were particularly popular with the boys and hunting and fighting scenes were imitated by the warriors.

The older children took on the task of getting the younger ones used to cleanliness. So they showed them where to relieve themselves outside the camp. At a young age, a child was introduced to riding. At the age of three, a child was sitting on a horse’s back. The girls were trained by the mothers around the house. They were taught how to collect in firewood, fetch water from the stream, sew and embroider, and tan furs, thus preparing them for the role of a wife. The boys received the knowledge of a hunter and a warrior from their fathers. They were acquainted with the animals of the forest and the plains, got to know the species of fish in lakes and rivers, received training in reading tracks, sneaking up on game, sharpening their senses such as hearing, visual acuity and smell, in the field to orientate and how to survive in the wild without food.

When the children reached puberty, the girls and boys were prohibited from playing by the adults. The young boys accompanied the father for the first time on a bison hunt or on a war campaign. Here the son was able to demonstrate his courage and skill before he received the dignity of a warrior. The girls had to stay near the family teepee and practice all domestic duties. For her part, the mother began to look for a suitable son-in-law for her daughter.

The grandparents familiarized the grandchildren with the traditions of the tribe. In this way they got to know the myths and legends as well as the songs and dances of the tribe.

Indian names contained descriptions, magical meanings, or even innuendos. A baby got its name from a medicine man or a relative on his father’s side. The whole Dorf took part in this celebration. The child could look for an animal, a brave deed it had accomplished, a natural phenomenon such as B. Thunder from the mountains are named.

A woman kept the name she had once received. A man replaced his name with a special act, where he e.g. B. showed bravery, by meeting an extraordinary animal or by a dream that inspired him. If a man had a malformation, he was certain of this characteristic appearance as a nickname.