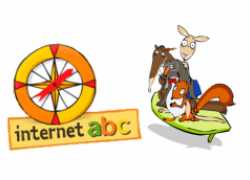 Media education has had a firm place in the profile of the Kreßberg school for many years. Almost two years ago, we began to use the comprehensive, free materials of the Internet ABC in grades 3 to 6 of our primary, secondary and secondary school throughout. The offer of the Internet ABC registered association supports us with the varied switching of medium authority and sets thereby already at home – it offers even for parents practical assistance and information. The playful concept, on which the interactive tasks and worksheets are based, is very well received by the children in class. Teaching pupils how to use the Internet safely is an important part of our educational mission for us in our media-influenced world. We were all the more delighted to receive the LFK award from the headmaster Köhnlein at the Didacta, as well as to be allowed to carry the seal Internet-ABC Schule 2014/2015 on our homepage when Schule am Kreßberg. The seal acknowledges the commitment of our school to make pupils fit for the Internet.

The offer of the Internet-ABC e.V. and the materials at a glanceThe core of the offer is the ad-free website for children and parents, www.internet-abc.de. The encyclopedia explains technical terms, there are game and learning software tips and under “Computer & Internet” the children will find four theme packages for independent or joint learning. These are “missions” on which Captain Eddie – the leading figure – accompanies the children and teaches them Internet skills in a playful way. The missions and tasks are not only available online, but also on the free educational game CD-ROM. The material can even be used on computers without an Internet connection. A mission consists of several chapters and once a mission has been solved, the teacher can print out a certificate with the children’s names. It is also motivating for children to prove their acquired knowledge with the Internet abc surfing licence. The children can then print out the surf certificate with their name. Analogous to the chapters, each with around seven to ten stations, there are worksheets and a task checklist to tick off. This makes it very flexible to use the material for teaching purposes. For every task that can be solved on the website or CD-Rom, there are instructions for parents and teachers and a separate parent information page with lots of further information and links. The most important things parents need to know for “children’s access to the net” are summarised in compact brochures. The complete material package was sent to us free of charge by the Landesanstalt für Kommunikation (LFK): Teacher manuals, CD-ROMs for each pupil and brochures for the parents.

In the third and fourth grades, the children work weekly in a German lesson with the teaching material – usually in three blocks within a school year of about eight to nine weeks.

The knowledge is packaged for children: The leading figure “Captain Eddie” accompanies them through the “missions” and helps them to master the tasks alone or in groups. In our German computer lessons, the students can work in groups of two or three at the stations of a chapter at their own pace. This is recommended because the students in a class usually have very different levels of computer skills. They should help each other in a whisper. For each chapter there is a checklist with which the teacher keeps track of which “station” a group is at, i.e. which tasks have already been solved. In the fourth grade, for example, a group comes to me when the text has been read or listened to and the task has been solved correctly. I tick off the checklist and give the OK to print out. Instead of solving the interactive tasks, the children also worked on the worksheets in some chapters. The interactive tasks can also be done by the pupils as homework: online or on CD-Rom.

Each station of a chapter contains an information text for reading or listening. The students can then use interactive tasks to check whether they have been paying attention. Errors are displayed immediately and the task can be improved. The direct feedback after the task has been solved makes the teaching material ideal for teaching at an individual pace.

Our students were enthusiastic about it. They also enjoyed mastering the tasks in twos or threes. I also introduced two things as a ritual in the Internet ABC class: On the one hand the common beginning in a “start phase” and the final entry into a computer learning diary in Word – at least in the fourth grade. On the other hand, there are “expert points” when a group is the first to work on a station. They get a “checker cap” from me on the computer. Other students can see who they can ask for help with the task – this relieves me as a teacher. And the children are additionally motivated by the allocation of my “expert points”.

In the fifth and sixth grade, the students work with my colleague mainly on the constructive missions, for example on social networks or on the topic “Chat: Or conversation on the Internet”. If necessary, forgotten missions are repeated so that the surfing licence is well deservedly worn by every student.

Internet-ABC-Siegel – Bewerbung und VergabeDem Schulleiter der Schule am Kreßberg, S. Köhnlein, has been concerned about media education for years. Thus there is a computer AG and due to the school profile in one German lesson per week the medium and computer handling are purposefully promoted. We could ideally use this lesson for the use of Internet ABC materials in classes 3 and 4. To the application as Internet ABC school the employment of the instruction material and completing the Surfschein of each pupil belong, the execution of a parents information evening and if necessary a teacher training to it. After our application Rector S. Köhnlein could now receive the seal “Internet-ABC-School” within the DIDACTA in March. Even each child received a small acknowledgment, which we presented to the enthusiastic pupils in the Internet ABC lessons.

Tabea Rügamer – teacher at the Kreßberg school and multimedia consultant

From the first issue of Kreßberg’s school newspaper – online: