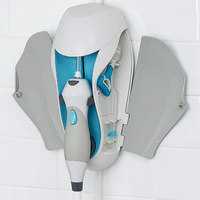 The invention of the oral irrigator

The cleaning of the interdental spaces has always been a problem in dental care. Read here how the two tinkerers wanted to change over 50 years ago.

If one considers the development of oral hygiene and especially the cleaning of interdental spaces, one must look further back in human history than one might initially suspect. Already the Neanderthals knew the principle of the tooth cleaning and their meaning over 40.000 years ago. Due to the lack of medical care, a disease at the time meant terrible pain for weeks or months and in the worst case even death. As archaeological finds confirm, small wooden sticks have been used to clean teeth and interstices. This is far from today’s standards, of course, but better than nothing.

Over the millennia and in the different cultures many different techniques and tools were used. In ancient Rome, for example, stone dust was used, which, although not particularly gentle, kept the teeth effectively clean and white. In addition, early forms of mouthwash had been developed. On the other hand, the Greeks used rough linen cloths and dentifrices made of various herbs and tree bark. However, interdental spaces were a problem in all past civilizations and it was only at the beginning of the 19th century that dentists advocated the use of silk threads for cleaning. In the 1940s, Dr. Charles Brass invented the nylon silk floss, which was not only more elastic than the natural product, but also provided significantly better cleaning results. The name Zahn “silk”, however, owes all current variants still the original natural product.

An engineer and a dentist

In 1962, the next step in the field of interstitial cleaning finally came with the development of the first oral irrigator. The dentist Gerald Moyer and the engineer John Mattingly had teamed up and built after countless attempts the first working prototype of an electric irrigator. Here, a strong, yet tiny water pump was used, which produced a pulsating water jet, with which one could particularly well rinse the interdental spaces. It was not until 1967 that the invention was patented and although originally intended only for professional use by the dentist, sold to private individuals.

The two inventors first named their company Aqua Tec Corp. and this was purchased by Teledyne and later renamed Water Pik. Water Pik is still producing oral irrigators and while being a competitor in the rest of the world, you have a dominant position in the US. This goes so far that the brand name “Waterpik” is often used synonymous with a mouthwash in general. Similar to how fast the pace is for a handkerchief. In addition to oral showers and electric toothbrushes for private use, the Americans also produce accessories and instruments for professional use, as well as shower heads. No wonder in the story.